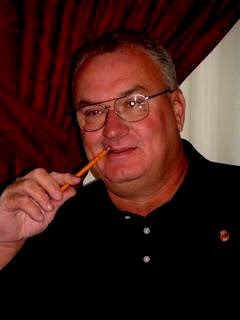 You’ve got to hand it to controversial St. Johns County Sheriff DAVID SHOAR (formerly known as “DAVID HOAR” before he changed his name).

Our St. Johns County Sheriff has a wicked sense of humor. Sheriff SHOAR proved that for all time on March 30, 2011 (when April Fool’s came early this year).

Sheriff SHOAR is one politician who keeps his promises. For example, SHOAR promised WILLIAM B. HARRISS that he would have a job with the Sheriff’s office whenever HARRISS retired as St. Augustine City Manager – a “golden parachute,” in corporate law terms.

Keeping his promise, SHOAR has hired controversial former St. Augustine City Manager WILLIAM B. HARRISS. Kudos to you, Sheriff Shoar – at least you Republicans take care of your own. Too many times, we Democrats “throw our own to the wolves.” (Ask Nancy Pelosi. Ask Lani Guanier).

HARRISS was most noted for his neglect of two African-American communities -- Lincolnville and West Augustine -- and for his environmental crimes, including dumping 40,000 cubic yards of solid waste in our Old City Reservoir.

On June 30, 2010, WILLIAM HARRISS “retired” from the City of St. Augustine. He is not missed. Of course, the St. Augustine Record and the Sheriff’s friends’ faux news site both sang his praises.

We sincerely hope that HARRISS was the last in a long line of Caudillos who ran St. Augustine’s City government into the ground.

Watching City Commission meetings, you can tell they are no longer rehearsed and no longer the fruit of the poisonous tree of Government in the Sunshine law violations. (Once upon a time, in 2006, I was waiting for a special City Commission meeting to start and Commissioner Donald Crichlow walked in, seeing no one else. He asked where everyone was. I said “they’re upstairs at the rehearsal.” Crichlow nodded knowingly, never denying it.

Erstwhile City Manager HARRISS, like other local unaccountables, was in the habit of “polling” Commissioners, a violation of the Sunshine laws. This led to dull meetings, where everyone knew what everyone thought in advance, and everyone knew the outcome of every proposal – no need to hold a Commission meeting when you’ve already broken the Sunshine law (which is a crime that is hardly ever punished or reported in St. Johns County).

No longer is there a cognitive miser in the City Manager’s chair, bullying and bossing City employees, Commissioners and citizens alike, like the very Republican lord of all he surveyed.

Such was not always the case.

After the meeting in April 2005, WILLIAM B. HARRISS’ knickers were apparently in a twist because I raised concerns about the City’s refusal to annex West Augustine neighborhoods, stating that it violated the Fifteenth Amendment for the City to annex all-white areas repeatedly, at the behest of developers and not annex a low-income African-American neighborhood. Committing truth about racism in St. Augustine did not exactly endear me to HARRISS, but I did not cower to power. I wore HARRISS’ scorn as a badge of honor. It took five years, but HARRISS left, angry as ever, taking a fat retirement pension with him (along with the memory of the nature he destroyed and the developers to whom he was a lickspittle).

My parents taught me that are not put on Earth to bow and scrape and beg government officials to obey the law – we have a right to expect democracy.

But under the twelve-year reign of error of our unreconstructed, undemocratic Caudillo -- WILLIAM B. HARRISS -- Lincolnville, West Augustine and other working neighborhoods were treated with disdain and disrespect. That was true both publicly and privately, and particularly at St. Augustine City Commission meetings. In four decades of government-watching, I’ve never seen a more intriguing rogue – he reminds me of James Michael Curley, the longtime Mayor of Boston (model for Frank Skeffington in Frank O’Connor’s political novel, The Last Hurrah). HARRISS did things his way. In a way, I can relate to that. But HARRISS forgot about the rule of law.

HARRISS forgot about humility and honesty.

HARRISS forgot about the duty of government officials to be “just stewards,” protecting our nature and history for future generations.

From inside his City Hall office, City Manager WILLIAM B. HARRISS helped raise money for SHOAR’s campaign. On the loooooong list of SHOAR’s contributors, HARRISS is the second person to give SHOAR a check (SHOAR raised more than $250,000 when he ran in 2004).

SHOAR desperately needs another political apparatchik as he faces re-election next year. It is estimated that SHOAR may raise as much as half a million dollars to be re-elected as Sheriff next year.

SHERIFF DAVID SHOAR’s Environmental Crimes unit never prosecuted HARRISS for his pollution crimes, but neither did anyone else.

Due to desuetude (nonenforcement) of environmental criminal laws under the Bush II administration, HARRISS was able to laugh at us every time we talked about his illegal dumping of solid waste (and the City’s emission of hundreds of thousands of gallons of raw sewage in our local rivers).

Twice the St. Johns River Water Management District informed WILLIAM B. HARRISS he could not dump in the Old City Reservoir without a permit -- once in-person at the site, once by certified mail. WILLIAM HARRISS dumped anyway.

Against the peace and dignity of the State of Florida, City Manager WILLIAM B. HARRISS ordered solid waste put in our Old City Reservoir – HARRIS wanted it brought back to Lincolnville so that he could call it a “park.”

From 2006-2008, City Manager WILLIAM B. HARRISS smirked time every concerned citizens spoke about his illegal dumping in the City Commission, never answering our questions and always affecting unconcern, insouciance and effrontery. HARRISS long enjoyed the support of a majority of prior St. Augustine City Commissions, and in 2006 Commissioners actually voted him an atta-boy plaque in the midst of a pending environmental crimes investigation, expressing their “confidence” in HARRISS< which could be construed as an overt act of obstruction of justice intended to signal City employees to shut up and not cooperate with pending criminal investigations.

HARRISS massively resisted FDEP’s orders to put the waste in a Class I landfill, instructing City lawyers never to agree to it, spending $200,000 on the AKERMAN $ENTERFITT law firm’s effort – HARRISS’ “massive resistance” to environmental laws showed disrespect for two African-American communities – the one where the waste was illegally dumped in the first place (where he wanted to return it) and the one where he had it illegally dumped in the Old City Reservoir.

WILLIAM B. HARRISS arrogantly condemned ACLU protesters on anti-artist and anti-entertainer ordinances, claiming they were trying to give the City a black eye. HARRISS gave the City two black eyes, a broken nose and put its foot in its mouth with his Philistinism.

HARRISS goaded Commissioners not to allow Rainbow flags on our Bridge of Lions for Gay Pride, resulting in a Federal Court Order requiring the City to fly them July 8-13, 2005. United States District Judge Henry Lee Adams found our City violated our First Amendment rights (once again).

HARRISS never once had a performance appraisal, encumbering the position from April 13, 1998 until June 30, 2010.

Double-dipping Republican that he is, WILLIAM B. HARRISS is receiving a pension from the City while working for the Sheriff’s office.

According to the City Clerk’s office, WILLIAM B. HARRISS receives a retirement check from the City of St. Augustine of $9,367.46 monthly ($112,409.52 per year). SHOAR’s fundraiser, MICHAEL GOLD, reports on his Historic City News website that HARRISS is a “certified law enforcement officer,” works part-time, does not receive a salary, but could be paid for special events.

Sheriff DAVID SHOAR and his publicist, Sgt. Charles Mulligan, are “mum” on HARRISS. They have not responded substantively to an E-mail requesting HARRISS’ job description, hire date and salary information. Two telephone calls to Mulligan have not been returned. It is now past 5 PM on Friday, August 5, 2011.

People are already saying that ST. JOHNS COUNTY SHERIFF DAVID SHOAR’s political patronage machine knows no shame: SHOAR hired WILLIAM B. HARRISS, one of the most shameful people ever to a hold public office in St. Johns County – as lugubrious a goober as ever made a chair squeak.

Pray that SHOAR and HARRISS will learn from their mistakes and start treating citizens with dignity, respect and consideration.

PRAY that HARRISS is not a bad influence on SHOAR (who scarcely needs any more of them).

United States Supreme Court Justice Louis Dembitz Brandeis put it best when he wrote that when "government becomes a lawbreaker," it promotes disrespect for the law, and anarchy. Expect more lawbreaking as long as DAVID SHOAR is Sheriff, assisted by WILLIAM B. HARRISS & Co.

Watch DAVID SHOAR and WILLIAM HARRISS. Be true to our American Founding Fathers, who wrote in our Declaration of Independence of the need to resist arbitrary power and oppression with “manly firmness!”
Posted by Ed Slavin at 5:04 PM

WILLIAM B. HARRISS and DAVID SHOAR are simple low brow bully traitors of the ideals of the American people. They are both petty con artists - posers who dress themselves publicly in the great ideals of American freedom, equality, opportunity, and Christian values, and then work behind the scenes to subvert those cherished ideals and values so as to enrich the elite corporate rich people that they really grovel for. WILLIAM B. HARRISS and DAVID SHOAR, with their corrupt, bully, grovel to the rich, unchristian evil behavior, stand as a sterling example in microcosm of the systemic and institutionalized corruption that has captured all of America and now threatens the livelihoods, freedom and opportunity of all of us.

In a truly just world, with a fair and honest court system, they and their elite corporate overlords who have hijacked and now own and control the City Of Saint Augustine, would be wearing striped prison suits as the result of a RICO prosecution for their long term - very transparent now - ‘pattern and practice’ of usurping, selectively enforcing, and outright gangster subversion of the ‘rule of law’ in order to: subvert the Constitution of the United States of America; eliminate FREE SPEECH; oppress and eliminate political opposition; confiscate, ban, and impound lawful newspapers; decimate, oppress, and marginalize distinct classes of citizens; engage in hate crimes by fomenting hate, fear and intentional divisiveness; control and fix markets and prices; control and fix wages, working conditions and benefits for working people; etc.

I repeat; WILLIAM B. HARRISS and DAVID SHOAR are simple low brow, bully, traitors of the ideals of the American people. They are both petty con artists and posers who belong in prison. That WILLIAM B. HARRISS walks free and extorts $9,367.46 monthly ($112,409.52 per year) from his resident taxpayer victims under the guise of a ‘retirement’ payment, and now double dips under the patronage of his crony in crime DAVID SHOAR is testimony to just how institutionalized our corruption has become.

“Pray that SHOAR and HARRISS will learn from their mistakes and start treating citizens with dignity, respect and consideration.”

And Mr. Slavin, you left out double dipping - also grossly overpaid -TEDDY BEAR JOE BOWEN who paints the gloss on these pigs, WILLIAM B. HARRISS and DAVID SHOAR, with his transparently deflective and disingenuous stuffed animal circus.