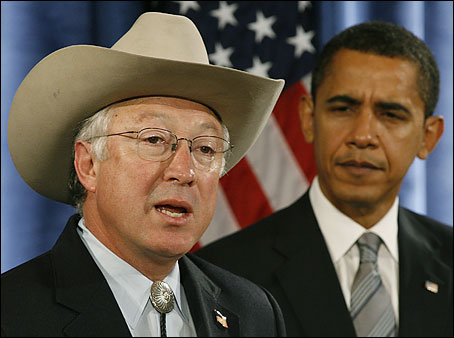 Secretary of the Interior Kenneth Salazar and President Barack Obama

Monday, July 18, 2011, was a great day in the history of making St. Augustine a better place. At Flagler College Auditorium, Secretary of the Interior Kenneth Salazar came very close to endorsing a St. Augustine National Historical Park and National Seashore Monday at the inaugural meeting of the St. Augustine 450th Commemoration Commission, enacted thanks to the efforts of U.S. Rep. John Mica and Senator Bill Nelson.

Secretary Salazar’s speech was ad lib – the Department of the Interior responded to me by E-mail yesterday that there was no prepared text.

The Department of the Interior will work “hand in hand” with St. Augustine to celebrate a “national event.” St. Augustine is a “very special place,” Secretary Salazar said. In fact, St. Augustine, Florida is “one of our Creator’s most special places.” We agree. That is the premise of the St. Augustine National Historical Park and National Seashore Act of 2011.

Secretary Salazar said the contributions of St. Augustine and Florida to our history need to be made “known to our Nation and are known to the world.” St. Augustine has “history that we carry in our hearts,” he said. We agree.

Secretary Salazar talked about how much he loves his job and how he gets to “celebrate Yosemite, Acadia and the Everglades” in his job (as opposed to the Transportation Secretary, Ray LaHood, who gets to celebrate roads and bridges)(.

Secretary Salazar talked about the inexorable link between outdoor recreation and tourism and growing the economy – “hopefully we’ll restore this economy to greatness” and “make it happen.”

“Never since the Great Depression has America lived in such an unsettled economy,” Salazar said.

Salazar talked about how important the Everglades are to tourism and the economy, noting it is a World Heritage site.

Could St. Augustine one day become a World Heritage site? Why not?

Salazar talked about how important is “the investment we make” in “one of the Creator’s most important places on this Earth.” He was referring to the Everglades, but in terms of history and the environment, he could easily have been referring to St. Augustine. Salazar said that the Everglades is “important to the economy of Florida – without it, the economy would wither.”

Salazar then praised St. Augustine …. a jewel that tells the story of the founding of America, first city in America,” which “created much of the blueprint of what we now know as America.” “The history of this place… is not very well known throughout the United States … that history is important to tell.”

Drawing affectionate and appreciative laughter from St. Augustine residents, Secretary Salazar told about how Director Eric P. Johnson of the Mission of Nombre de Dios and the Shrine of Our Lady of La Leche (the Catholic shrine) told him Sunday night about how young Eric Johnson corrected his teachers about Plymouth Rock and Jamestown when he was in school, telling them that they were not where America began.

Likewise, Secretary Salazar said, to gentle laughter, that he was among the tens of millions of Americans who were falsely given the impression their ancestors came over on the Mayflower. This was despite the fact that Salazar grew up in a Hispanic community some 265 miles South of Denver. In Salazar’s household, everyone spoke Spanish – his family has been in America for eight generations, and his ancestors helped found Santa Fe, New Mexico.

Secretary of the Interior Kenneth Salazar pointed the way toward a National Civil Rights Museum in St. Augustine said that, “We as a nation have been the beacon for the world in terms of the progress of humanity --- the arc of justice bends toward more perfect humanity, as Dr. King said – what is important for us is as we tell the story …”

Secretary Salazar talked about the strong, inextricable, irrefragable link between economics, tourism and outdoor recreation. He spoke of working with 450th Commission Chairman Jay Kislak and other members of the National Parks Foundation to promote outdoor recreation and economic growth.

Salazar said that St. Augustine presents “a very important mission for me as Secretary of the Interior.”

“As we struggle with the economic crisis of our time, we ought not to forget that we need to keep investing in the conservation agenda,” Salazar said.

Salazar said that prposed 22% cuts in the National Park Service budget set forth in the House of Representatives in Appropriations Committee bill would “set back our efforts significantly.”

Salazar asked everyone to support our National Parks and their “job creation agenda,” which is “so important to all America.”

Salazar said he was “here in St. Augustine in large part due to the efforts of your Mayor,” Joseph Boles, who “came to my office,” saying he “would not be here today” but for Mayor Boles’ “advocacy along with the local leadership here” and Senator Bill Nelson.

Salazar said he looked forward to “working here with you hand-in-hand, celebrating” the 450th anniversary of St. Augustine (2015) and the 500th

Anniversary of Spanish Florida (2013), saying it would be a “wonderful several years,” promising to “work on this agenda. “

Salazar reiterated how America is the “beacon of the world,” with its message of “freedom and democracy,” stating that the job of “telling the stories of America” and of “St. Augustine is incredibly, incredibly important.”

The Record barely reported what the Secretary of the Interior had to say.

Then the Record was mum, and also did not report the fact that, when public questions were allowed, the audience applauded the request to make a presentation to the 450th Commission about the proposed St. Augustine National Historical Park and National Seashore.