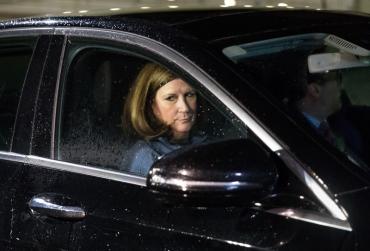 Susan Haynie Photo: The Palm Beach Post
Gov. Rick Scott wasted no time Friday suspending Boca Raton Mayor Susan Haynie, who faces criminal charges of official misconduct and corrupt misuse of her office.
Haynie, 62, turned herself in at the local jail Tuesday. She is charged with four felonies -- three counts of felony official misconduct and one count of perjury. She also is charged with three misdemeanors -- official misuse of office, corrupt misuse of official position and failure to disclose voting conflicts.
Said Scott's executive order, "It is in the best interests of the residents of the City of Boca Raton, and the citizens of the State of Florida, that Susan Ince Haynie be immediately suspended from the public office, which she now holds ...” See the governor's executive order here.
Less than half an hour later, Haynie's deputy Scott Singer was installed as mayor, as specified in the city charter.
The State Attorney’s Office began its investigation in March 2017 into complaints that Haynie voted on issues that could financially benefit developer James Batmasian while failing to disclose income she had received from him and his companies through a business Haynie owned with her husband.
Bank records subpoenaed by the State Attorney’s Office reveal $335,000 in earnings Haynie never reported on financial disclosure forms required by law. The arrest report cites these accounts over the last four years as belonging to Haynie and her husband, Neil:
Haynie's attorney, Leonard Feurer, claims Haynie is innocent and will be vindicated. Haynie herself declined to comment to the media Tuesday after she was freed on bond.
The suspended mayor is scheduled for an arraignment hearing on May 24 in Palm Beach County Circuit Court. She likely will announce formally then whether she plans to fight the charges.
Haynie’s arrest came as a shock to staff and other council members, who were in the middle of a City Council meeting when she turned herself in. City Manager Leif Ahnell said she had called in sick that day.
Pressure has been mounting since Tuesday for Haynie to resign, not just through newspaper editorials, but in City Council-member interviews.
“I believe the mayor should resign,” Council Member Monica Mayotte told the Sun Sentinel on Thursday, “The new charges illustrate years of reckless behavior. I believe she has demonstrated poor judgment in how she has handled herself over several years. She has completely betrayed the public’s trust.”
Haynie has been a fixture in Boca Raton politics, elected to office seven times in the past 17 years. Though she hasn't officially resigned as mayor, she has withdrawn her bid for Palm Beach County Commission.
Reach Nancy Smith at nsmith@sunshinestatenews.com or at 228-282-2423. Twitter: @NancyLBSmith
Posted by Ed Slavin at 5:12 PM