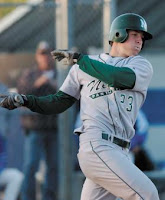 Stuart Korfhage column: Tebow still playing like he did when he belonged to St. Johns County

Before his name was a verb, before he took over nearly every discussion about pro football and before he crossed over from star athlete to celebrity, Tim Tebow was just a kid with a football in his hand.

How lucky we were that kid came of age right in front of our eyes in St. Johns County.

The Tebow phenomenon is absolutely out of control right now after the former Nease star led the Denver Broncos to an overtime victory over the Pittsburgh Steelers in the first round of the playoffs last week.

If Tebow somehow pushes the Broncos past the heavily favored New England Patriots on Saturday, the excitement might cause a Twitter meltdown. The company has reported that Tebow spawned 9,420 tweets per second during last week’s game.

And yet it’s almost impossible to be surprised.

Those of us who were at any of those Nease-St. Augustine games during the Tebow years understand. Even if you absolutely hated Nease, you couldn’t help but be wowed by Tebow.

And a crying Tebow obliged many of them.

It’s hard to have perspective about something while it is happening, but I think most of us knew what a special talent Tebow was even in high school.

There is absolutely nobody to compare him to in my experience as a sports writer or even a sports fan.

And if you spent five minutes around the guy, you realized he was truly the fun-loving, yet hard-charging athlete you saw on the field.

By the time Tebow was a junior, tales of his prowess had started to leak outside the county. A lot of people would show up at games to see if the reality lived up to the legend.

I used to love meeting people who got to see Tebow play for the first time. Anyone who didn’t walk away feeling amazed just wasn’t watching — or wasn’t being honest with himself.

People would sometimes look at me in surprise when Tebow would do the things Tebow does.

“He does this every week,” I would say.

That’s why I’ve never been surprised by the fame Tebow has achieved.

I know a lot of people are behind him because of the way he constantly puts his Christian faith on display.

But he’s not the first to do that. He’s just the first to be noticed by the whole world. The reason we keep paying attention to Tebow is that he’s still doing his job with the same flair, enthusiasm and abandon as he did when he was a high school kid breaking in his first razor.

Tebow plays football like it’s a game, not a war, not a dance contest.

He plays football the way you used to play with your brother in the backyard.

He plays the way he played when he was 16 and he was still all ours.