REALITY HELL I: READ ABOUT OSCEOLA CAPTURE SITE, WHICH MAY BE DUG UP BY LOOTERS (DIGGERS) FOR NATIONAL TV PROGRAM -- JUST SAY NO! 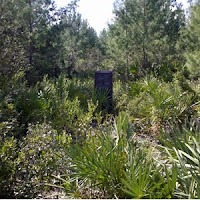 One of Seminoles' greatest leaders betrayed near Wildwood Drive

JENNIFER EDWARDS
Special to the Record

A quiet street in the peaceful Wildwood Creek neighborhood leads to a site that marks government betrayal, bloodshed and a fire that consumed a national landmark nearly 170 years ago.

On Oct. 26, 1837, federal troops from Fort Peyton captured one of the government's fiercest enemies in Florida, Seminole war leader Osceola.

For years, Osceola had bedeviled the government's attempts to remove Native Americans from the area. He was taken prisoner under a flag of truce and was imprisoned in the Castillo de San Marcos, where he died shortly afterward.

Fort Peyton, not far from the Wildwood Creek neighborhood, was one of several forts designed to protect St. Augustine during the Second Seminole Indian War. It burned down in 1840.

An unpaved trail now leads from Winterhawk Drive through the forest and ends at a freshly restored historical marker -- the only nod to the fort located here and the area's rich history. The path is unmarked and hard to find.

"Something very important happened there ...," Robin Moore, St. Johns County historic resources coordinator, said of the Fort Peyton site. "St. Augustine knew who Osceola was and people in Central Florida and other places knew who he was ..."

But until this year, not even the marker could bear witness to the life and eventual betrayal of one of the most well-known Indian leaders of the era.

"There was a bunch of bullet holes around the sign and the post was all shot up," explained Kevin Spilling, 17, a Pedro Menendez High School senior and Eagle Scout who organized a project to restore the marker and dress up the site.

In addition to restoring a marker that describes the history of Fort Peyton and mentions Osceola's capture, volunteers from Spilling's troop also mulched the area, added wooden benches and created a planter around another marker.

That marker, a coquina monument erected in 1916, also commemorated Osceola's capture at a nearby site but has long since lost the plate describing that capture.

Spilling, who lives near the markers, said he organized the restoration because when he was growing up, "I wished it was more built up and people had a place to go back there and eat lunch, sit and talk instead of it being all overgrown with weeds."

The actual spot of the Seminole war leader's capture is even more overgrown. According to local tradition, it is located about a mile south of the Fort Peyton site where a trail leads through nearly a third of a mile of underbrush and to another faceless coquina marker. That marker is nearly hidden by palmetto fronds.

But that site may get new life, too, Moore said.

Moore said the marker may be replaced soon as part of an agreement with a potential subdivision developer, and he said St. Johns County also is looking to develop the area around the Fort Peyton marker.

"We've targeted special spots like that for educational development," he said, noting that the area could become part of an interpretive trail.

"You could learn the history of the Seminole war and the activities that went on on the land you are walking," he said.

What the marker says

"Fort Peyton, established by Maj. Gen. Thomas S. Jesup in August 1837 and garrisoned by regular army troops, was one of a chain of military outposts created during the Second Seminole Indian War for the protection of the St. Augustine area.

It consisted of four log houses, built on a hollow square, two occupied by the troops, one by officers and the fourth used as a hospital commissary.

This post was first known as Fort Moultrie, but its name was changed in honor of Lt. Richard H. Peyton, post commander in 1832. The Seminole Indian chief*, Osceola, was captured about a mile south of this site.

Fort Peyton was ordered abandoned by the secretary of war, Joel R. Poinsett, in May 1840. The buildings burned to the ground on February 14, 1842, presumably set afire by an incendiary."

*Note: Osceola was not a chief.

Osceola was born Billy Powell, and of mixed ancestry. He was the son of William Powell, a white trader in the Tallassee, Ala., area and a Native American woman named Polly Copinger.

His name later became Osceola, and was taken from "asi," a black drink and "yahola," or singer.

He was an important war leader, but was never the chief of an Indian tribe.