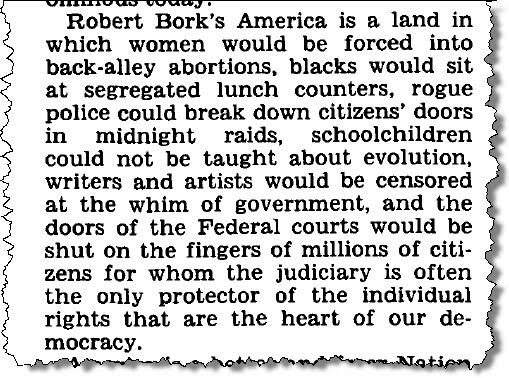 Check it out -- sexist ex-JUDGE ROBERT HERON BORK, who was rejected by the U.S. Senate 58-42 for a seat on the Supreme Court, says that women aren't being discriminated against and don't deserve protection under the Fourteenth Amendment Equal Protection Clauser. Click link above.

JUDGE BORK is one of MITT ROMNEY's legal advisers. In 1987, my first boss, Ted Kennedy, took to the Senate Floor upon ROBERT BORK's nomination to the Supreme Court by President RONALD WILSON REAGAN. Senator Kennedy said:

Mr. President, I oppose the nomination of Robert Bork to the Supreme Court, and I urge the Senate to reject it.

In the Watergate scandal of 1973, two distinguished Republicans — Attorney General Elliot Richardson and Deputy Attorney General William Ruckelshaus — put integrity and the Constitution ahead of loyalty to a corrupt President. They refused to do Richard Nixon's dirty work, and they refused to obey his order to fire Special Prosecutor Archibald Cox. The deed devolved on Solicitor General Robert Bork, who executed the unconscionable assignment that has become one of the darkest chapters for the rule of law in American history.

That act — later ruled illegal by a Federal court  — is sufficient, by itself, to disqualify Mr. Bork from this new position to which he has been nominated. The man who fired Archibald Cox does not deserve to sit on the Supreme Court of the United States.

Mr. Bork should also be rejected by the Senate because he stands for an extremist view of the Constitution and the role of the Supreme Court that would have placed him outside the mainstream of American constitutional jurisprudence in the 1960s, let alone the 1980s. He opposed the Public Accommodations Civil Rights Act of 1964. He opposed the one-man one-vote decision of the Supreme Court the same year. He has said that the First Amendment applies only to political speech, not literature or works of art or scientific expression.

Under the twin pressures of academic rejection and the prospect of Senate rejection, Mr. Bork subsequently retracted the most neanderthal of these views on civil rights and the first amendment. But his mind-set is no less ominous today.

Robert Bork's America is a land in which women would be forced into back-alley abortions, blacks would sit at segregated lunch counters, rogue police could break down citizens' doors in midnight raids, schoolchildren could not be taught about evolution, writers and artists would be censored at the whim of government, and the doors of the federal courts would be shut on the fingers of millions of citizens for whom the judiciary is often the only protector of the individual rights that are the heart of our democracy.

America is a better and freer nation than Robert Bork thinks. Yet in the current delicate balance of the Supreme Court, his rigid ideology will tip the scales of justice against the kind of country America is and ought to be.

The damage that President Reagan will do through this nomination, if it is not rejected by the Senate, could live on far beyond the end of his presidential term. President Reagan is still our President. But he should not be able to reach out from the muck of Irangate, reach into the muck of Watergate, and impose his reactionary vision of the Constitution on the Supreme Court and on the next generation of Americans. No justice would be better than this injustice.

Mr. President, I ask unanimous consent that a statement by Benjamin L. Hooks and Ralph G. Neas of the Leadership Conference on Civil Rights opposing the nomination may be printed in the Record.

There being no objection, the statement was ordered to be printed in the Record, as follows:

There is no question that a very substantial majority of the civil rights community will strongly oppose the nomination of Robert Bork to be Associate Justice of the United States Supreme Court.

The confirmation of Robert Bork, an ultra-conservative, would dramatically alter the balance of the Supreme Court, putting in jeopardy the civil rights achievements of the past three decades. Well established law could overnight be substantially eroded or overturned.

This is the most historic moment of the Reagan presidency. Senators will never cast a more important and far-reaching vote. Indeed, this decision will profoundly influence the law of the land well into the 21st century.