Yesterday, protesters greeted PUBLIX’s new Vilano Beach store with eight hours of protests, starting at 8 AM and ending after 4 PM.
The Coalition of Immokalee Workers (CIW),joined by Occupy St. Augustine, International Workers of the World (IWW) and local faith-based activists, held informational picketing on the sidewalk in front of the PUBLIX at the Vilano Beach Town Center.
Sadly, PUBLIX refuses to join other large organizations, including grocery and fast food chains and the Florida Tomato Growers Exchange, in paying one cent more per pound of tomatoes to assure farmworkers a living wage.
PUBLIX customers and employees, with few exceptions, were friendly and courteous. PUBLIX management refused to discuss the issue, refused to accept correspondence and refused to discuss the issues with the CIW. They also refused to accept a jar of pennies offered to help defray the additional penny a pound it would take to pay farmworkers a living wage.
In talking with people, we emphasized that PUBLIX is a good store, and this is our only beef with public.
We got supportive words and gestures from PUBLIX customers.
I observed only a few soreheads (less than ten). Two were one-percenters who actually yelled at us to “get a job.” Another said, “shame on you.” And four said, “Get a life.”
We’re hoping that, when PUBLIX agrees to pay one cent more for pound of tomatoes, that Florida’s farmworkers will “get a life.” Back-breaking stoop labor for piecework is contrary to the genius of a free people – it is immoral for PUBLIX not to agree to pay farmworkers a living wage.
When someone in a military-style assault SUV screams and yells and tells farmworker rights activists to “get a life,” I am wondering what they had in mind? “Get a life” is a cliché, an idiomatic American English free of content, used by four “idiots” (that was the term in ancient Athens term for people who disdained involvement in politics).
The American Heritage Slang Dictionary says “Get a life” means to “Acquire some interests or relationships of one's own. For example, Stop sitting around and complaining—get a life.” [Slang; late 1900s].
None of us were sitting around and complaining – this is our country, and our views will be heard and heeded. Farmworker rights will be respected and not neglected. It is up to us.
Robert Kennedy said in 1966: "It is not enough to allow dissent. We must demand it. For there is much to dissent from. .... We dissent from the fact that millions are trapped in poverty while the nation grows rich. ... We dissent from the conditions and hatreds which deny a full life to our fellow citizens because of the color of their skin. ... We dissent from the monstrous absurdity of a world where nations stand poised to destroy one another, and men must kill their fellow men. ... We dissent from the sight of most of mankind living in poverty, stricken by disease, threatened by hunger and doomed to an early death after a life of unremitting labor. ... We dissent from cities which blunt our senses and turn the ordinary acts of daily life into a painful struggle. ... We dissent from the willful, heedless destruction of natural pleasure and beauty. ... We dissent from all these structures – of technology and of society itself – which strip from the individual the dignity and warmth of sharing in the common tasks of his community and his country."
We’re Americans – and we take care of our own. We don’t leave people behind. We don’t turn our backs on human suffering. We fought a war that ended slavery. We defend farmworkers from slavery. We indict farmers that subject farmworkers to slavery. We don’t tolerate soulless mega-corporations that exploit farmworkers. That’s what distinguishes Real Americans from the people Teddy Roosevlt referred to as “those timid souls” – self-aggrandizing narcissists who have never stood up for anyone’s rights, and don’t give a fig about the Constitution and the Bill of Rights.
Obviously, those four crabby PUBLIX customers who yelled “Get a life” wish us to have crabbed lives like theirs -- materialistic lives that care not a fig for other people's misery.
Authoritarians, they wish to tell us what to say and what to think, and not to care for our fellow man and woman. Assumedly, they are dull Republicans who know not that they know not that they know not – cognitive misers who are part of ROBERT BORK’s AMERICA.
ROBERT BORK is WILLARD MITT ROMNEY’s top legal advisor. My first boss, the late Senator Ted Kennedy, once said, “Robert Bork's America is a land in which women would be forced into back-alley abortions, blacks would sit at segregated lunch counters, rogue police could break down citizens' doors in midnight raids, schoolchildren could not be taught about evolution, writers and artists would be censored at the whim of government, and the doors of the federal courts would be shut on the fingers of millions of citizens for whom the judiciary is often the only protector of the individual rights that are the heart of our democracy."
We’re excited by the positive reactions at PUBLIX’ Vilano Beach store yesterday between 8 AM and 4 PM. As FDR once said, after appearing at Franklin Field in Philadelphia in 1944 (my mother was there),” I felt the crowd, and it warmed me.”
As Arnold Schwartzenegger once said, “We’ll be back!”

Here are photos from other CIW protests at other PUBLIX stores, including photos of Stetson Kennedy picketing, and links to Edward R. Murrow's 1960 CBS documentary, Harvest of Shame (especially for the "lady" who screamed, "Shame on you!": 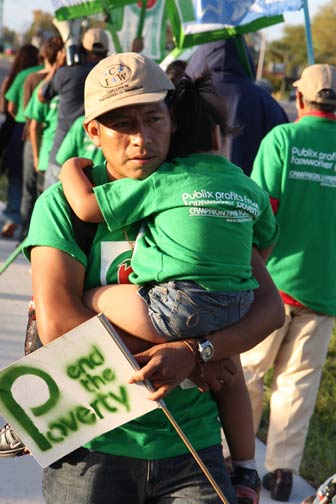 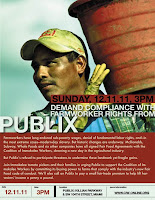 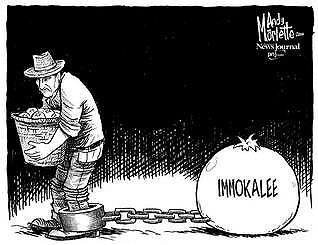 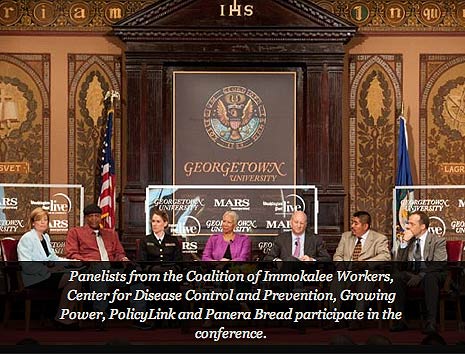 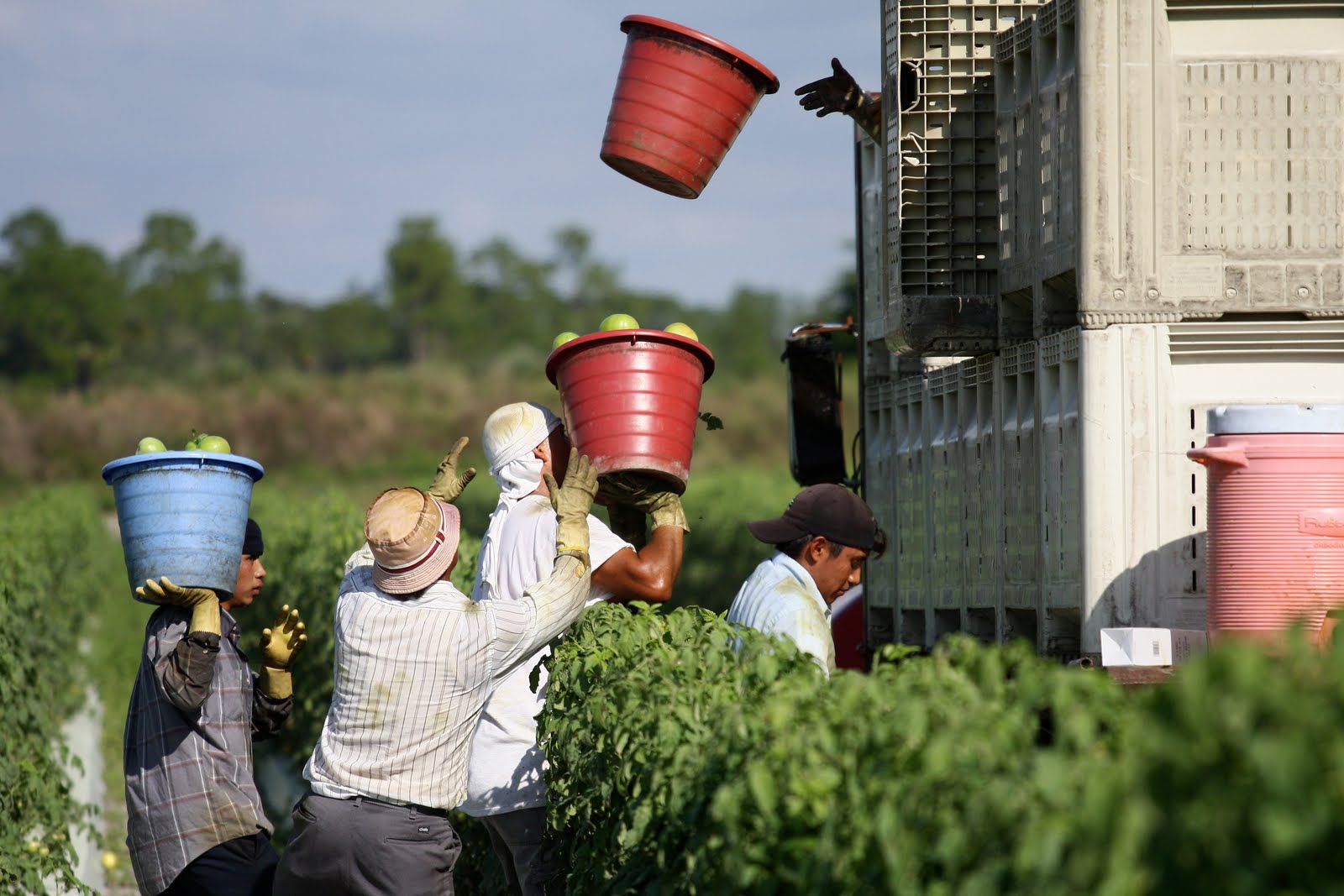 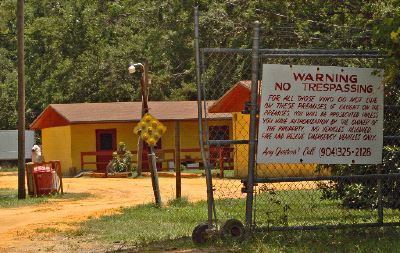 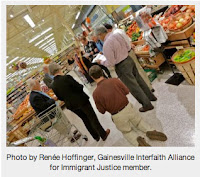 PUBLIX is a fine store, and a well-run company. My only beef with PUBLIX -- shared by my mentor, the late KKK-buster Stetson Kennedy -- is that PUBLIX won't agree to pay an additional penny per pound of tomatoes to see that farmworkers are paid a living wage. Other large companies -- including Taco Bell (Yum! Brands) have agreed to the reasonable proposal.

Before he died, earlier this year, Stetson Kennedy was picketing and boycotting PUBLIX.