St. Augustine Mayor Joseph L. Boles, Jr. last night raised a trial balloon, proposing that both Charlotte Street and Spanish Street be made pedestrian-only, at least during certain times of the day.  The discussion came toward the end of the City Commission meeting, amid a discussion of the recently sunset Parking and Traffic Committee.

Spanish Street and Charlotte Streets are part of the Historic District in our Nation's Oldest European-founded City.

What a great idea!

St. George Street was made pedestrian-only when Kenneth Beeson was Mayor.  Adding Charlotte and Spanish Streets to the list of pedestrian-only streets will make our town a better place to live.  It will increase Heritage Tourism, encouraging more historic and environmental tourists to visit -- they spend twice as long and twice as much as other tourists, according to the 2004 report of the National Trust for Historic Preservation.  It will help create jobs, grow our economy, and help pave the way for the St. Augustine National Historical Park and National Seashore.

Kudos to Mayor Boles.
Posted by Ed Slavin at 4:59 PM No comments:

City decides both Wiles and Hayling will be honored

By STUART KORFHAGE
stuart.korfhage@staugustine.com
2 recipients for La Florida Award
In a decision that was anything but unanimous, the St. Augustine City Commission decided Monday night that two men will receive the La Florida Award.
While all five commissioners were in agreement that Herbert L. “Herbie” Wiles and Dr. Robert B. Hayling were worthy of recognition, there was fiery debate on the issue of them both being recipients this year.
The normal protocol is for the La Florida Award to be shared by no more than eight living members at any time. And each recipient must be voted in unanimously.
However, two commissioners brought nominations forward, making it impossible for either Wiles or Hayling to get unanimous choices.
That left the commission with the option of changing the rules in some way or having no immediate replacement for the late Jerry Kass.
What to do about the impasse resulted in debate.
Commissioner Leanna Freeman and Vice Mayor Nancy Sikes-Kline were the most vocal for each respective side.
Sikes-Kline, who nominated Hayling, first introduced the plan of expanding the award to 10 living recipients.
“Changing the number is the expedient way to honor both of these honorable men,” Commissioner Bill Leary said.
Commissioner Roxanne Horvath recommended that the number be altered to nine, which seemed to mollify Sikes-Kline and Leary. Leary had nominated Wiles.
Freeman didn’t like either expansion. She also found it unnecessary because Hayling had already been honored with the de Aviles Award and hasn’t lived here for almost five decades.
“I absolutely don’t support changing it,” Freeman said. “My feeling is we should have a moratorium on this now.”
Freeman said it was the commission’s job to make difficult decisions rather than just change the rules when it suited them. She said there was nothing wrong with the La Florida Award slot being vacant until a choice was made.
“You’re changing the rules for political convenience,” Freeman said.
Sikes-Kline countered: “That is cynical.”
Freeman asked the commission if she had brought forth a nomination of her own, would they further expand the award.
Her objections were not shared by the rest of the commission, however.
After adopting a resolution that would allow for the expansion of La Florida Award recipients to nine living members and that their selection be based on a simple majority, the commission voted to allow both Wiles and Hayling to receive the award.
Voting for Wiles was unanimous, but Freeman voted against Hayling because of the objections she had already voiced about the awards changes.
Mayor Joe Boles said the entire process of choosing the La Florida Award was flawed and suggested a moratorium on future awards until the commission can come up with a more appropriate system.
“We made this problem ourselves; we’ll fix it ourselves,” he said.
Boles also stressed to the public that the commission’s bickering over the award process should not tarnish the honor for Hayling and Wiles.
“We are delighted they will be La Florida Award winners,” he said.
Prior to the actual vote, Leary gave an emotional account of his decision to nominate Wiles for the award. Leary said he’d had a long conversation with Kass not long before he died. He said it inspired him to find someone worthy to replace Kass as a La Florida Award winner.
And to prove just how gracious Wiles is, Leary said, the longtime philanthropist even asked to be withdrawn from consideration if it was going to cause a fight.
Instead, a compromise was struck, and Wiles and Hayling can both enjoy the city’s highest honor.
“He (Wiles) is everything this award was intended to be,” Leary said. 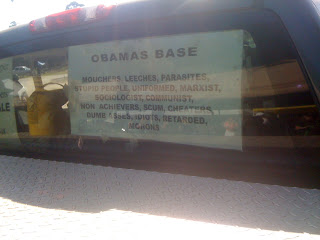 It's another beautiful day in a beautiful place, and St. Augustine Civil Rights Movement leader Dr. Robert Hayling, D.D.S., is up for consideration for the La Florida award by the City of St. Augustine tonight.  President Barack Obama has been re-elected and re-inaugurated.  In the most eloquent Inaugural Address in decades, a week ago, President Obama spoke out for environmental protection, action on Climate Change and safeguarding the rights of our "Gay and Lesbian brothers and sisters."   On December 10th, our City of St. Augustine amended its Fair Housing Ordinance to protect GLBT people, rejecting lies from hate-preachers (arguments that won the day in Jacksonville City Council back in August). (The City of St. Augustine Beach passed a similar ordinance on first reading  and will finalize it next month.)

The Koch Brothers and their ilk spent billions trying to pervert our democracy.  They lost. Meanwhile, a few Fox and Koch misled soreheads cast aspersions (or asparagus).  Count their misspellings, illogic and pejoratives (as on a datil pepper vendor's uninformed and supercilious sign, above, stating inter alia "MOUCHERS," "UNIFORMED" and "SOCIOLOGIST").

The Ku Klux Klan (KKK) and the John Birch Society once ran St. Augustine and rioted here, in our lifetimes, railing against equality, throwing bricks, with "Don't Tread on Me" signs brandished by KKK members in the Slave Market.

Today their ilk doesn't even get party invitations here any longer, much to their chagrin.  A local hate site laments the coming of the "Picasso Art and Arena" exhibit at our Visitor Information Center, ululating about not being invited to an art opening party).

There's still much work to be done to make our town a better place. Our federal 450th Commission is moribund, and needs to get to work on legacy projects, like the St. Augustine National Historical Park and National Seashore.  www.staugustgreen.com

And down on St. George Street, it is still illegal to sing, paint, draw or entertain -- holdover "Jim Crow" law from a prior City Manager.  Yet, despite the arrests of people for signing and painting, a small group of  pestiferous hate group members routinely infest our sidewalks with threatening, provocative signs about gun control and with hate-Obama signs (one says "Obama is a Communist" and another says "Obama is 666.").  We wear the hater's scorn as a badge of honor.   They belong to history's ashbins.  How 1964 of them!  (These are the same misguided people who oppose the St. Augustine National Historical Park and National Seashore, calling supporters "Communists and Nazis," comparing us to "Hitler, Goebbels and Stalin," opposed equality for all in St. Augustine's Fair Housing ordinance -- while worshiping weapons of mass destruction, which have killed so many Americans).

Their pestilential presence has First Amendment benefits for all of us, and for our future as a City.

St. George Street is now a First Amendment Forum again, thanks to the Tea Party's continuing presence -- it cannot be denied to artists, musicians and entertainers any longer.  City policemen sit and watch the Tea Party's hateful behavior and allow it -- therefore, the City cannot enforce its Philistine anti-music, anti-art and anti-busker ordinances any longer.

Tonight's City Commission meeting will address vendors, but it needs to address more -- public rights to Free Speech, nondiscrimination and Equal Protection -- starting with amending our City of St. Augustine Ordinance 1-08 and ending illegal artist, musician and entertainer arrests.  We want our buskers back.  The First Amendment and human decency compel that result.


What do you reckon?

Photo credits: Ed Slavin (above); St. Augustine Record (two below); and Examiner (last one below).

IN HAEC VERBA: SALE OF CURRENT MEDIA LLC TO Al-JAZEERA SHOULD BE STOPPED IN THE PUBLIC INTEREST -- NO FOREIGN GOVERNMENT CONTROL OF U.S. NEWS NETWORKS, PLEASE

To the Current TV Press Office
Good morning:
1. What FCC, SEC or other regulatory approval is required for the sale of Current TV to Al- Jazeera?
2. May I please have Al Gore's E-mail address, or will you please forward this E-mail to him?
3. I testified before then Rep. Al Gore's House Science and Technology Committee investigations subcommittee on July 11, 1983 re: Oak Ridge Y-12 Nuclear Weapons Plant mercury pollution (biggest mercury pollution event in world history, which was a classified national security secret made public after our Appalachian Observer newspaper requested that DOE declassify its documents on pollution).  At my request to Al's staffer (Steve Owens),  Al swore in all the witnesses: that was the first time that had ever occurred in the history of the U.S. nuclear weapons complex.   Thirty years of environmental cleanups followed in eleven states with DOE sites, at a cost of more than $200 billion, with completion projected by 2043 -- sixty (60) years after our FOIA requests and Al Gore's hearing first exposed pandemic pollution by our Nation's nuclear weapons plant contractors.  I was proud to be a part of it ab initio and to have been the "crowbar" (in the words of then-DOE Oak Ridge Manager Joe Ben LaGrone) -- the "crowbar" who persuaded DOE to release the truth about Oak Ridge mercury pollution.
4. Thus, Al Gore is one of my heroes.  Al Gore is a national treasure.  But I think the proposed Al= Jazeera sale is a big mistake and I would like to share my views with Al Gore directly.  Elihu Root said the best advice one can often give the officers of a corporation is "You're damned fools and you should stop."  Please stop this Al-Jazeera deal now.
5. Qatar is a foreign power -- do we want U.S. journalistic properties being bought up by foreign governments and organizations that they fund or control, directly or indirectly?  I vote no.  Chinese and Russian government-funded news channels are looking for U.S. cable TV homes. I vote no.
6. Enough mindless corporate media greed has been seen in my lifetime -- please don't sell out!
7. Will you please ask Al Gore whether he has an open mind on the subject of foreign governmental control of our media?  Upon agonizing re-appraisal, does Al Gore believe this Al-Jazeera deal is in the best interests of the people of the United States of America?  Thank you.
With kindest regards, I am,
Sincerely yours,
Ed
Ed Slavin www.cleanupcityofstaugustine.blogspot.com www.staugustgreen.com
Box 3084
St. Augustine, Florida 32085-3084 904-377-4998
Posted by Ed Slavin at 1:13 PM No comments:

St. Augustine activist Jennie Hamilton Skillman was the kind of person who makes this a great place.  I first met  her on successive Saturdays in 2005, picketing with J. Ken Bryan (later a County Commissioner) the ASHLAND/APAC asphalt plant on SR 207, a plant that in 1998 St. Johns County's inept government allowed to be located in a residential neighborhood.
It takes a village.   Ms. Skillman helped to make this a better place.
My deep empathy and condolences to Ms. Skillman's son, Aubrey, and to her entire family.
Posted by Ed Slavin at 4:23 PM No comments: