Opinion Want to know what a ‘banana republic’ looks like? (WaPo)

The Rule of Law means " Equal Justice Under Law" -- it's cared in maerble in the front of the United States Supreme Court building.

Nervous pundits warn that for the good of the country, the Justice Department ought not to indict Donald Trump, since prosecuting a former president is the sort of thing “banana republics” do. That’s wrong on two grounds.

First, it is not up to Attorney General Merrick Garland to decide what’s in the country’s long-term democratic interests. The decision to “spare the country” of the turmoil surrounding a past president’s criminal trial rests with the chief executive, as was the case under President Gerald Ford.

The closest the Justice Department’s prosecutorial guidelines come to that concept is the requirement that a prosecution serve a “substantial federal interest.” But that factor, as properly understood, weighs in favor of prosecution. As the guidelines note:

In determining whether a substantial federal interest exists that requires prosecution, the attorney for the government should consider the nature and seriousness of the offense involved. A number of factors may be relevant to this consideration. One factor that is obviously of primary importance is the actual or potential impact of the offense on the community and on the victim(s). The nature and seriousness of the offense may also include a consideration of national security interests.

Well, there could hardly be a more substantial interest than punishing the leader of an attempt to overthrow a democratic election to deter future coups.

Fortunately, Garland made clear in a recent interview with NBC News’s Lester Holt that his department intends to “hold everyone, anyone who was criminally responsible for the events surrounding January 6, for any attempt to interfere with the lawful transfer of power from one administration to another, accountable.” The attorney general seemed to reject the idea of excluding a prosecution simply because Trump was president.

Second, prosecuting a former political leader is not what will turn the United States into a “banana republic.” Indeed, I have some unfortunate news for the nervous Nellies: Our country is already on its way to becoming a failed democracy. The question is now what we intend to do about it.H wow do you know democracy is unraveling?

It is when the incumbent does these sort of things:

By now, Americans should realize that this was the stuff of tin-pot dictatorships, not mature constitutional democracies. They should understand that the Republican Party, filled with small individuals hiding behind phony claims of privilege to avoid testifying, has become the bullying apparatus that dictators have historically used to amplify their lies and cloak their actions in legitimacy.

If Americans don’t want our presidents to resemble the thugs of South American or Eastern Europe and don’t want violence to become a standard political weapon, they should demand that Garland keep his word.

This is not the call to “lock him up.” This is the call of a citizenry demanding that the Justice Department follow the legal process to hold responsible anyone involved in arguably the worst crime against democracy in our history. Only a “banana republic” would give the guy behind the coup attempt a get-out-of-jail card.

Opinion by Jennifer Rubin
Jennifer Rubin writes reported opinion for The Washington Post. She is the author of “Resistance: How Women Saved Democracy from Donald Trump.”  Twitter
Posted by Ed Slavin at 11:17 AM 1 comment:

I would be honored to have your vote on November 8, 2022 for the position of Commissioner of the Anastasia Mosquito District of St. Johns County, Seat 2.

Here's my Q&A with the League of Women Voters:

What motivated you to run for office?

It's our money. I've been a watchdog on mosquito control since 2006. Mosquitoes could bring us the next global pandemic. We are prepared with data, research, education, and environmentally-friendly, non-toxic natural pesticides. As an 82nd Airborne Division paratrooper, my dad was infected with malaria in Sicily. Dad recovered in Army hospitals, but we saw dad suffer lifetime effects. LWV's Ms. Robin Nadeau asked me to help her investigate Anastasia Mosquito Control of St. Johns County, buying a $1.8 million no-bid, luxury Bell Jet Long Ranger helicopter incapable of killing a single skeeter, not unlike buying a Porsche to use with a snowplow. We persuaded AMCD to cancel illegal no-bid helicopter contract, saving $1.8 million in 2007.  What do you see as the most pressing issues for this office and how do you propose to address them?Advancing research and education while protecting scientific integrity and employee whistleblower rights; safeguarding the independence of AMCD, an independent scientific and technical organization; protecting public health, the environment and public funds. Let's assure that "whistleblower" ethical employees are heard and heeded whenever they raise concerns. Let's resist any further effort by the St. Johns County Board of County Commissioners to take over independent AMCD, as was attempted under former SJC County Administrator Michael Wanchick and County Commission Chairmen. I oppose allowing arbitration clauses in AMCD contracts, Yes, I've been a watchdog of mosquito control environmental protection and spending since December 2006.What training, experience, and characteristics qualify you for this position?Helped persuade our independent mosquito district to cancel unwise, no-bid luxury $1.8 million helicopter contract. Won declassification of our frail planet's largest-ever mercury pollution event (Oak Ridge, Tenn. Y-12 Nuclear Weapons Plant),triggering nationwide cleanups; recommended for Pulitzer Prize by DA. Clerked for USDOL Chief Administrative Law Judge Nahum Litt and Judge Charles Rippey. Staffer for Senators Ted Kennedy, Gary Hart & Jim Sasser. B.S.F.S., Georgetown U.; J.D., Memphis State U. Your watchdog, termed an "environmental hero" by FOLIO WEEKLY (after reporting City's illegal dumping of landfill in lake and illegal sewage effluent pollution of our saltwater marsh). Shall we ask questions, demand answers & expect democracy?How important are environmental concerns when making decisions for the Anastasia Mosquito Control District?Very importantExplain your answer.Rachel Carson's "Silent Spring" informs good science and use of non-toxic natural pesticides as much as possible. Amid global climate change, the next pandemic could be a mosquito-borne disease. Let's protect AMCD independence, education and applied research to protect public health and our environment. I support AMCD's leadership on natural pesticides. I once reported FEMA and AMCD to federal environmental law officials when bald eagles were exposed to organophosphate pesticides. Support AMCD working with other mosquito control districts and officials to share scientific knowledge to protect all of us "non-target species": mosquito control workers, residents, tourists, pets, horses, livestock, bees and other pollinators, flora and fauna. St. Johns County is growing rapidly. How does this impact the management of mosquito control?Overdevelopment increases the expense of mosquito control and increases exposure of families to mosquitoes from wetlands. St. Johns County Commissioners, developers and their big money clout decide way too many unwise development decisions. This requires our nimble small mosquito control special taxing district to innovate, with sensitive adaptation of mosquito control techniques to protect entire new neighborhoods, which seem to spring up overnight, adjoining wetlands. Public education, applied research, sound science-based policies and non-toxic mosquito control methods, are all essential to protecting public health from mosquito-borne diseases. AMCD exists to prevent any outbreaks of deadly mosquito-borne diseases. We must do it right! 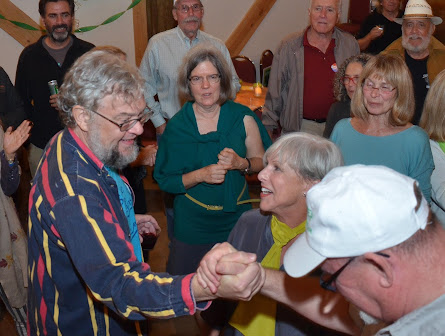 So delighted that Senators Manchin and Schumer resolved differences and found a compromise, the essence of our democratic republic.  The late Senagtor Robert C. Byrd would be proud.
From The Washington Post:
Comment
0

The news hit like a thunderclap this week. Joe Manchin is … a Democrat?

What terrible thing had Manchin done to deserve such howls of betrayal from Republicans? Well, it seems Manchin, the Republicans’ formerly favorite Democrat, had dared to act like a Democrat.

Manchin agreed with Senate Majority Leader Chuck Schumer (D-N.Y.) on legislation lowering prescription drug prices and providing renewable energy incentives, paid for by cracking down on large, tax-dodging corporations. After two years of Manchin’s resistance to such a deal, Republicans had come to believe he would never agree (though he never said as much). So when he did, they lashed out with self-destructive rage.

Forty-one Senate Republicans blocked a bill that would help veterans who had been exposed to toxic burn pits — even though 25 of the 41 had previously supported a nearly identical bill. In the House, GOP leaders fought to defeat a bipartisan agreement helping U.S. makers of semiconductor chips compete against China, getting all but 24 House Republicans to vote against the bill. Now, Senate Republicans are sayingthat because of pique over Manchin’s actions, a bipartisan effort to codify marriage equality might be doomed.

The episode is a key reminder that the supposed “polarization” in American politics is not symmetrical. Democrats, after a long struggle, are finally making a bid to hold the political center. They’ve reached near universal agreement on a bill that pays down debt, makes medicine cheaper, eliminates unfair tax breaks for the biggest corporations and the richest one-tenth of 1 percent, and implements an all-of-the-above energy policy that streamlines drilling permits while accelerating the switch to clean energy. And Republicans responded by voting against veterans and U.S. manufacturing.

Manchin, no partisan, scolded Republicans for “basically holding the veterans hostage because they’re mad.” He added: “My Republicans friends … get wrapped up in thinking ‘Well, we’ve got to be against something because it might make the other side look good.’ ”

The West Virginia senator has been a huge irritant to his fellow Democrats (he says he’s been “ostracized” and “victimized”), but he is at core an old-school populist. Democrats were tempted to drum him out of the party over his refusal to abolish the filibuster, which stymied President Biden’s agenda. But there have been considerable benefits in maintaining some semblance of a big tent.

Manchin backed Democrats’ coronavirus relief bill, was a key figure in negotiating the bipartisan infrastructure bill, attempted (but failed) to win Republican support for a voting rights package, helped to enact bipartisan gun safety legislation, and is on the cusp of securing bipartisan passage of Electoral Count Act reform to avoid a recurrence of Jan. 6. And now he has shocked everybody with his support for the clean energy and prescription drug package.

Selling his agreement to his constituents in Trump country during an interview on Thursday with West Virginia’s MetroNews, Manchin struck a populist note worthy of Sens. Elizabeth Warren (D-Mass.) or Bernie Sanders (I-Vt.). Manchin called it “ridiculous” to say the bill is a tax hike. “There were some very, very large corporations that could basically take advantage of the tax code and pay nothing. I didn’t think that was fair, and I think most Americans don’t think that’s fair,” Manchin said. “They are paying for the ability to be in this country, with the defense we have, the protections we have, and the opportunities. And they don’t want to participate? I want them to come forward. Tell me who you are.”

Asked to respond to Senate Republican leader Mitch McConnell’s claim that the Manchin bill amounts to “giant tax hikes” that will “kill many thousands of American jobs,” Manchin replied: “That’s just a shame.” Manchin said he worked with Republicans in the past on similar energy bills, “and now you’ve got a chance to get it and you’re going to boo-hoo it?” The longtime broker of bipartisan deals said of Republicans: “This is a bill we would have worked on in a bipartisan effort if we could’ve, but they can’t.”

Or, more accurately, they won’t.

Manchin, no doubt, has given his fellow Democrats fits for two years. But in one sense, he is very much one of them: He still wants to get things done. In the current American political system, only one side is even trying.

Opinion by Dana Milbank
Dana Milbank is an opinion columnist for The Washington Post. He sketches the foolish, the fallacious and the felonious in politics. His book “The Destructionists: The 25-Year Crackup of the Republican Party” (Doubleday) is out in August.  Twitter
Posted by Ed Slavin at 5:38 PM No comments: