By —
Travis Daub
Travis Daub is Digital Director at PBS NewsHour where he manages the incredible digital content team and oversees the integration of online and on-air content. With 20 years of experience in online publishing, Travis has been honored to work alongside talented colleagues at the PBS NewsHour, Foreign Policy magazine and the Des Moines Register.
@tcd004 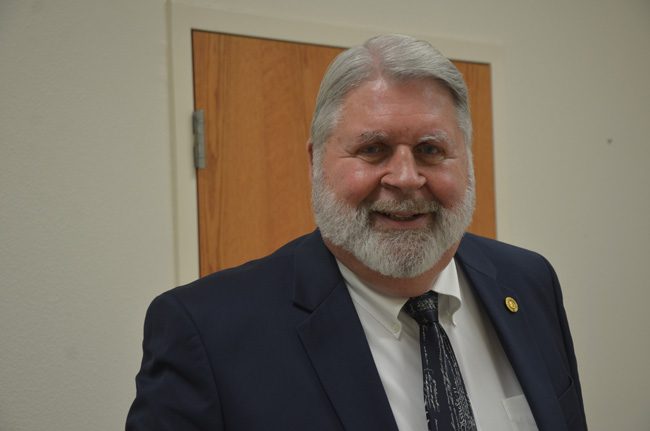 Jerry Cameron at the end of one of his interviews with a county commissioner this morning. Hours later, the commission voted to select him interim manager. (c FlaglerLive)
Flagler County commissioners took little time in a special meeting this afternoon to select Jerry Cameron their interim administrator for the next half year or more. The vote was unanimous. Cameron replaces Craig Coffey, whom the commission forced to resign last month, and is expected to restore some semblance of leadership in an administration adrift for weeks.

Cameron, 73, is a retired community consultant whose eclectic career took him from police chief (in Irmo, S.C. and Fernandina Beach) to city manager to college faculty member and St. Johns County’s assistant county administrator for community services from 2006 to 2015, a job he left because he was in a state retirement program that required him to stop working in government for a period. He also has extensive private sector experience in construction, home-building, running a water-sports resort in the Caribbean, a Marina in St. Augustine and a Honda motorcycle shop.
Today’s was his “first job interview in over 30 years,” Cameron said. “Usually, “people seek me out, saying, ‘would you come do this.'”
Cameron was one of just two candidates left on a shortlist that last week had stood at four, from 16 applicants. But Glenn Irby, formerly the Apopka city manager, withdrew last week, saying he’d taken another job, and Mike Esposito, a special projects director for Flagler County, told commissioners late Sunday night in an email that he was withdrawing. Esposito said he would be focusing on his current job for now, and may apply for the permanent position. The fourth candidate who did make it through interviews today was Ted Lakey, 61, who’d been administrator in Jackson and Taylor counties. 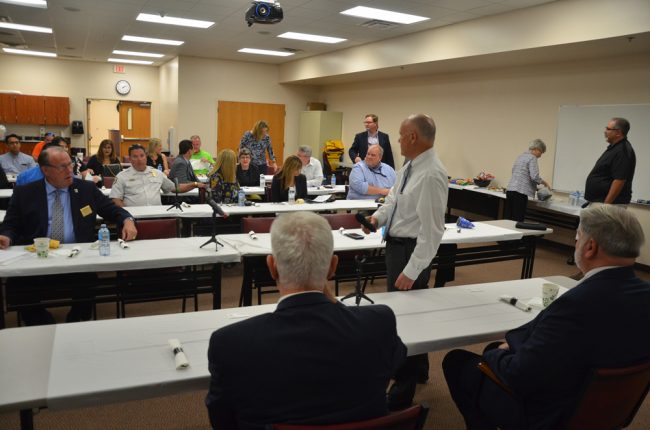 The lunch interview set-up with the two candidates this afternoon, with all the county’s directors facing Cameron and Lakey. (c FlaglerLive)
The five county commissioners each individually interviewed the two candidates in 45-minute sessions this morning. The sessions were open to the public and press, though only Commissioner Joe Mullins drew a small audience–Lynne Rosewater of the Hammock, and Flagler Chamber President Jorge Gutierrez.

The candidates then sat through a lunch-interview, with about three dozen people interviewing them simultaneously: The commissioners and the county’s directors and top staff. The two candidates side sat by side facing six rows of tables filled with directors and staffers facing them, with four of the five commissioners and the county attorney sitting in the first row. (Don O’Brien, the commission chairman, introduced the proceedings then sat at the last table, ceding the grounds for the staff to ask questions. There was not a single member of the public present, and only one reporter, though the meeting was publicly posted.)
Both Cameron and Lakey have understated, unassuming personalities, their demeanor calm and workmanlike, their humor, if at all audible, only a distant echo to their prosaic immersion in the sausage-making of government management. As they sat next to each other and addressed county directors and commissioners during lunch, a prime opportunity for each to try to one-up the other, neither did so, neither seemed inclined to want to do so, and neither seemed to have an interest in showing off, or showing up his competitor. They were clearly a bit stiff from the uncomfortable set-up, but neither seemed to need to be overly cautious in answering questions, fielding the questions comfortably, though answering them more generally than not.
In sum, they came across as sharp contrasts with Coffey, whose outsized personality sometimes became so sizable as to trip him. And neither gave the sense of being a micromanager, as Coffey tended to be with some departments (but not others).
Cameron said there are those who love him and those who hate him. “The ones that are part of the solution always love me, that’s kind of my style,” Cameron said. Department heads who have matters under control may not see him for two weeks, he said, suggesting that he’s not big on micromanaging.
“I’m on the same page with him, I’m not a micromanager,” Lakey said, describing himself as fair and straight-forward. He described himself as “an honest person, a fair person, someone you can always get a good answer from.”
As commissioners discussed whom to hire, it quickly became clear that Cameron was their choice, but Commissioner Charlie Ericksen, who was also leaning toward Cameron, proposed also hiring Lakey as the deputy county administrator. 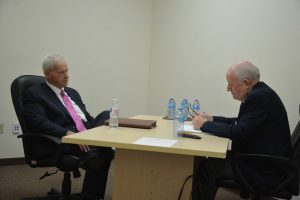 Lakey with Commissioner Dave Sullivan during their one-on-one interview. (c FlaglerLive)
“If that’s doable, I would love that, but I’m not sure that’s doable,” Commissioner Greg Hansen said: the deputy position is an exclusively administrative position that’s under the purview of the administrator, not the commission.

“I would be in favor of Mr. Cameron,” O’Brien said. “Mr. Cameron has a little extra checking off the boxes with respect to experience in a coastal county and a larger county with a more complicated set of operations, so that’s the direction I’m coming down. It would be interesting to be able to hire both, but I was going to bring this up probably at our meeting this evening, but I think we ought to consider looking for a project manager, if you will,” for the sheriff’s operations center: he wants the commission’s next focus on hiring that individual.
Lakey and Cameron both sat in the room, at the Emergency Operations Center, as the commission discussed their fate before voting in a meeting that began at 3 p.m. this afternoon.
As a faculty member at the University of Florida’s Institute of Police Technology and Management, Cameron taught budgeting, management, body language, roadside interviewing, interrogating and ethics–subjects that, speaking with a reporter, he said might make some of his directors nervous.
Not that the county’s director needed priming to be nervous.
Matt Dunn, the county’s tourism director and one of its directors more anxious about his future locally–he was closely associated with Coffey’s administration–asked the two candidates what their experiences were, working for tourist development councils. They both answered flatteringly. “TDC did a good job in helping us with funding for beach restoration” and other developments that helped St. Augustine list it as a leading tourist destination, he said.
Cameron did not say what he told Mullins during his one-on-one interview a short time before. “TDC is a mess,” Mullins told Cameron. “That’s par for the course,” Cameron responded. Mullins’s perception is at the root of Dunn’s anxiety.
Roy Seiger, the county’s airport director, asked the pair about their longer-term plans in Flagler: would they apply for the permanent position?
“You want to take this first?” Cameron asked Lakey. 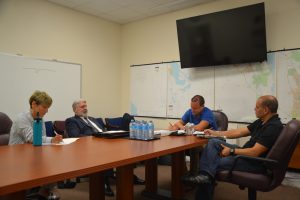 Cameron in his interview with Commissioner Joe Mullins, with Lynne Rosewater, left, and Chamber President Jorge Gutierrez. (c FlaglerLive)
A president once said I guess it’s what your definition is,” Cameron then said, referring to Bill Clinton’s famous paraphrase on the verb “is.” Cameron did not give a precise time, but said he is taking the job with the understanding that his time is limited, and that he will help make the transition for the next, more permanent manager. In one-on-one interview, he had been more precise, placing a three-year limit on his tenure in Flagler, thus suggesting that he would be all in to take the permanent job. Of course, Flagler Beach held on to its interim manager, Bernie Murphy, for four years until his exit in late 2010.

Then there was this from Adam Mengle, the county’s planning director: “Are you a leader or a manager, what’s the difference, and which one do you think we’re looking for here.”
Mengle did not get clear answers. “A leader,” Cameron said, “is someone you want to follow.” There is a management component to leadership, he said, such as bringing people with different agendas together. The most important resource, he said, is an organization’s people. “Leadership is exactly that, it’s developing people that want to follow you.” He did not say which he thought Flagler’s directors are looking for–a manager or a leader.
Lakey said “you have to be both,” and pretty much left it at that.
Holly Albanese, the county’s library director, asked how the two candidates saw the role of a public library: of course, both candidates spoke highly of public libraries. But then Albanese raised the question of the homeless camp pitched in the woods behind the library, and what the candidates would do about its consequences.
Lakey asked whether social agencies or programs locally could work with the county to help. But he didn’t have much else to offer. “What we don’t have here is a homeless shelter,” Albanese clarified.
“The homeless issue is an enigma,” Cameron said. “Unfortunately you are limited in the way of legislation on what you can do with those,” he continued, with other complications adding to the challenge when it comes to housing. With camps, “the only solution we really found that relieved the pressure was two-fold. We filtered the computers, so that cut down on the demand for computers, and we hired a security guard. That made things a lot more pleasant for people that worked at the library.” (The county library computers are filtered.)
Commissioners didn’t rehash their own one-on-one interviews when they took up their agenda at 3 p.m. They complimented both applicants, discussed the position of deputy, opened the floor to public participation–there was none–then took the vote.
Cameron and Lakey, who’d sat next to each other during the proceedings, shook hands, then Cameron–who wore a Paul Harris pin on his lapel, signifying he was in the Rotary Club’s Paul Harris Club two times over) had a conversation at the first station of his next months’ calvary: the county attorney and the human resources director.
On his way home 30 miles to the north, he was likely to listen to the book on his phone currently: the original Epic of Gilgamesh. (He described himself as a voracious reader. The print book on his nightstand currently is Alex Epstein’s “The Moral Case for Fossil Fuels.”)
The special meeting was over in 14 minutes. 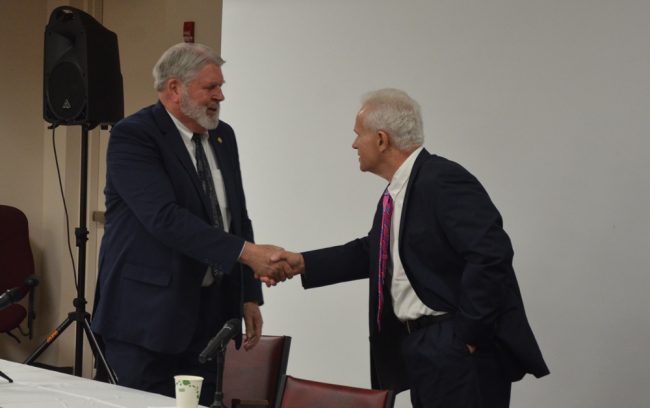