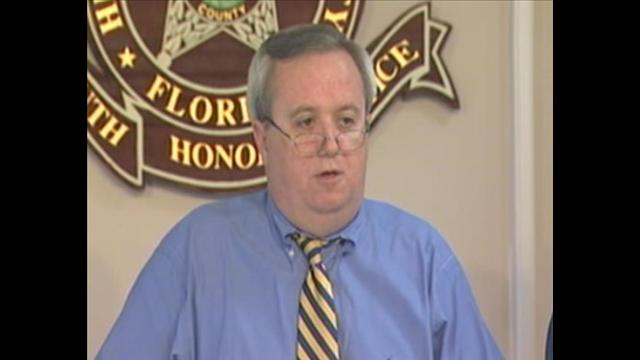 ST. JOHNS COUNTY SHERIFF DAVID SHOAR, formerly known as "DAVID HOAR" (he changed his name to have a more mellifluous name for running for office). SHOAR now admits his office spent "hundreds of hours" aiding and abetting n0-bid purchase of $1.8 million Bell luxury jet helicopter that was incapable of killing a single skeeter!

President Harry S Truman once said that “the only thing new in the world is history you don’t know yet.”

Last night, I read into the record of the Anastasia Mosquito Control Commission (AMCD) of St. Johns County a short excerpt from an angry, inflammatory April 25, 2011 letter that St. Johns County Sheriff DAVID SHOAR f/k/a “DAVID HOAR” wrote to AMCD Commissioners. The quotation, from the second paragraph, is about the ill-fated $1.8 million no-bid helicopter proposal. The background of the letter is that SHERIFF SHOAR -- offended and hurt by possibly selective quotations by St. Augustine Record reporter JENNIFER EDWARDS -- insulted Commissioners and threatened them that he could “weigh in” in support of plans by St. Johns County Commissioners to take over the Mosquito Control District.

Here is the history we did not know until last night -- here is what Sheriff DAVID SHOAR wrote about the helicopter debacle:

As you may or may not know, approximately five and a half years ago I was contacted by the Anastasia Mosquito Control District (AMCD) to assist in the process of researching the possibility of AMCD acquitting a helicopter to utilize in the spraying of mosquitoes. Your board requested assistance from some of my employees who are considered subject matter experts in helicopter aviation because of their affiliation with the Sheriff’s Office Aviation Unit. In the spirit of cooperation, I readily agreed and one member of my senior staff worked tirelessly for hundreds of hours assisting your agency.

Hundreds of hours? For what?

A veritable snowjob, one supposing that AMCD needed to buy a $1.8 million, no-bid helicopter from TEXTRON’s Bell Helicopter Division, an organization that had bribed customers around the world.

BARBARA BOSANKO, spouse of former County Attorney DANIEL BOSANKO, was for two years the Chair of the AMCD. She abused Sheriff’s office resources to call deputies to attempt to roust citizens speaking against the helicopter, on one occasion committing an alleged Sunshine violation with AMCD’s then-counsel and another then-Commissioner – a Sunshine violation that was videotaped by AMCD staff, broadcast and then presented on the front page of the St. Augustine Record with six (6) photographs.

Of course, our State’s Attorney and Florida Department of Law Enforcement, with delusions of adequacy, never prosecuted or took the case to the Grand Jury.

BARBARA BOSANKO had Sheriff’s Deputies called when former Army Captain Don Girvan was criticizing the helicopter purchase during a budget hearing – BOSANKO interrupted him and insulted him, he suggested she resign, and she replied she was “calling the Sheriff.” She did. The resulting spectacle of a young Sheriff’s Deputy walking into a government meeting, asking who was in charge, and attempting to roust Don Girvan and I was comical – it belonged on The Andy Griffith Show”

Sheriff SHOAR’s deputies were present at several meetings, once posted directly behind then-Commissioner John Sundeman and Commissioner Jeanne Moeller. That was supposed to have a chilling effect on all of us – but, as it turns out, we were not scared of the lugubrious goobers and gomers sent by Sheriff SHOAR.

As any television sales-snow-jobber would say, this was “not just any helicopter!”

It was a luxury six-seater TEXTRON Bell Helicopter Long Ranger more suited to transporting DONALD TRUMP than to killing mosquitoes. In fact, the helicopter was unadorned by a single device capable of killing a single mosquito. The helicopter was falsely described as a “sole source.”

Activists persisted. Environmentalist Robin Nadeau, now 85, had asked me to stop the helicopter in December 2006. I kept my word. (No one says “no” to my friend Robin Nadeau).

After Mosquito Control Commissioners realized they were hoodwinked, the victim of a snowjob, AMCD got a refund of its $81,000 deposit.

The helicopter case was the most wonderful thing ever to happen to St. Johns County – the people united in their wrath and halted waste, fraud and abuse.

Now we know that Sheriff DAVID SHOAR was at the heart of a possible criminal conspiracy to defraud taxpayers.

Last night, I asked the AMCD to provide Sheriff SHOAR’s letter to the United States Attorney.

Efforts to obtain documents on the helicopter deal from Sheriff SHOAR have been unavailing – he thinks he is above the law.

Because the answer was “yes,” the “policy” was a “policy.” That answer had consequences – since the policy was violated by lack of competitive bidding, that meant that the contract for the helicopter purchase was “void ab initio.”

Rather than answer this first-year law school question with a “Yes,” AMCD attorney GEOFFREY DOBSON got up and quit in January 2007, at the first meeting attended by Commissioners Sundeman and Moeller. DOBSON did so on the expressed basis that he had been “insulted.”

Asked who “insulted” him, he demurred, saying it was “Mr. Slavin.” (I never insulted him – I simply asked questions).

Now semi-retired, the talented GEOFFREY DOBSON was long the controlling switchboard for the developers and good-ole-boys in St. Johns County, representing both government entities and the developers who needed their services. This was documented in my October 18, 2006 interview with DOBSON, reprinted here:

George Santayana said “those who do not learn the lessons of history are condemned to repeat them.”

For that reason, it is right and just for the Mosquito Control District to crack down on VIVIAN BROWNING’s strange romance with Sheriff DAVID SHOAR in pursuit of a helicopter we don’t need.

St. Johns County needs an ethically-impaired Sheriff like a moose needs a hatrack.

Sheriff SHOAR should hang his head in shame – he’s one of the truly “shameful people” of St. Johns County – someone who promised five times in writing he would contact MICHAEL GOLD about Lashon hara on his websites, and never kept his promise.

We should denounce Sheriff DAVID SHOAR – and all his works and pomps.

This Sheriff is no slouch. It appears that he’s an ethically-impaired Machiavellian, a smooth-talking putative “Christian” whose buddy (MICHAEL GOLD) runs hate sites he will not denounce.

It appears that SHOAR is a smarmy, insincere developer-driven Massachusetts man with a Master’s Degree in Public Administration – quite a combination, don’t you reckon?

In the words of John Randolph of Roanoke, Sheriff DAVID SHOAR is “like a rotten mackerel by moonlight – he both shines and stinks.”

We are blessed to have an educated Sheriff.

We are cursed to have an ethically-impaired Sheriff.

Some people thought Sheriff DAVID SHOAR was a progressive when he ran in 2004.

He may have been by comparison with his opponent, but that’s not saying much.

He’s not a progressive.’

Does Sheriff SHOAR needs to go out the door in 2012?

We deserve a SHERIFF who is “independent,” as SHOAR claimed to be in his amazingly unprofessional, wounded hate letter to AMCD. SHOAR is about as “independent” as any other political hack – and he’s about as sharp as a mashed potato sandwich with the crust cut off.

By the way, the use of local law enforcement to chill, coerce and intimidate First Amendment protected activity has a long tradition in this County. Consider the dialogue that took place here on June 11, 1964, with Rev. Dr. Martin Luther King, Jr. and Virgil Stuart, then police chief. See transcript below, provided by St. Augustine civil rights historian David Nolan.