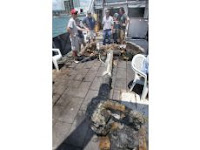 CARTERET COUNTY — The largest artifact recovered to date from the Queen Anne’s Revenge shipwreck off the Carteret County coast made its public debut Friday after nearly 300 years on the sea floor.

A burst of cheers rang out as the anchor reached the water’s surface and was hoisted aboard the research vessel Dan Moore and a camera-carrying crowd gathered later at the Crystal Coast Visitors Center in Morehead City to see the first anchor raised from the site.

“It’s fascinating to have the shipwreck offshore and to know it has survived all these years,” said Jill Dischler, who stopped by the visitor’s center for a peek at a piece of the area’s maritime history.

Dischler was vacationing in the area from New Jersey and was excited to see the anchor, especially since they’d miss the June 11 opening of the Queen Anne’s Revenge exhibit at the North Carolina Maritime Museum in Beaufort.

“We heard this might get delayed to Wednesday so we were really glad that it didn’t,” she said.

Unfavorable sea and wind conditions delayed the recovery of the anchor for a day but everything went well Friday morning as two 2,000 pound lift bags were inflated and used to raise the anchor from the underwater home it has had since 1718, when the flagship of the infamous pirate Blackbeard ran aground in Beaufort Inlet.

The recovery of the anchor was the focus of a spring dive expedition at the site by the N.C. Department of Cultural Resources Underwater Archaeology Branch and its partners.

As the anchor head to the conservation lab, the QAR team will continue the dive next week.

“We’ll be using the time to bolster reference stakes and mooring lines and infrastructure that can really take a beating in the coastal environment,” he said.

It will mean less preparation work on future dives as the QAR team reaches its goal of full recovery of the site by 2013.

“We’re slated to get everything up by 2013 and that’s what we’re going to do,” Wilde-Ramsing said.

Also this dive, they are placing aluminum rods called sacrificial anodes on all of the remaining anchors and cannons that do not have them. The anodes help slow and possible reverse the corrosion of the artifacts while they are still underwater, which will reduce conservation time once they are recovered.

As the 2013 goal nears, recovery efforts will focus more and more on an artifact pile with another anchor and eight cannons still to be raised.

“At some point we’ll have the fireworks and hopefully by 2013 there will be lots of days like this,” Wilde-Ramsing said.

N.C. Maritime Museums Director Joseph Schwarzer said the timing of the anchor’s recovery helps build interest in the upcoming Queen Anne’s Revenge exhibit, which brings the project full circle, from recovery of artifacts at the shipwreck site to interpretation of that maritime history for the public.

“What’s exciting is that this (recovery of the anchors) shows the first step and the exhibit will be the final step of putting the story together,” he said.

The exhibit will be the most comprehensive exhibit of QAR materials to date and the Maritime Museum has renovated a third of its space to accommodate the exhibit.

And while the popularity of the latest Pirates of the Caribbean movie fuels the interest in pirates and Blakbeard, Schwarzer said the exhibit will be about much more.

“It’s not a question of glorifying pirates, it’s about a better understanding of our Colonial past,” he said.

The artifacts recovered from the QAR site help give better insight into early 18th century marine activities in the New World, including naval armament and warfare, ship construction and repair, colonial provisioning, shipboard life and the West African slave trade, according to QAR information.

Lauren Hermley, maritime heritage development officer for the Department of Cultural Resources, said the QAR project and events such as the anchor’s recovery are invaluable parts of North Carolina’s maritime history.

“It’s a fabulous thing for Carteret County and for North Carolina,” she said. “Anything that has the ability to generate interest in the collective maritime history of the state is a good thing. We’re also fortunate to have the N.C. Maritime Museum to interpret this history for the public.”

After the anchor was offloaded onto a truck at the State Port in Morehead City it was taken to the Crystal Coast Visitors Center for a brief viewing for the public and then transported to the QAR Conservation Lab in Greenville
Posted by Ed Slavin at 1:59 PM