He has now pled guilty. 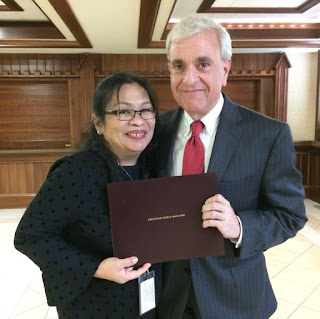 He faces up to 20 years in federal prison, with a minimum mandatory sentence of five years, prosecutors said. After his prison term, he must serve between five years and life on supervised release.

More:Here's how law enforcement finds out when child pornography gets transmitted

The Leon County Sheriff's Office got a tip in February from the National Center for Missing & Exploited Children about child pornography transmitted through a Yahoo email account, according to court records.

Deputies, along with state and federal law enforcement offices, later searched his home, seizing personal and work computers and his iPhone. They found 19 files of child sexual abuse material.

Investigators also found a number of internet searches on his work laptop involving child sexual abuse, pedophiles and children between the ages of 3 and 5, according to arrest records.

He entered the plea during a hearing before Chief U.S. District Judge Mark Walker at the federal courthouse in Tallahassee. He is scheduled to be sentenced March 18.

Lipman joined the Elections Commission in 2001 as an assistant general counsel and became chief legal counsel nine years later. He was fired in April, shortly after his arrest.

Before joining the commission, which investigates violations of Florida's elections laws, Lipman worked as a senior attorney for the Florida Department of Children and Families in Leon, Wakulla and Franklin counties. He also served as an officer with a nonprofit soccer league for boys and girls ages 14 to 17.

In September, attorneys for the 59-year-old Lipman asked that he be given compassionate release from federal detention for cancer treatments, according to court records. Prosecutors opposed the request, and Walker denied it, saying the Bureau of Prisons was taking his condition seriously and that his health was "not at risk."

The case was investigated by Homeland Security Investigations and the Sheriff's Office, with assistance from the Florida Department of Law Enforcement. Assistant U.S. Attorney Justin Keen prosecuted the case.