ERTEL got it -- he's gone, only sixteen (16) days after starting his new career as Florida Secretary of State, having resigned as Seminole County Election Supervisor.

As I wrote last year:

I wrote on this blog last month that:

I recall that Seminole County Supervisor of Elections MICHAEL ERTEL was cruelly unfair with our 2008 Democratic Congressional candidate, economist Faye Armitage, falsely claiming she was two minutes late (untrue) with her last batch of petitions, and refusing to transmit some of her indisputably timely-filed petitions to other counties in what was then the Seventh Congressional District for her race against then-Rep. John Luigi Mica.
Nasty man, this MICHAEL ERTEL.
As they say in East Tennessee, "I wouldn't trust MIKE ERTEL in an outhouse with a muzzle on."
He was just the man for Governor-elect RONALD DION DeSANTIS to try to steal the 2020 election.
Ambitious arachnid apparatchik deserved investigative reporting scrutiny. Now.
The position of Florida Secretary of State was once elected, but voters amended the Constitution in 1998 to make it appointed by the Governor.


January 24, 2019 at 2:20 PM CST - Updated January 24 at 2:20 PM
(Gray News) – Michael Ertel, the Florida secretary of state, resigned on Thursday after pictures emerged of him wearing blackface at a Halloween party more than a decade ago.
The Tallahassee Democrat newspaper obtained and published the photos, from 2005, which show Ertel wearing a racist stereotype costume of a Hurricane Katrina victim.
The Democrat reported it received confirmation from new Florida Governor Ron DeSantis’ office that “the governor accepted Secretary Ertel’s resignation.”
Ertel, the former Seminole County supervisor of elections, was named to the secretary of state post by DeSantis on Dec. 28.
He was sworn in on Jan. 8 and had held the position for 16 days.
His biography on the Florida Department of State website has already been pulled down.

The photo was taken in 2005, eight months after Michael Ertel was appointed Seminole County supervisor of elections and two months after Hurricane Katrina devastated New Orleans.
Posted by Tallahassee Democrat on Thursday, January 24, 2019 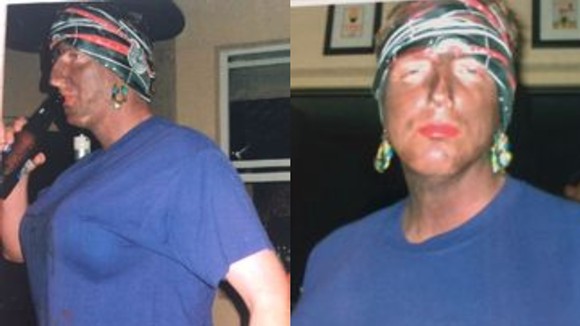 The Tallahassee Democrat reports Florida Secretary of State Michael Ertel has resigned after photos surfaced of him dressed up as a Hurricane Katrina victim in blackface.
Ertel, who had been the Seminole County Supervisor of Elections since 2005, was appointed by Gov. Ron DeSantis to the cabinet position in December.
The Democrat reports the photos were taken at a private Halloween party about eight months after Ertel was appointed as the Seminole County elections chief and just weeks after Katrina killed hundreds in New Orleans. In the photos, Ertel is in blackface wearing red lipstick, earrings, a New Orleans Saints bandanna and a purple T-shirt with "Katrina Victim" written on it. Ertel confirmed to the Democrat that he is the person in the photograph.
Ertel resigned Thursday shortly after the Democrat presented the photos to DeSantis' office.
Posted by Ed Slavin at 12:39 PM