Dutch coastal engineers have come up with an elegant, cheaper, more natural way of replenishing sand on beaches.

No giant bulldozers, huge pipes or safety hazards interfere with enjoyment of our beaches.

This low-tech, appropriate technology promises to help save our beaches and save our money.

It is now being studied by federal and local officials in Washington, D.C. and St. Johns County:

1) PRIOR TO SANDSCAPING: RISK TO LIFE, PROPERTIES AND INFRASTRUCTURE (IMAGE: ROYAL HASKONINGDHV)

1) PRIOR TO SANDSCAPING: RISK TO LIFE, PROPERTIES AND INFRASTRUCTURE (IMAGE: ROYAL HASKONINGDHV)
12 Sep 2017
Bacton Gas Terminal and residents of the surrounding Norfolk villages will benefit from Dutch experience as Royal HaskoningDHV completes the detailed design for an innovative coastal protection project.
It's the first time in the UK that sandscaping will be used to provide a sustainable long-term solution.
Royal HaskoningDHV has adapted the Dutch ‘Sand Engine’ concept – an example of Building with Nature – for the project. In this scheme 1.5 million cubic metres of sand will be placed along the coast to protect a 5km stretch of the UK’s east coast including the nationally critical Bacton Gas Terminal (operated by Shell and Perenco) together with its neighbouring communities.
URGENT PROJECTLong-term coastal erosion is depleting the area’s beaches, leaving cliffs and seawalls exposed. Severe storms in 2007 and 2013 caused significant cliff erosion and flooding, underlining the project's urgency.
The project is a public-private venture of Bacton Gas Terminal together with North Norfolk District Council (NNDC), where NNDC is the Operator.
Gökhan Doygun - Commercial Advisor at Shell responsible for collaboration between the Bacton Terminal Operators, Royal HaskoningDHV and other parties - commented: “The Bacton Gas Terminal is an important energy asset for the UK providing about a third of the UK's gas supply. To protect the Terminal and the associated pipelines, we need a solution which will be sustainable and will allow us to continue operating into the future. Due to its green nature, Sandscaping creates a great opportunity for the Bacton Terminal and the neighbouring villages to collaborate.
“I understand the sandscaping solution does more than just protect the Bacton Terminal as it creates real benefits for our neighbouring communities because the sediment will improve the beaches nearby. It is also a sustainable solution as it can be re-nourished and maintained.”
John Lee, NNDC cabinet member for coastal management added: "This is a ‘once in a lifetime’ opportunity to bolster sea defences at Bacton Gas Terminal and protect the villages of Bacton and Walcott – and this is the only viable way to strengthen our sea defences here. It’s an exciting project which shows the benefit of the public and private sectors working together.”
NATURAL ENERGYJaap Flikweert, Flood Resilience Leading Professional at Royal HaskoningDHV added: “In the Sandscaping initiative we are working with British partners to translate the Dutch Sand Engine to the very different context of the UK. It is all about using the natural energy of the sea to distribute the sand, and this can make sandy solutions affordable. It enhances the natural coastline without leaving a permanent mark, and can also be adapted and extended easily if needed in the future. Sandscaping also means design for multiple functions and stakeholders, to generate benefits and funding.”
The volume of sand to be used at Bacton is approximately equal to 200 football pitches covered 1 metre deep in sand, and will come from existing licensed dredging areas.
Public consultation has begun and Royal HaskoningDHV’s work on the Environmental Impact Assessment (EIA) is underway. The company will also prepare the business case to secure national Government funding, as well as developing the operations, maintenance and monitoring plan for the scheme with placement due to take place during summer 2018.
The first Sand Engine was introduced in 2011 on the Dutch coast and offers an effective soft coastal management solution making use of natural processes. The method entails depositing a large volume of sand in a location from which it is distributed by coastal processes over a larger part of the coast.
Royal HaskoningDHV was heavily involved in the design of the original Dutch concept, as well as delivering the Environmental Impact Assessment (EIA). The Bacton project is the first time the concept will be applied outside the Netherlands.
By Jake Frith

From Wikipedia, the free encyclopedia
Jump to navigationJump to search 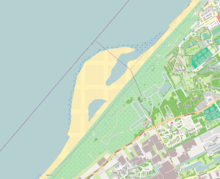 Map of the sand engine
The sand engine (also called Sand Motor) is an experiment in the management of dynamic coastline. The first one was run off South Holland in the Netherlands. A sandcastle-shaped peninsula was created by humans; the surface is about 1 km². It is expected that this sand is then moved over the years by the action of waves, wind and currents along the coast. To protect the West of the Netherlands against the sea, the beaches along the coast are artificially replenished every five years, and it is expected that the sandcastle will make replenishment along the Delfland Coast unnecessary for the next 20 years. This method is expected to be more cost effective and also helps nature by reducing the repeated disruption caused by replenishment.[1]
For the first time in 2011 at the request of the Hoogheemraadschap van Delfland as part of the coastal management and the maintenance of the coastline by the highways and the province of South Holland, a peninsula was created between Ter Heijde and Kijkduin, where natural beaches and dunes are relatively narrow.
In 2017 it was announced that another sand castle would be built in Norfolk, United Kingdom.[2]

Professor Marcel Stive is considered the inventor of the Sand Castle.[3] Another such project could provide a solution to the weak coast between Camperduin and Petten, which is called the Hondsbossche seawall. The experience of this first sand castle is interesting for future projects. The construction of the sand engine at Ter Heijde cost 70 million euros and is the first in the world of its kind. Joop Atsma, State Secretary for Infrastructure and Environment, presented the project in November 2011 and his purpose was to convince that the technique of sand engine could be useful on more locations along the Dutch coast.[4]
The first such project was given the name Delta Dune.[5] Work began in January 2011. The conditions were favorable and thus the operation was completed in October 2011. A volume of 21 million cubic meters of sand covers an area of 128 hectare.
In 2017 it was announced that another sand castle would be constructed to protect the Bacton Gas Terminal and surrounding area in Norfolk, in the UK.[2]