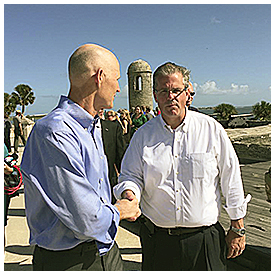 JOE SAVIAK has been hired as Executive Director of the Flagler County Sheriff.  SAVIAK left Flagler College last month.
Why this matters:

Flagler College wisely decided it no longer needed SAVIAK's services, such as they are.

I've asked the Flagler County Sheriff for the Joe Saviak hiring documents, including the job vacancy announcement to which he responded, showing where it was posted/advertised: