As if floor-planned by Republicans and their Russian disinformation allies, Confederate monument and memorial fixation helped cost good Democrats a Senate seat and the positions of Governor, Attorney General and CFO in the Florida Cabinet.

Andrew Gillum and other Democrats were misguided, costing votes.  Even though Mayor Gillum wise distanced himself from Gainesville minister Rev. Ronald Rawls, Jr., the contretemps helped drive away voters.  Call Rawls what he is: an undercover Republican.

From The New York Times, a perhaps overly pessimistic but sobering account:

PEMBROKE PINES, Fla. — After a painful midterm election for Florida Democrats that showed this crucial swing state drifting away from them, a group of party activists gathered at a Cuban restaurant last month to receive some bitter medicine — and a sober warning — to go with their croquettes and plantain chips.
Democrats started organizing Latino voters too late, didn’t tailor their message for an increasingly diverse community and ultimately took Latino support for granted, a Florida pollster told about 50 members of the Democratic Hispanic Caucus of Broward County.
Democrats will lose again in 2020 if they don’t move swiftly to win over Hispanics, the pollster, Eduardo Gamarra, told the group. “You just need to start now,” he said.
With the swearing-in last Tuesday of two newly elected Republican leaders, Gov. Ron DeSantis and Senator Rick Scott, Florida has become a more reliably red political bastion, making the path to Electoral College victory that much tougher for the 2020 Democratic nominee.
ADVERTISEMENT
For Republicans, Florida stands out as the best political news from an otherwise grim year, a show of strength in a state that has voted for every presidential winner since 1992 and seems to be growing more favorable to their party at a moment when demographic changes are lifting Democrats elsewhere. The successful courting of up-for-grabs Hispanics, the surge of transplanted senior voters, the solidifying support in conservative North Florida: All illustrate why this prized battleground state is tilting to the right.
As for Democrats, they remain just as shellshocked as they were after Election Day, when it became clear that Bill Nelson, the state’s longtime senator, and Andrew Gillum, the electrifying young mayor of Tallahassee, had lost by exceedingly close margins. As of Tuesday, there was still only one Democrat in statewide office.
“We just live in a red state here,” said Alex Sink, a former Democratic state official who once narrowly lost a bid for governor. “I think it’s just tilted toward the Republicans now, and I hate to say that.”
The question looming over the state going into 2020 is the same one Democrats are wrestling with elsewhere: How can the party narrow its losses with voters who are older — and in many cases white — without alienating younger, nonwhite voters?
What is so agonizing for Democrats is that 2018 did little to clarify the best path. The party put forward Mr. Gillum, a 39-year-old black progressive, and Mr. Nelson, a 76-year-old white moderate who had been in elected office for nearly half a century. Mr. Nelson lost by about 10,000 votes and Mr. Gillum didn’t fare much worse, losing by about 32,000 votes. 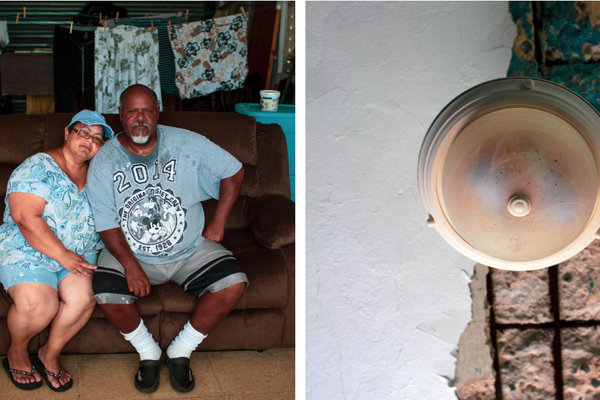 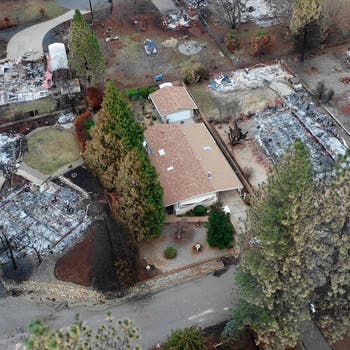 What’s Next After the Camp Fire Destroyed Paradise 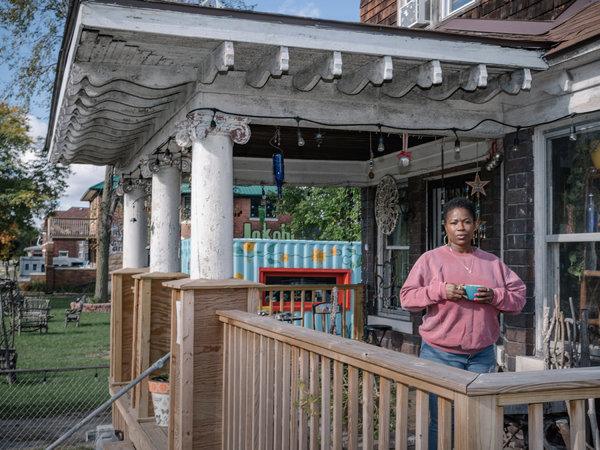 On the Front Porch, Black Life in Full View

ADVERTISEMENT
In other words, the party pursued two differing approaches in the same state and the same year — nominating a progressive who could mobilize voters difficult to turn out in midterms as well as a moderate who would appear more amenable to persuadable voters — and both failed.
That has done little to extinguish the intraparty debate, after a banner year for Democrats nationally, when they gained 40 House seats and seven governorships amid a backlash against President Trump.
Some moderates, including Ms. Sink, say flatly that Democrats would have won the governorship had they nominated former Representative Gwen Graham, who narrowly lost to Mr. Gillum in the primary. “What would they have pinned on her?” asked Ms. Sink, alluding to Mr. Gillum’s left-wing politics and to an F.B.I. investigation into potential corruption in public real estate development in Tallahassee under Mr. Gillum.
More broadly, the pragmatic wing of the party argues that the only way to win in such a dead-center state is to promote consensus-oriented candidates who can limit Republican margins in Florida’s rural and exurban areas.

A spotlight on the people reshaping our politics. A conversation with voters across the country. And a guiding hand through the endless news cycle, telling you what you really need to know.
Gov. Ron DeSantis and his wife, Casey, arrived for his inauguration ceremony in Tallahassee on Tuesday.CreditLynne Sladky/Associated Press 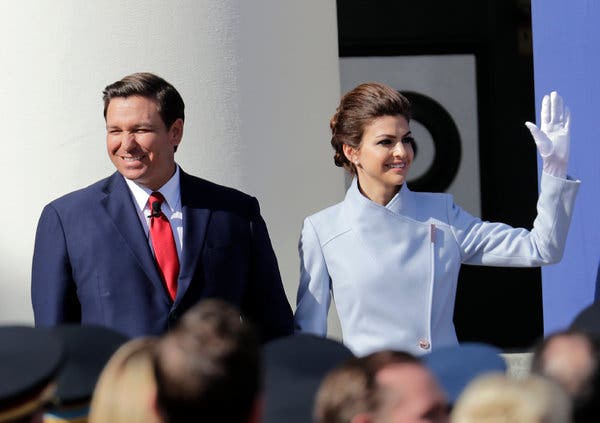 Ms. Graham said the results last year made it clear that “you have to have a candidate who can make a difference in areas where having a D behind your name makes people suspicious.”
Mr. Nelson, the recently ousted Democratic senator, says he has a preferred 2020 candidate, who he thinks might turn things around: former Vice President Joseph R. Biden Jr.
“I would say of the whole crowd, I think Biden would have the best chance in Florida,” Mr. Nelson said of the 2020 field, allowing that he has encouraged his former colleague to run and believes he would be perceived “as moderate enough.”
ADVERTISEMENT
But these sorts of assessments make progressives want to pull their hair out.
Pointing to the near-identical results, they argue that many of the state’s conservative-leaning voters made little distinction between Mr. Gillum and Mr. Nelson. Mr. Gillum’s supporters also note that he improved upon the losses of the last two Democratic nominees for governor, who were both white.
“He got closer than anybody else did,” said State Senator Oscar Braynon II, a Miami-area Democrat, pointing to how African-American turnout spiked from the last race for governor and suggesting no other candidate could have done that.
If the Democrats’ challenges in Florida are difficult to resolve, they are easy enough to diagnose.
Florida is a microcosm of the country — and some of what is dogging Democrats in the state reflects the party’s broader challenges.
“This is not a progressive state,” said Philip Levine, the former Miami Beach mayor who also ran unsuccessfully for governor. “And that, in my opinion, is representative of the state of our country today. Florida is America.”
Florida’s rural white voters, as elsewhere, have abandoned their ancestral allegiances and become reliable Republicans.
At the same time, Fox News-watching seniors from the Northeast and Midwest are flooding the state’s retirement communities. They can be counted on to vote regularly, and they are increasingly supporting Republicans.
“You have a lot of retirees who reminisce about their childhoods every time they hear Donald Trump say ‘Make America Great Again,’” said Representative Darren Soto, an Orlando Democrat. “And they vote in a higher percentage than anybody else.”
ADVERTISEMENT
These transplants descending on Central Florida, the Gulf Coast, the Panhandle and parts of the Atlantic Coast run the socioeconomic gamut but share the same Republican loyalties. For example, two of the three counties with the strongest turnout in November were retiree hubs with notably different profiles.
The party’s best-performing county in the state was Sumter, the Central Florida enclave that is home to the Villages retirement community and its thousands of golf cart-driving, middle-class seniors. But turnout was nearly as strong in Collier County, a more well-heeled community on the gulf that includes Naples.
Mr. Gillum and Mr. Nelson both received less than 35 percent of the vote in Collier County and less than 30 percent in Sumter County. These voters have little connection to state politics, are largely grounded in national issues and are overwhelmingly supportive of Mr. Trump.
Mr. Nelson still sounded in near disbelief weeks after his loss, which he attributed to Mr. Scott’s self-financing and the faulty design of the Broward County ballot, which all but hid the Senate race on a bottom corner of the page.
People protested Mr. DeSantis as he was sworn in on Tuesday.CreditLynne Sladky/Associated Press 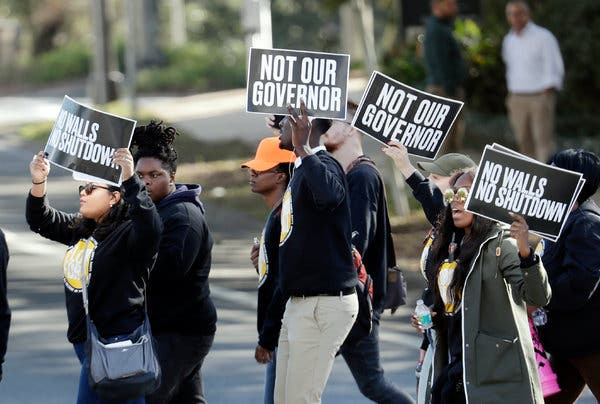 But he seemed particularly anguished as he recounted losing the county where he grew up.
“We only got 43 percent,” he said of Brevard County, contending that many there were not aware of his roots or what he had done for nearby Cape Canaveral.
Mr. Nelson recalled setting up a press round table at a local restaurant with a former NASA administrator who was supporting his campaign. When his staff arrived, he said, the manager on duty was so rude they decided to move the event elsewhere.
“He was just a Trump guy,” said Mr. Nelson, lamenting the state and country’s drift toward what he called political “tribalism.”
ADVERTISEMENT
More unique to Florida is the Republican Party’s success at cutting deeply into the Democrats’ share of the Latino vote.
Hispanic voters in Florida are more ideologically diverse than elsewhere in the country, and Democrats have lagged behind Republicans in understanding the nuances of these voters. According to a postelection survey conducted by Mr. Scott’s campaign, which courted the bloc relentlessly, he won 48 percent of the Latino vote.
He and Mr. DeSantis both broadened the traditional Republican pitch to Cubans — that they represent the party of freedom — to woo more recent Central and South American immigrants who have also fled authoritarian regimes. And Mr. DeSantis used Mr. Gillum’s support from Senator Bernie Sanders to label him a “socialist,” which has a more sinister connotation with these more recent émigrés than with many Americans.
Beyond Hispanics, Florida Republicans have long outperformed Democrats in their organizing efforts, especially when it comes to mobilizing reliably conservative voters in off-year elections. The party has had a virtual stranglehold on state government for more than two decades, giving it an advantage when it comes to redistricting, fund-raising from special interests and creating a farm system of new candidate talent.
Democrats have not won the governor’s mansion since 1994. The only Democrat in statewide office is Agriculture Commissioner Nikki Fried, whose election represented one of the few bright spots for Florida Democrats this year, in addition to a ballot measure restoring voting rights to ex-felons.
Ms. Fried’s success offered Democrats a few clues for how to win in the state: She ran on legalizing medical marijuana, gun control and addressing Florida’s toxic algae. And Ms. Fried spent the last 24 hours of her race in a decidedly unusual region for a Democrat: Florida’s deep-red Panhandle.
“There are so many issues that transcend partisan politics, and too many times we all get into our pigeonholes of what we’re supposed to say and what we can get behind,” she said.
ADVERTISEMENT
Last month, the local party leaders hosted Tom Perez, the chairman of the Democratic National Committee, during Art Basel Miami Beach, one of the year’s biggest events. Over lunch at Joe’s Stone Crab, Democrats made the case for bringing the party’s 2020 convention to Miami, acknowledging they could use the boost, according to Dan Gelber, the current Miami Beach mayor.
“Our toast tends to fall butter side down,” he said.
Few Democrats know that better than the veteran Hispanic activists who gathered in Broward County a few days later to listen to Dr. Gamarra, a professor at Florida International University who studies public opinion among Latinos.
“It’s the same thing over and over and over again,” said Maurice A. Ferré, who served as Miami’s first Hispanic mayor from 1973 to 1985. The Democratic Party, he said, “feels that they can turn the switch on just a couple of months before.’’
Well, it never worked that way,” he said, “and it never will.”
A version of this article appears in print on Jan. 14, 2019 of the New York edition with the headline: Democrats Seek Best Lure as Florida Drifts Away. Order Reprints | Today’s Paper | Subscribe

In Florida, Not All Politics Are Local, as Trump Shapes Governor’s Race

A Centrist and a Liberal Test Florida, and Democrats Everywhere Watch Closely