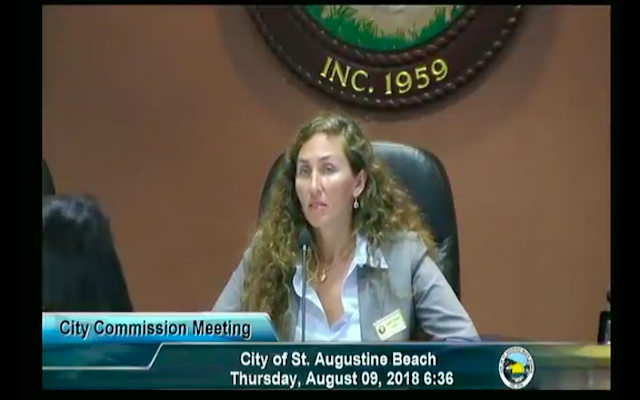 Two days ago, I wrote St. Augustine Beach Mayor UNDINE PAWLOWSKI GEORGE about her unconstitutional, unctuous, ukases and rude behavior at the Tuesday, January 8, 2019 City Commission meeting, where she:

I asked to talk to Mayor GEORGE about her bad excuse for performance art, as if channeling the ghosts of Richard Milhous Nixon, Captain Queeg from the Caine Mutiny, and Col. Nathan Jessup from A Few Good Men.

In the immortal words of William F. Buckley, Jr., "Why does baloney reject the grinder?"

Perhaps psychiatry or a walk on the beach might help this joyless juvenile St. Augustine Beach Mayor UNDINE GEORGE.


I rated UNDINE GEORGE our "Worst Mayor"  in Folio Weekly superlatives last week. She reminds me of the narrow-minded joyless city officials in the movie, "Footloose."

Mean Mayor UNDINE GEORGE has a "whim of iron": it was she who first pushed the notion of using credit cards and smartphones to pay for parking in a small beach town, arising from her:


Police officers have a legal duty to disobey illegal orders, like those that Mayor GEORGE would like to give to remove people engaging in First Amendment protected activity.

Police officers will not indulge the delusions of this juvenile judgmental Mayor, whose hare-brained smartphone parking app scheme is in flames.

The next time Mayor UNDINE GEORGE makes an illegal order, as she did to citizens Tom Reynolds and Merrill Roland eleven months ago, Chief Robert Hardwick is now on notice that he is duty-bound to refuse it, or risk being sued for civil rights violations for violating the First Amendment.

2.5 Police officers must obey lawful orders, but must refuse to obey any orders the officer knows would require the officer to commit an illegal act. If in doubt as to the clarity of an order, the officer shall, if feasible, request the issuing officer to clarify the order. An officer refusing to obey an order shall be required to justify his or her actions.  (Emphasis added)


5. Please send me any League of Cities or law review articles, or case studies or research, on the historic outcomes for elected officials who abuse their authority, including those who stigmatize and mischaracterize human applause and laughter as "outbursts," or who otherwise seek to stigmatize protected activity as "disruptive," including the journalistic, electoral, civil, criminal, Florida Bar, administrative and psychiatric response(s) or sequelae.

Please free to call me to discuss.

With kindest regards, I am,
Sincerely yours,