My dad was part of the 82nd Airborne 505th P.I.R., which parachuted in at 1 AM and swiftly took over the first Nazi-occupied European town before sunrise.
It was 78 years ago, on D-Day, June 6, 1944.
My dad was a proud anti-fascist.
So am I.
So are the people of the United States of America.

It was 78 years ago, on June 6, 1944, my late father, Edward Adelbert Slavin, Sr. parachuted into Sainte-Mère-Église in Nazi-occupied France with the 82nd Airborne Division, 505th Parachute Infantry Division, F Company.   It was the first town in France that was liberated from the Nazis.  His 505th P.I.R. was the first to jump that night.

Dad landed on a roof by a French farmhouse. The farmer offered him refuge, thinking dad was a pilot who had been shot down. Dad thanked the farmer, but declined, saying "No, I have to go fight" the Nazis.

The Southern New Jersey Chapter of the 82nd ABN DIVN ASSN is named for my dad, the "CPL EDWARD A. SLAVIN Chapter."

I sometimes wear dad's "CPL EDWARD A. SLAVIN Chapter" jacket to events, including occasions when our City of St. Augustine is violating human and civil rights.

In his spirit, we band of brothers and sisters in St. Augustine have repeatedly defeated the forces of oppression more than 63 times since 2005.

In his spirit, we wear oppressors' scorn as a badge of honor.

In his honor, we fight for freedom daily here in America. And in the words of UN weapons inspector Hans Blix, like any good diplomat, "we won't take no for an answer." (My late friend Stetson Kennedy, who infiltrated and reported upon the KKK in Georgia and Florida, called me a "freedom fighter.")

In the words of the "weather prayer, written by a Roman Catholic priest for Third Army General George S. Patton, Jr. before the Battle of Bastogne:  "Graciously hearken to us as soldiers who call upon Thee that, armed with Thy power, we may advance from victory to victory, and crush the oppression and wickedness of our enemies and establish Thy justice among men and nations."
From Military History Online:
Sainte-Mère-Église
Sainte-Mère-Église stood in a pivotal location between Cherbourg and Caen whose capture fell to the 82nd Airborne. Unfortunately, sections of two planeloads of parachutists (2nd and 3rd Battalions of the 505th Parachute Infantry) were dropped directly over the village. To make the decent even worse, a farmhouse had caught fire either from tracers or the preceding aerial bombardment and illuminated the entire surrounding sky - making perfects targets out of the descending paratroopers. Many were killed on their way down, at least two were drawn into the fire itself, and many more were killed by the Germans after becoming entangled in trees and roofs. The few who did make it alive to the ground were almost immediately taken prisoner. After the initial excitement, curiously, the Germans went back to bed after the immediate threat subsided.
The commander of 3rd Battalion, 505th, Lt. Col. Ed Krause, had landed one mile west of the village and quickly began gathering stray men. Within an hour, he had managed to round up around 180 men and began heading straight into the village. As mentioned above, after all the immediate paratroopers were either killed or captured, and the fire had been put out, the German garrison went back to bed. Krause entered the town unhindered and was shown the German billets by a local Frenchman whom they ran across. 30 Germans were captured and about 10 were killed - while others fled to the nearby woods. By 6 A.M. Krause had secured the village and thus, cut off German communication and the main route between Cherbourg and the rest of the German Army.
http://www.militaryhistoryonline.com/wwii/dday/airborne.aspx

Stained glass window in the chapel of Sainte-Mère-Églisedepicting the Virgin Mary and three paratroopers, one of whom is John Steele, my father's friend, who played dead after Nazis shot him in the foot as he hung from an architectural feature (he was played by Red Buttons in the movie, The Longest Day.

Wikipedia reports:
The 82nd Airborne's drop, mission "Boston", began at 01:51. It was also a lift of 10 serials organized in three waves, totaling 6,420 paratroopers carried by 369 C-47s. The C-47s carrying the 505th did not experience the difficulties that had plagued the 101st's drops. Pathfinders on DZ O turned on their Eureka beacons as the first 82nd serial crossed the initial point and lighted holophane markers on all three battalion assembly areas. As a result the 505th enjoyed the most accurate of the D-Day drops, half the regiment dropping on or within a mile of its DZ, and 75 per cent within 2 miles (3.2 km).

Another website states: "The paratroopers jumped prior to the actual start of the invasion "H-Hour". Because of the tradition of being the first into the fight, the 505th Regimental motto is "H-MINUS". For their performance in the invasions the 505th was awarded the Presidential unit citation, the unit equivalent of the Medal of Honor awarded to individual soldiers. In the words of author Clay Blair, the paratroopers emerged from Normandy with the reputation of being a pack of jackals; the toughest, most resourceful and bloodthirsty in Europe."
-------------------------

Freedom is not free.

The U.S. Capitol 1/6 insurrection taught us that freedom must be zealously guarded by all of us. My dad taught me, as JFK's dad taught him, that you have to stand up to people with power or they walk all over you.  As the German immigrant,  Civil War General and later Wisconsin's Republican U.S. Senator Carl Schurz so eloquently said, "My country, right or wrong; if right, to be kept right; and if wrong, to be set right.”

Dad volunteered for military service the day after Pearl Harbor was sneak attacked by Japan.  (The Navy would 't take him because he was color-blind.  So he volunteered to be one of the new paratroopers in the 82nd Airborne Division.)

One Memorial Day, my dad bought American flags for every row house on our block in Pennsauken, N.J., just before we moved to a ten acre former farm in Mantua. The Cathoic Star-Herald ran an evocative photo of my dad holding me up as we adjusted one of the American flags he bought for  Norwood Avenue.   I learned from the caption or "cutline" of that ancient newspaper photograph that my dad was a machine-gunner with the 82nd. He never told me that.

With the 82nd, my dad jumped into Nazi-occupied territory on two continents, in North Africa, Sicily (where dad caught malaria) and Normandy (where dad was wounded).

My dad recovered from his knee wound in U.S. Army hospitals, including one in Amarillo, Texas. Dad later taught map-reading to soldiers at Fort Benning (where he and my mom were married after VJ-Day).

My dad was sometimes called "the old man" by his much younger 82nd Airborne comrades.  He was the "morale non-com."

Research confirms that my dad was one of the oldest men in the 82nd, at nearly 32, when he and the 505th Parachute Infantry Regiment helped liberate Sainte-Mère-Église, the very first French town taken back from Nazi tyranny,  before dawn on June 6, 1944.

The South Jersey Chapter of the 82d ABN DIVN. ASSN., INC. is named in his honor, the "Edward A. Slavin Chapter."  He served on the 82nd ABN DIVN ASSN. Board of Directors for years,

Dad did a lot to find 82nd veterans and enlist them in chapters and conventions.  Dad and I researched newspapers using the Editor and Publisher yearbook we borrowed from the Woodbury Public Library, sending press releases around the Nation.  Dad was grateful when many fellow former soldiers would read articles in their local newspapers (in North Dakota, or wherever). Inspired, they attended conventions, joined nascent chapters, and relived their experiences with former comrades, at a time when Americans had not yet come to grips with PTSD among our veterans,

As a Georgetown University student, I was proud to receive an 82nd ABN DIVN ASSN, INC. scholarship to help pay for my tuition and expenses.(A few years before, during the Vietnam War, my dad proudly stated that I was "anti-war" on national television, in an interview by Joe Garragiola with three 82nd veterans during their annual convention, on NBC's Today Show circa 1970 during the Vietnam War.  It appeared Mr. Garragiola was trying to bait combat vets into condemning anti-war protesters.  My dad calmly replied, "My son is anti-war," ending Garragiola's divisive line of attack.) 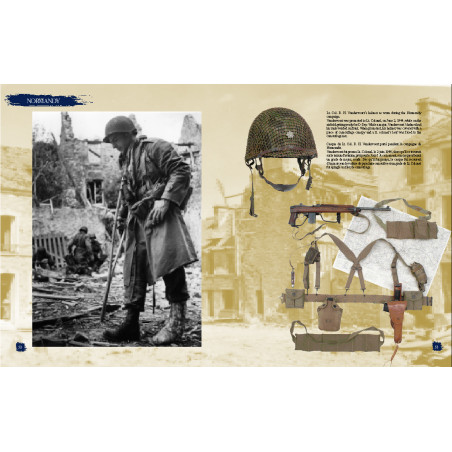 Col. Benjamin Hayes Vandervoort was portrayed by John Wayne in the movie, The Longest Day.

* Footnote: My dad won three Bronze Stars, a fact he also did not tell me, and which I did not learn about until Memorial Day weekend of 1998, when I saw a program on local television interviewing three veterans of three wars, while I was visiting at home during the recess of a nuclear powerplant whistleblower trial in Camden, N.J., where I was born,

Benjamin Hayes "Vandy" Vandervoort (March 3, 1917 − November 22, 1990) was an officer of the United States Army, who fought with distinction in World War II. He was twice awarded the Distinguished Service Cross. He was portrayed by John Wayne in the 1962 war film The Longest Day.Vandervoort transferred to the newly established paratroopers in the summer of 1940, and was promoted to first lieutenant on 10 October 1941. Promoted to captain on 3 August 1942, almost eight months after the American entry into World War II, he served as a company commander in the 505th Parachute Infantry Regiment (PIR), commanded by Colonel James M. Gavin. He was promoted to major on 28 April 1943,[2] a few weeks after the 505th had been assigned to the 82nd Airborne Division, then commanded by Major General Matthew Ridgway, and served as operations officer (S-3) in Colonel Reuben Tucker's 504th Parachute Regimental Combat Team in the Allied invasion of Sicily and in the landings at Salerno.Promoted to lieutenant colonel on 1 June 1944, he was the commanding officer of the 2nd Battalion, 505th PIR, during the American airborne landings in Normandy. Vandervoort led his battalion in defending the town of Sainte-Mère-Église on 6 June in "Mission Boston", despite having broken his ankle on landing. During "Operation Market Garden" in September 1944, he led the assault on the Waal Bridge at Nijmegen while the 3rd Battalion, 504th PIR, made the assault crossing. Ridgway described Vandervoort as "one of the bravest and toughest battle commanders I ever knew".At Goronne he was wounded by mortar fire, so was unable to take part in the 82nd Airborne Divisions' advance into Germany in 1945.He was promoted to colonel on 7 July 1946, and left the Army on 31 August. After studying at Ohio State University he joined the Foreign Service in 1947. He served as an executive officer in the Department of the Army in 1950-54, acting as joint political adviser to the commanding general United Nations forces and UN ambassador, Korea, in 1951-52, and studied at the Armed Forces Staff College (now the Joint Forces Staff College) in 1953. He served as a military attaché at the US embassy in Lisbon, Portugal, in 1955-58, and was assigned to the Department of State in 1958-60. He then served in the Executive Office of the Central Intelligence Agency (CIA), from 1960–66, also serving as a consultant on politico-military affairs to the US Army Staff in 1960, and as a plans and program officer on the Army Staff, Department of Defense, in 1964.Benjamin Vandervoort died on November 18, 1990 at the age of 73 years at a nursing home from the effects of a fall. He had two children with his wife Nedra; a son (Benjamin Hayes Vandervoort II) and a daughter (Marlin Vandervoort).Photo courtesy Michel DetrezD-Day Experience, Saint Côme du Mont