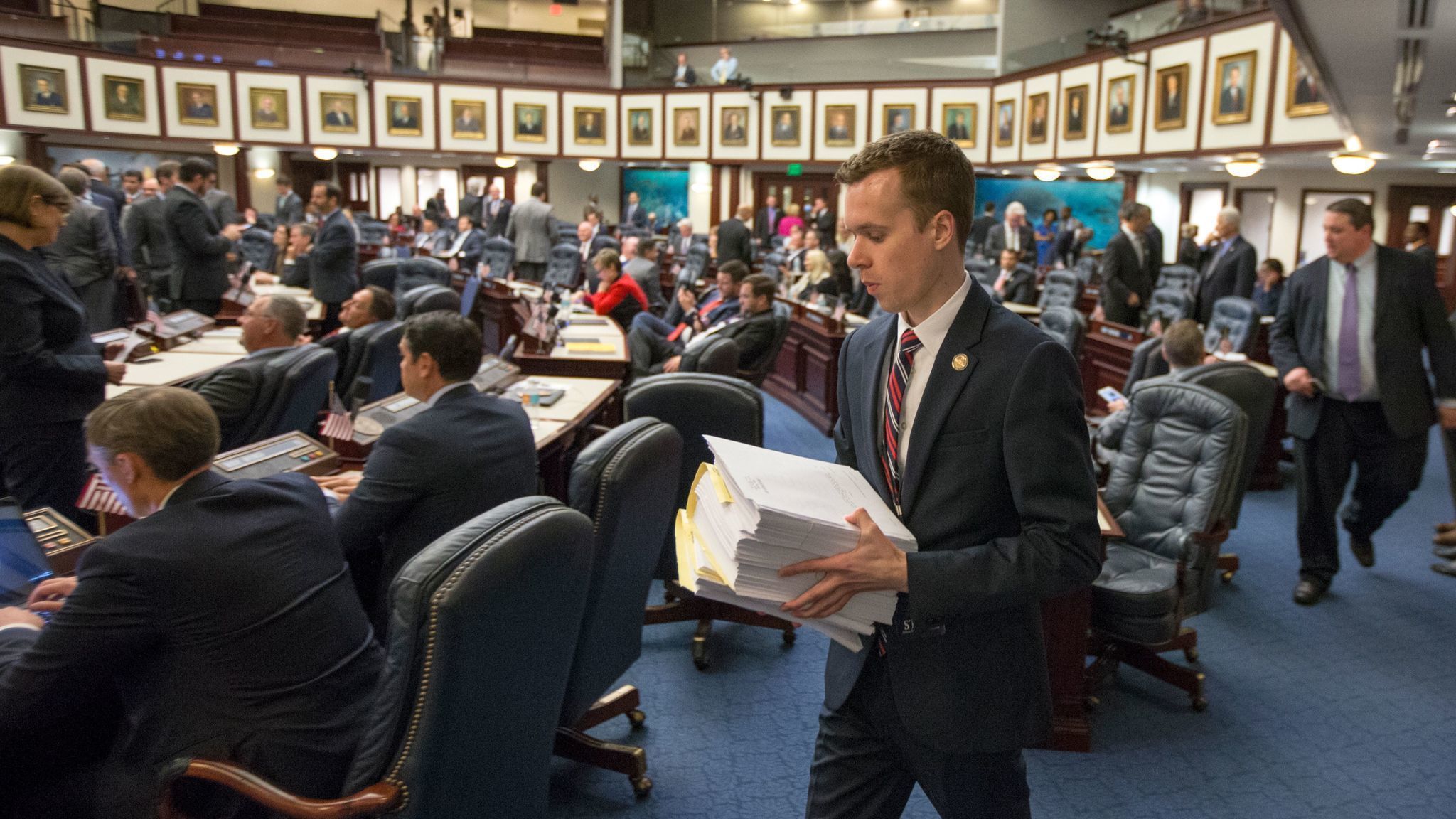 The final budget arrives in the Florida House of Representatives from the Senate late Monday, May 8, 2017, at the state Capitol in Tallahassee, Fla. (Mark Wallheiser / AP)

By Perry Thurston
The Florida Legislature shouldn't use the budget to undermine public schools and community colleges.

If you repeat a lie often enough, it becomes truth. Florida House Speaker Richard Corcoran did that and more during the 2017 legislative session. He wrapped himself in the flag of populism and sold the Legislature a bill of goods in a new and deplorable state budget.

Corcoran used the words “bold” and “transformative” to describe the new state spending plan, which goes into effect on July 1. Unfortunately, the new $82.4 billion budget:

Cuts $550 million from Medicaid, a program that provides health care to the poor, the elderly and many of the most vulnerable Floridians. Republicans in the Legislature are betting that a deal between Gov. Rick Scott and the Trump administration will produce enough federal money to offset the cuts. But who in their right man is betting on Washington these days?

Slices $25 million from Florida college system. The cut comes at a time when more adults are returning to college campuses for their initial education and retraining for today’s job market.

Offers a paltry $24 increase in per pupil spending in K-12 education, which for most urban school districts would force them to cut educational programs.

Robs $140 million from Florida’s public schools in the “Schools of Hope” program that offers incentives to attract privately run charter schools that can operate with little oversight or regulations.

Allow voters to cut state homestead exemption, which will save the average homeowner $275 but will reduce revenue for local governments and force them to cut staff and programs.

As lawmakers, we are sent to Tallahassee with only one job that’s mandated by the state Constitution: pass a balanced budget by the end of the annual 60-day legislative session. We barely did that, and it’s debatable if what we approved passes muster with our constituents.

The Florida Legislature shouldn’t use the budget to undermine public schools and community colleges, to carve out special deals for special interests or pick winners and losers in the property tax valuations so that a favored few will pay less taxes while a majority suffer from less services.

Yet, that’s what happened in Tallahassee, thanks to Speaker Corcoran who pushed dramatic policy changes into so-called “conforming bills” that are now hard-wired into the state budget. Give the Speaker credit. He held the session hostage until he received the Senate’s consent.

The “Schools of Hope” measure makes a mockery of open government. The measure, crafted behind closed doors, was sprung on the Senate in the closing days of the session and, since it was tethered to the budget, there were no opportunities to amend the legislation. Even the senator who presented the bill ultimately voted against his own bill, and I was happy to join him.

The new spending plan is now in the hands of Gov. Scott, who is no fan of Corcoran’s and has hinted that he might veto the whole budget and call lawmakers back to the capitol for a special session. I urge the governor to do just that. Florida can’t afford what the speaker is selling.

Perry Thurston, a Democrat from Ft. Lauderdale, represents District 33 and is Chairman of the Florida Legislative Black Caucus.
Posted by Ed Slavin at 8:11 AM