To survive, newspapers must emphasize investigative reporting. This week, The St. Augustine Record, to its credit, twice printed page one stories by The Washington Post Expect more miracles.. 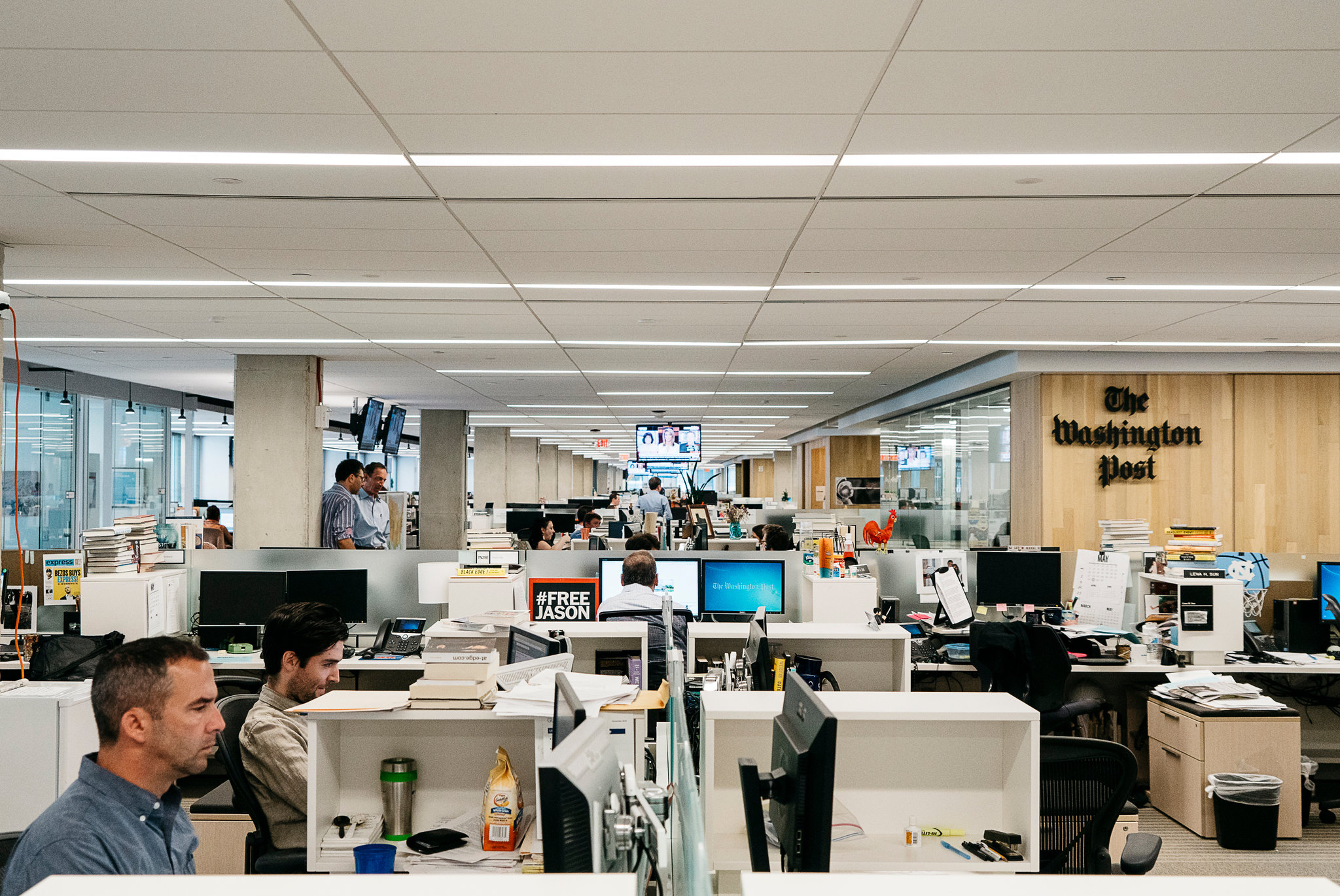 The newsroom of The Washington Post. Recent scoops about the administration have further enhanced what the news organization says is a highly successful strategy for impactful, profitable journalism in a digital age. Credit Justin T. Gellerson for The New York Times

Since The Washington Post’s Watergate-era glory days, my need to read that paper has waxed and waned. I already pay for and scour The New York Times (of course), The Wall Street Journal and The New Yorker, which is a lot to manage before I even get to the books on my night stand and Kindle. So I haven’t been looking for more to read, let alone another monthly expense.

But for some time, a Washington Post logo with the caption “Breaking News” has been popping onto my laptop’s screen. I’m not sure how The Post insinuated itself into my prime digital real estate, since I don’t recall inviting it there. And I’d probably find it annoying and intrusive if the breaking news weren’t so interesting.

That’s when I learned I’d bumped up against The Post’s pay barrier, along with the flattering observation that “You obviously love great journalism.” And for just 99 cents for the first four weeks and a few more clicks, I could keep reading. Who could resist?

I became a subscriber for the first time, and The Post had just monetized its scoop.

As a private company since 2013, when the deep-pocketed Amazon founder Jeff Bezos bought it for $250 million, The Post doesn’t disclose much financial data. But by all visible measures, including the vital but hard-to-measure buzz factor, the resurrection of The Post, both editorially and financially, in less than four years has been little short of astonishing.

The Post has said that it was profitable last year — and not through cost-cutting. On the contrary, under the newsroom leadership of Martin Baron, the former editor of The Boston Globe memorably portrayed in the film “Spotlight,” The Post has gone on a hiring spree. It has hired hundreds of reporters and editors and has more than tripled its technology staff.

Last month, according to figures from comScore, The Post had 78.7 million unique users and 811 million digital page views, trailing only CNN and The New York Times among news organizations.

“The published numbers speculating about our subscription and ad revenue have so underestimated the reality that it’s comical,” The Post’s chief revenue officer, Jed Hartman, told me this week. “Our digital ad revenue is in the solid nine figures,” that is, in excess of $100 million. This year, he added, “we’ll have our third straight year of double-digit revenue growth.”

Craig Huber, a veteran media and newspaper analyst and founder of Huber Research Partners, said that while he had not seen The Post’s data, the gains reported are striking. “I’m very, very surprised by those numbers,” he said. “No one else is even coming close. If that’s correct, I’m very impressed.”

To be sure, as with other newspapers, The Post’s economic picture is still encumbered by print, where declines in circulation and advertising revenue continue unabated. And its digital rebound has most likely come from a modest base.

But editorially, The Post’s recent scoops have often shaped the national conversation. David Fahrenthold won the Pulitzer Prize for national reporting this year for his series debunking President Trump’s claims to charitable contributions and for the biggest bombshell of the presidential campaign: the revelation of the “Access Hollywood” recording in which Mr. Trump boasted of groping women. (The Post was also a finalist for feature and editorial writing.)

It was The Post’s revelation that Michael T. Flynn had lied about his contacts with the Russians that cost him his job as national security adviser and plunged the White House into a continuing crisis over Mr. Trump’s attempts to limit the investigation into his administration’s ties to Russia. 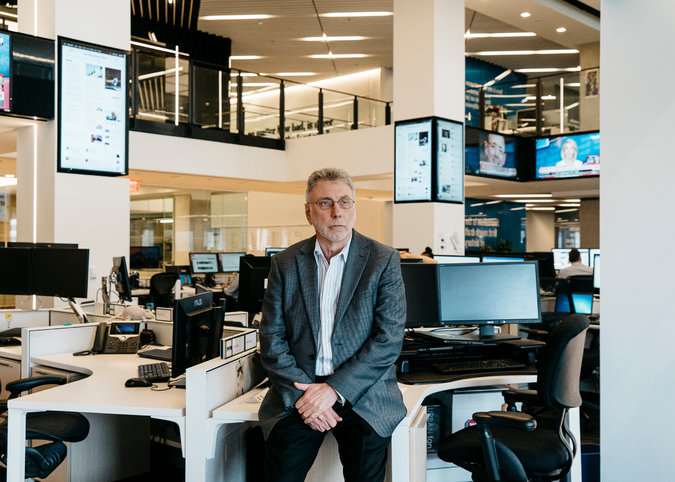 Martin Baron, executive editor of The Washington Post. Credit Justin T. Gellerson for The New York Times
(In an old-fashioned news-gathering war, The Times delivered the latest scoop on that front this week with a report that Mr. Trump had pressured James B. Comey, as director of the F.B.I., to drop the Flynn inquiry.)

Scoops — and high-quality journalism more generally — are integral to The Post’s business model at a time when the future of digital journalism seemed to be veering toward the lowest common denominator of exploding watermelons and stupid pet tricks.

“Investigative reporting is absolutely critical to our business model,” Mr. Baron told me. “We add value. We tell people what they didn’t already know. We hold government and powerful people and institutions accountable. This cannot happen without financial support. We’re at the point where the public realizes that and is willing to step up and support that work by buying subscriptions.”

He said digital subscriptions had soared this week in the wake of the latest Russia revelations, as they have with other scoops. In the first quarter of this year, The Post says, it added hundreds of thousands of new digital subscribers. (It would not disclose the overall number of subscribers.)

Investigative journalism also drives advertising, Mr. Hartman said. “It’s what elevates our brand,” he said. “And other brands want to attach themselves to a trusted brand.”

Mr. Huber, the analyst, concurred. “The only future for newspapers is at the high end of quality journalism,” he said. “That and only that are what people are willing to pay for.”

He said The Post was one of three newspapers, along with The Times and The Wall Street Journal, that are successfully transforming themselves. “They’re showing that a digital strategy is viable,” he said. “But the number of people willing to pay $10 to $12 a month for an online subscription outside those three is a rounding error.” (After the introductory rate, The Post’s digital-only access for national subscribers is $9.99 for four weeks.)

Mr. Huber noted that given the winner-take-all nature of the internet, the sources of scoops are gravitating toward just a few news outlets led by The Times and The Post. Sources (and people who want to “leak”) go to a publication with the most impact; opinion makers and influencers seek the publication with the most sources and scoops — hence the “network effect” so coveted in technology circles, and one well understood by Mr. Bezos.

When I asked Mr. Baron to name one thing that has driven the turnaround, his immediate answer was Mr. Bezos — and not because of his vast fortune.

“The most fundamental thing Jeff did was to change our strategy entirely,” Mr. Baron said. “We were a news organization that focused on the Washington region, so our vision was constrained. Jeff said from the start that wasn’t the right strategy. Our industry had suffered due to the internet, but the internet also brought gifts, and we should recognize that. It made distribution free, which gave us the opportunity to be a national and even international news organization, and we should recognize and take advantage of that.”

But Mr. Bezos also seems to be a hands-off owner: Although Mr. Baron said they typically have a teleconference call every two weeks, Mr. Bezos hadn’t called this week, even after the Russia scoop.

For many, this week’s avalanche of breaking news brought back vivid memories of Nixon and Watergate, “All the President’s Men,” and the Post reporters Woodward and Bernstein. But The Post’s current leadership is the first to admit that times have changed so vastly that such pre-internet comparisons are largely irrelevant.