On May 22, 2017, St. Augustine City Commissioners were treated to yet another rather pitiful display of incompetence by City Attorney ISABELLE CHRISTINE LOPEZ, including excessive deference to a corporate law firm.

The new owner of the Santa Maria Restaurant wants to know what the rules will be when it's demolished and rebuilt.  Fair enough.  Certain property rights are "vested" after 100 years.  But the attorney for the LLC that owns the restaurant provided nothing in writing to the Commissioners, and nothing in advance to City Attorney LOPEZ.  Nothing was in the agenda packet for Commissioners and the public.  One of the issues was that the restaurant could continue after it is rebuilt without any requirement for parking.

ROGERS TOWERS partner ELLEN AVERY SMITH spoke and listed seven items she wanted Commissioners to agree were vested rights.  Actually, there were eight -- Mayor Nancy Shaver can do math in her head, and she watches and listens.

Commissioners took no action.  But the item should never have been placed on the agenda.

Without advance review by the City Attorney, why was a corporate lawyer allowed to place an item on the agenda?

Worse, it was placed on the agenda without allowing public comment, as is the practice in this developer-dominated place, whose government is at times a disgrace to the human race. 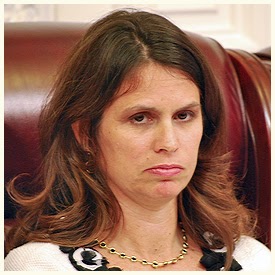 Worse still, controversial City Commissioner LEANNA SOPHIA AMARU FREEMAN, a divorce lawyer, actually intoned, "where are all the people" who opposed the San Marco Hotel earlier.  It was 8:30 PM.  Presumably, the residents all went home, having been kicked in the teeth by the Gang of Four, including FREEMAN, Vice Mayor TODD DAVID NEVILLE (a/k/a "ODD TODD) and compliant Commissioners Nancy Sikes Kline and Roxanne Horvath.

ROGERS TOWERS partner ELLEN AVERY SMITH has certain mediocre, mendacious, maladroit, pro-developer local government lawyers cowed.  Evidently, they want to work for a corporate law firm one day, presumably if they grow up.  Meanwhile, some maladroit local government lawyers practically gush over corporate law firm partners like witches in heat, as LOPEZ did with the late GEORGE MORRIS McCLURE, flirting with him.  It was LOPEZ who hugged ex-Mayor LEN WEEKS a/k/a "CLAUDE LEONARD WEEKS, JR." after he was fined only $3600 by the Code Enforcement Board for destroying 211-year old Don Pedro Fornells House at 62A Spanish Street on September 25, 2014, working without permits, at a time when he was the Chairman of the Historic Architectural Review Board.

Lower than a snake's belly in a wagon rut, ROGERS TOWERS' retainer agreements require that its clients agree to waive all conflicts of interest with any other clients, known or unknown, now and in the future.
Posted by Ed Slavin at 9:42 AM