All four of our federal representatives from St. Augustine voted against the infrastructure bill that President Biden will sign into law on Monday, November 15, 2021.

Thanks to St. Augustine Mayor Tracy Wilson Upchurch for publicly pointing that out that U.S. Reps. JOHN HENRY RUTHERFORD and  MICHAEL GEORGE GLEN WALTZ vote no.

So did Senators MARCO ANTONIO RUBIO and RICHARD LYNN SCOTT.

Four Dull Republicans voted against the infrastructure bill.  They are not on our side.

St. Augustine and St. Johns County face YUGE developer-created problems.  Faster than a speeding dump truck, our way of life is being destroyed by secretive, foreign-funded "developers" without a conscience. They don't give a fig about our flattened forests or declining qualify of life here in what we locals call "God's country,"

Developers in our town are responsible for deforestation, wetland filling and wildlife killing on a massive scale, with no state law requirements for Environmental Impact Statesments on government action, as provided in the National Environmental Policy Act and some 20 state "little NEPA" laws.

All four willful men voted against the very infrastructure bill that will start solving some of our problems.

Don't tell me these four fools are "pro-life!"

Our beloved historic St. Augustine Bridge of Lions was rated a 6 and was in danger of collapsing before it was replaced.  In Minneapolis, the bridge that collapsed in 2007 was rated a 51.

There but for the grace of God, one of us could have died on the Bridge of Lions, which Florida ME-publican politicians in Tallahassee let crumble to where its a single car or boat crash away from collapse.

People could have died here in St. Augustine due to Dull Republican Governors' neglect of public works. 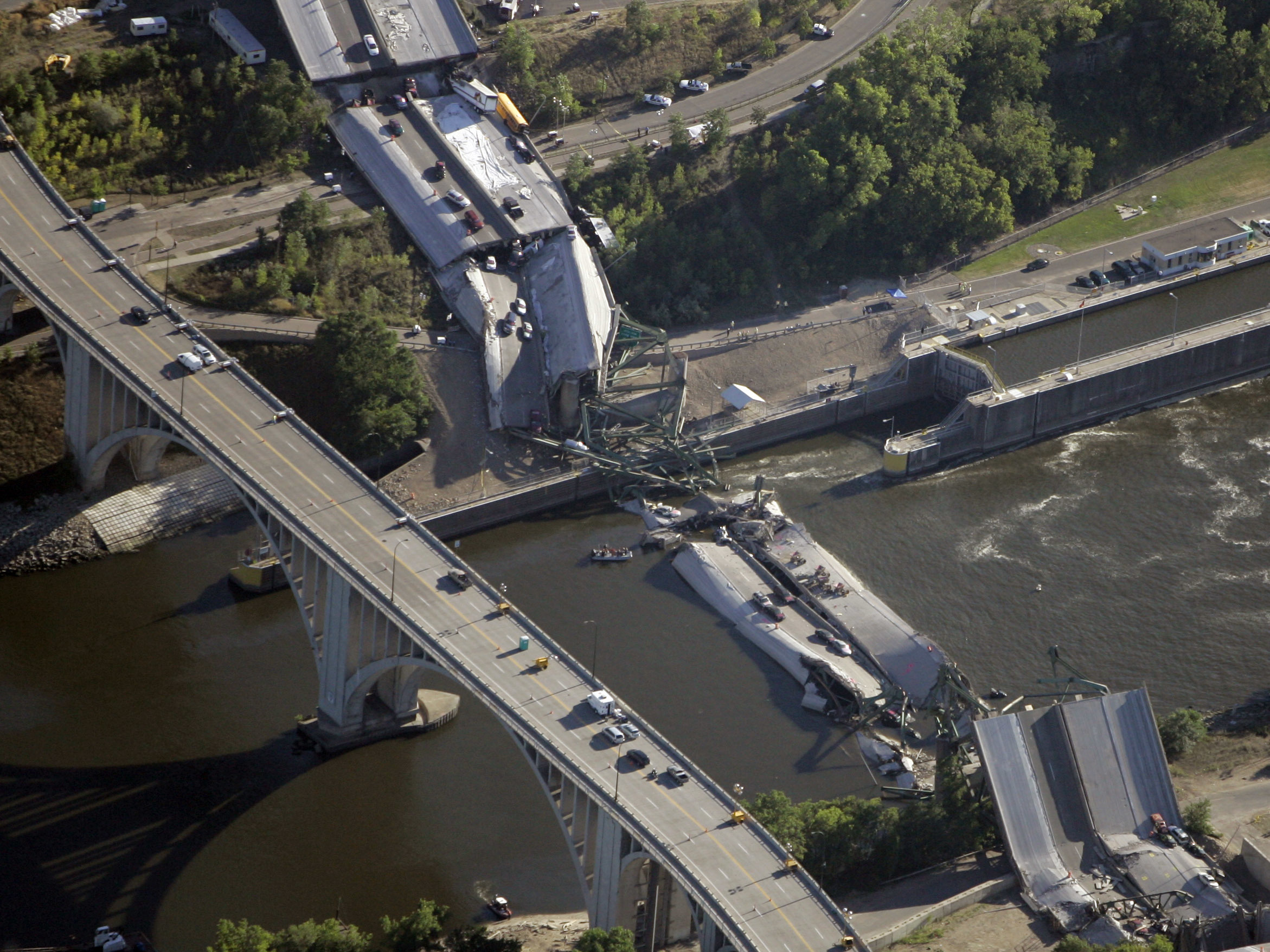 How the new infrastructure bill will boost Florida | Editorial

No thanks to the state’s Republicans, the Sunshine State will get much-needed money to fix its roads, bridges and much more.

This article represents the opinion of the Tampa Bay Times Editorial Board.

The $1.2 trillion bipartisan infrastructure bill is now headed to President Joe Biden’s desk, having passed the House late Friday night. “Infrastructure” isn’t a word that rolls easily off the tongue, but it’s not an abstraction. It’s real stuff: roads, bridges, airports, the electric power grid and, yes, internet service. And a lot of money is flowing to Florida.

For starters, the White House estimates that at least $13.1 billion is coming to the Sunshine State for roads over the next five years as well as $245 million to replace or repair bridges. And that’s a minimum. Not only do our roads need work, they need to be kept useable even as the seas rise and the climate changes. Florida is among the most vulnerable to the effects of climate change, so this news — and this spending — will be welcome. It also aims to make Florida safer for pedestrians and cyclists, which matters because the Sunshine State is already the most dangerous place to walk in the United States.

Although some wrongly claim otherwise, high-speed internet is “infrastructure,” too. And this bill will allocate at least $100 million to help provide broadband coverage across Florida. That will be good news to the more than 700,000 Floridians who don’t have it. For both educational and business purposes, broadband internet is a basic necessity. In 2021, making it available is akin to the great federal rural electrification programs of nearly a century ago. It levels the playing field and means that even those outside metro areas will have a chance to compete. In addition, according to the White House, nearly 6.5 million Floridians — roughly a third of the state — will be eligible for an Affordability Connectivity Benefit, which will help low-income families pay for internet access.

Florida is also slated to receive approximately $1.2 billion for airport improvements over five years, which could possibly include a new air traffic control tower at Tampa International Airport, one of the oldest in the country.

While this is a bipartisan bill, it was strictly partisan business as usual in Florida, sadly. When the Senate approved the bill back in August, Florida Republican Sens. Marco Rubio and Rick Scott both voted “no.” Scott complained that “the Democrats want to spend all the money, but they don’t want to take responsibility for the debt.” That vote was 69-30 with even Sen. Mitch McConnell of Kentucky, the Republican leader, joining 18 Republicans to say yes. But not our Florida senators.

As for the House late Friday night, 13 Republicans — none from Florida — joined with Democrats to pass the bill 228-206. Eight of those Republicans are members of the so-called Problem Solvers Caucus, a bipartisan group of centrists who try to find common ground and get things done.

Tampa Bay’s Republican naysayers — Daniel Webster, Clermont; Gus Bilirakis, Palm Harbor; Scott Franklin, Dover; and Vern Buchanan, Sarasota — were in the odd position of joining with the six Democrats who voted against the bill, the left-wing progressives who make up The Squad, whose most famous member is Rep. Alexandria Ocasio-Cortez, D-N.Y. The Squad balked because they wanted to use the infrastructure bill as leverage to pass an even bigger social safety net and climate change bill, which is still pending. What is the Republicans’ excuse?

While the non-partisan Congressional Budget Office has estimated that the infrastructure bill would add $256 billion to the debt over the next decade, the bill will provide the means to repair and build the roads, bridges, ports, airports and broadband internet that will help to expand commerce and make American businesses competitive. Sometimes, it takes money to make money, and the bill will finance actual things that will have tangible effects on Floridians, which is why Tampa Bay Democrats Charlie Crist of St. Petersburg and Kathy Castor of Tampa voted yes.

So when those things actually get built in Florida, those who voted “no” should not go anywhere near a ribbon-cutting. They may argue that the investments are too expensive. The reality? It’s too costly to Florida’s future not to make them.

Editorials are the institutional voice of the Tampa Bay Times. The members of the Editorial Board are Editor of Editorials Graham Brink, Sherri Day, Sebastian Dortch, John Hill, Jim Verhulst and Chairman and CEO Paul Tash.