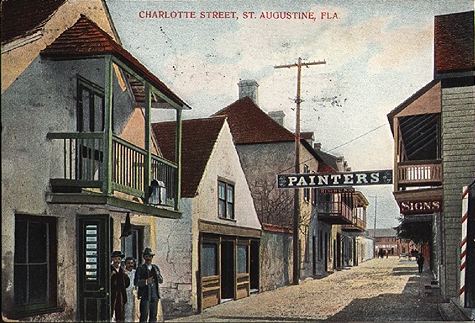 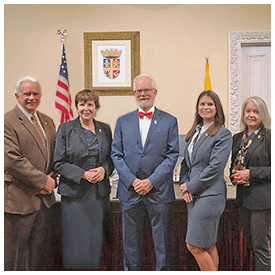 Dead human bodies were disturbed in the City of St. Augustine last month.

Thanks to former City Archaeologist Carl Halbirt for raising the alarm to City Commission September 9, the day after the founding of the City of St. Augustine 454 years ago.  After winning the City's highest award after his retirement, Mr. Halbirt came back to report his concerns, citing to Florida Statute 872 and using the word "felony."

Once called "The Minister of Propaganda" by a former City Attorney, John Patrick Regan, P.E., our City Manager, at first seemed more concerned about public relations than truth, avoiding and evading efforts to learn what the City's water utility contractor did and why.

Felony crimes, torts or contract violations may have been committed, but there are apparently no civil or criminal investigations, yet.  There may be a coverup.

This may be the worst environmental violation by the City since it dumped a landfill in a lake in 2005-2006: we caught them then and we're exposing them now.

After 1702, when the British burned the City to the ground, the church moved. The bodies remained.  Then, the 1573 City Plan was modified, without notifying the Spanish King, extending Charlotte Street to King Street, over top of the bodies.  Buildings were built.  Time forgot them, until road and pipe work during Henry Flagler's

The  bodies of St. Augustine's first European and first African residents are now underneath Charlotte Street and adjoining buildings, including the A1A Aleworks buildings at King and Charlotte Street, which allowed then City Archaeologist, Mr. Carl Halbirt, and retired UF Archaeologist Dr. Kathleen Deagan to explore after Hurricane Matthew.  Here they are, to the right: 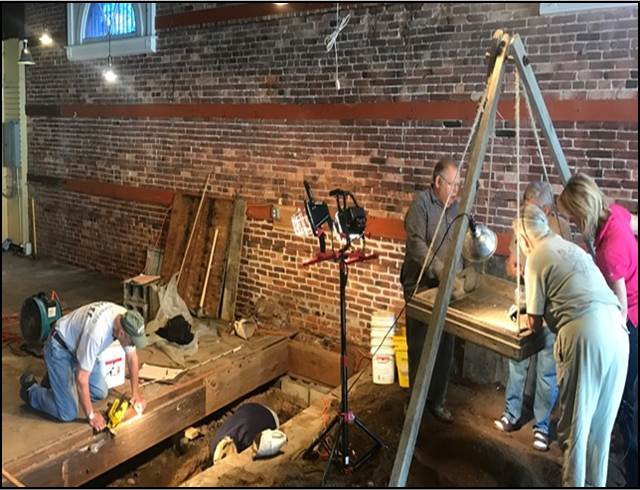 When Charlotte Street's ancient pipes were being replaced, bodies were found, and an agreement was made between the City and Church on archaeological preservation and respect for the dead.

Then, almost 454 years to the day that St. Augustine was sighted and named by the Spanish in 1565, a City contractor, G & H Underground Construction, Inc., with a history of OSHA fines totaling $31,592 in 2018 for "serious" and "willful" violations allegedly violated its instructions.  Or did City managers authorize it to do what it did?

We don't know yet.

Roman Catholic Church concerned: On September 17, I spoken with Ms. Ellen Avery-Smith, RogersTowers law firm, who tells me that her client, the Cathedral-Basilica of St. Augustine, is concerned and waiting, as am I, for truthful, candid answer.  I have shared my e-mails with Ms. Smith, Roman Catholic Church officials, and the Papal Nuncio (Ambassador from the Vatican) in Washington, D.C.

What's next: The issue will be on the City's agenda on Monday, September 23, 2019 at 5 PM.  Come speak out in favor of a stronger archaeological ordinance, with stronger penalties.

Coverup ongoing?: Is someone in City Hall is apparently pressuring Dr. Andrea White, Ph.D. to trim her sails and not speak the whole truth?  Her testimony, and those of other witnesses, needs to be under oath.

Whistleblower protection needed; City and contractor employees must be protected from retaliation with a strong local whistleblower ordinance, which I have been advocating since 2006.

In 2006, the City dumped a landfill in a lake and City Commissioners promised their fealty and undying loyalty to City Manager WILLIAM BARRY HARRISS in the midst of pending federal and state environmental crimes investigations. This chilled cooperation with federal and state investigators, and helped HARRISS avoid prosecution.

Structural reforms needed:  The City Archaeologist and other environmental regulatory personnel need to be in a separate department, not reporting to the Director of Building and Planning, David Birchim, who functions as a cat's paws for developers.  I've proposed a Department of Environment, Safety, Health and Archaeology (ESHA)

City Archaeologist Dr. Andrea White has not yet responded to a telephone message left last week.  I am waiting for a substantive discussion with City Manager John Patrick Regan, P.E.,who appears especially evasive and anxious on the City's contractor disturbing dead human bodies on Charlotte Street, locus in the 16th century of the very first parish church in what is now the United States.

But there is a major discrepancy, a material alteration, if not falsification, between the candid report that Dr. White provided to State of Florida history officials on August 28, 2019 and the self-serving City defending memo that is being presented in her name at the Monday, September 23, 2019 City Commission meeting.

Here's my September 22, 2019 e-mail requesting some of the pertinent records.

2. Specifically, I am wondering about words that do not show up in the September 23, 2019 document:
From August 28 memo:
From September 23, 2019 memo:
3. The second version omits the fact that G & H Underground Construction worked without archaeological supervision and worked below two feet.
4. Who edited, altered and censored Dr. Andrea White's August 28, 2019 memo to make her chronology incomplete in the September 23, 2019 version?  Why?
5. Please provide all versions of both memos, and intermediate memos, bearing edits, including metadata.
6. Please provide copies of the relevant appointment calendars establishing with whom Dr. White met and spoke, August 28-date, on the Charlotte Street project.
7. No more coverups, please.  Scientific integrity must be protected and encourged.
Thank you.
With kindest regards, I am,

Here is the full text of the memo from Dr. Andrea White, dated September 23, 2019 (tomorrow), included in Commissioners' packets:

MEMORANDUM
City of St. Augustine
To: John P. Regan, P.E. City Manager
DATE: September 23, 2019RE: Charlotte Street and compliance with Section 872.05, Florida Statutes
Starting in 2016, the City of St. Augustine Archaeology Program has been conducting archaeological investigations in support of the Charlotte Street Utility Improvement Project. During this archaeological work, numerous burials were encountered that are associated with the first parish church in St. Augustine, Nuestra Senora de los Remedios (ca. 1574 to 1702). Section 872.05, Florida Statutes is the section of law concerning unmarked burials and stipulates it is a third-degree felony if a person willfully and knowingly disturbs unmarked burials. Equally important, the law outlines the protocols for the discovery ofhuman burials, especially in an archaeological context such as Los Remedios. As part of the City Archaeologist's duties, both former City Archaeologist Carl Halbirt and myself have assisted the City's observance of this law and ensured the respectful treatment of the deceased. Since 2017,therehavebeen established protocols created in full coordination with the State Archaeologist, the designated descendant representatives-the Cathedral Basilica of St. Augustine, and other esteemed community members and scholars. Below is a synopsis of events related to the project and coordination efforts made with the State Archaeologist to ensure City compliance with Section 872.05, Florida Statutes.