Not one Commissioner bothered to ask tough questions of City Manager JOHN PATRICK REGAN, P.E. or his pal, Public Works Director MICHAEL CULLUM about their directing a city contractor to work without archaeological supervision on the night of Sunday, August 25-26, disturbing the bones of some of St. Augustine's earliest residents under Charlotte Street, disturbing the site of the first parish church in America, Nuestra Senora de Los Remedios.

Thanks to former City Archaeologist Carl Halbirt for blowing the whistle.

No thanks to City officials who tried to "manage" the truth told by City Archaeologist Dr. Andrea White, Ph.D.

No thanks to the Mayor Tracy Upchurch who refused to honor my request to speak and ask questions, stating "this is not a public hearing!"

No thanks to the Gang of Four, those other-directed supercilious City Commissioners, whose main concern was on money-making for merchants.  Putative history maven Nancy Sikes-Kline showed her shrieking shallowness when she rushed the archaeological investigation, wanting it to be complete by the commencement of Nights of Lights.

As criminologist Edward Alvord Ross wrote of corporate white collar criminals in 1907, the City was in a hurry.

Then St. Augustine Police Chief Barry Fox, a/k/a "Barney Fife," asked Dr. White to step aside and talk to him.

Not only was there no criminal referrals of any City manager for the disturbance of human burials -- a violation of F.S. 872 -- but Chief Fox appears to be in one the coverup, escorting Dr. White away from TV news crew questions.

I have told the City Manager that if he won't do a referral for criminal investigation, I will.  The wrongdoers may be both him and the Public Works Director, his pal, MICHAEL CULLUJM. 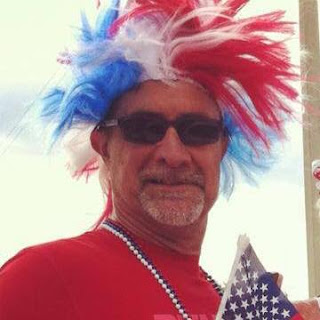 As part of a utility project on Charlotte Street, where centuries old human remains have been found, crews dug into the street in August without oversight by the city’s archaeology department.

City Manager John Regan said Tuesday that public works officials thought the area had already been investigated and cleared for the contractor to work. Ideally, that type of work would have archaeological oversight, he said.

City Archaeologist Andrea White told commissioners this week that her crews plan to see if there were any impacts to archaeological resources.

Utility work on Charlotte Street resumed in August after a nine-month delay, according to a memo from White. The work has been monitored by the archaeology department.

But one night of work was done to tie a new water line into an old water line, and that wasn’t monitored by the archaeology program, she said.

Regan said the contractor, G&H Underground Construction, was authorized to work that night and the city had a construction inspector there.

“I just want to make sure that you knew it wasn’t the contractor doing something ... that we weren’t aware (of),” he said. “The amount of area on that one night that is in question is relatively small. In that excavation, people didn’t see human remains, but nonetheless we are doing a full review, and we’ll make sure that everyone has a better communications plan so there is no slippage on notifying the archaeologist.”

Since the utility work has started up, crews have found new human remains.

As is protocol when remains are found, crews stopped working and contacted the state archaeologist, White said. White and her team plan to document and record the area where remains were exposed.


Burials found in the area have been connected to Nuestra Senora de los Remedios, the first parish church of St. Augustine. The Catholic church existed from the 1570s to 1702 in that area where Charlotte Street connects with King Street.

The city has discovered remains multiple times as part of utility work on Charlotte Street over the past few years.

As in the past, the city has been working with officials from the state archaeology office and the Cathedral-Basilica — Los Remedios was a Catholic church — to coordinate a plan for the human remains, White said.

“All of this has been done ...following the statues,” she said.

Also, an abandoned utility line needs to be removed to keep the new roadbed from slumping, according to an email from White. When the crews come in to till the road, if the pipe remains equipment could hit the pipe, Regan said. The pipe has also caused sinkholes that have partially swallowed vehicles, Regan said.

White’s team plans to take a closer look at the pipe and have another conference with state and local officials to discuss next steps, White said.
Posted by Ed Slavin at 8:00 AM