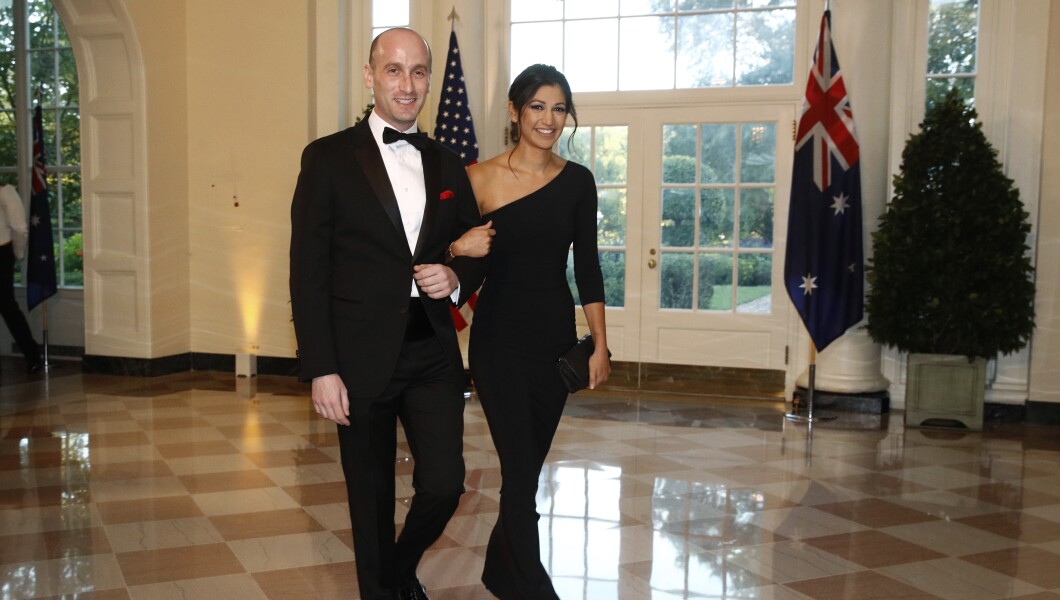 Sounds like the University of Southern California student politicians who went on to plot Watergae and its coverup under RICHARD NIXON.  Thanks to UF Independent Alligator's former editor Kathryn Varn for blowing the whistle on corrupt student politics at UF.

Waldman is a vigorous defender of TRUMP's family separation policy and border inanity.

There's more: kookie Katie Waldman is the girlfriend of senior presidential policy advisor Stephen Miller, who said famously in 2017 that Herr TRUMP's edicts on  national security "will not be questioned."

Arrogant apparatchiks in love.  How revolting.

If college is a training ground for the real world, an interesting case study is that of Katie Waldman — the University of Florida alumna named this week as Vice President Mike Pence’s press secretary.

Political journalists were quick to point out that Waldman, 27, was a spokesperson for the U.S. Department of Homeland Security, who had defended the agency’s divisive immigrant family separation policy. Some added that she was apparently dating Stephen Miller, a key adviser to President Donald Trump and a main proponent of the border wall.

Nick Miroff
✔
@NickMiroff
Pence has hired Katie Waldman, 27, to be his new press secretary, per NBC. She was a spokesperson for DHS under Nielsen, then comms director for Sen McSally. Also worth noting: Waldman is dating Stephen Miller https://www.nbcnews.com/politics/meet-the-press/live-blog/meet-press-blog-latest-news-analysis-data-driving-political-discussion-n988541/ncrd1056181 …

6,377 people are talking about this

Publications also noted the inevitable Florida connection. More than seven years ago, Waldman was in student government at the University of Florida when she became involved in an incident that would help define her time there.

It started with the publication of the Feb. 20, 2012 edition of the university’s independent student-run newspaper, The Independent Florida Alligator. It included an article reporting then-football coach Will Muschamp had endorsed a Waldman rival, a walk-on player who was running for student body vice president. Waldman was one of two students spotted discarding copies of that day’s Alligator.

I was a freshman journalism major then, trying to get my foot in the door at the Alligator, which is widely known as the place to be if you’re trying to work in traditional media. It was shocking to me at the time, but, looking back, it’s not that surprising in the context of UF’s student government.

Campus politics in Gainesville have long been controlled by a powerful few with the help of a voting bloc made up of social sororities and fraternities. Much of the power-brokering occurs in a highly selective organization called Florida Blue Key that includes a long list of former governors, senators, football stars and current VIPs, such as Sen. Marco Rubio, Attorney General Ashley Moody and Commissioner of Agriculture Nikki Fried.


The ruling party has taken on many names over the years. It was once “Gator,” then “Unite” during the paper-tossing scandal, then rebranded “Swamp” when I was editor-in-chief of the newspaper. But the tactics have stayed largely the same.

A 2013 email from a Swamp party senator asked sorority and fraternity representatives to collect “I voted” stickers from members and donate $250 to the party. In the last line, she asked them to delete the email after reading it, adding that it was “sketchy, but do it.” The student was appointed a student senator the next month.

And then there was Feb. 20, 2012. Waldman was seen with fellow student Jason Tiemeier when he tossed copies of the Alligator in the garbage. Waldman, a Unite student senator at the time, denied that she threw away any papers and said she advised Tiemeier against it. At the same senate meeting she offered the denial, she was named chair of the senate’s appropriations committee.

Tiemeier, also a Unite senator at the time, first denied the allegations then penned an apology letter in the Alligator, naming Waldman as his accomplice.

“When Katie Waldman and I were walking around campus, I let my sense of competition get in the way of the integrity and everything I believe I have always striven for in my time at UF," he wrote.

Tiemeier, who now works as a transaction tax associate for Ernst & Young in New York City, declined to comment Friday. Waldman couldn’t be reached for comment.

Waldman’s appointment sparked chatter among my UF friends, Alligator alums and not. On Facebook, my former Alligator colleague Meredith Bauer, who worked as metro editor during the newspaper-tossing scandal, nailed why the actions of student politicians matter.

Kathryn Varn is a former editor-in-chief of The Independent Florida Alligator and graduated from the University of Florida in 2015.