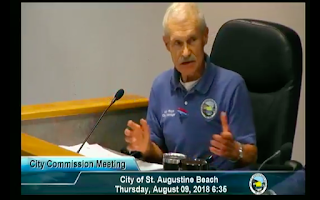 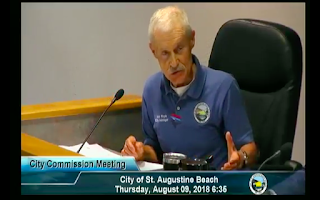 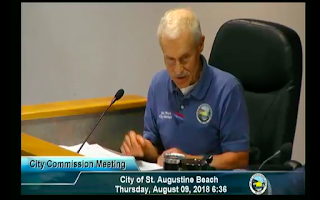 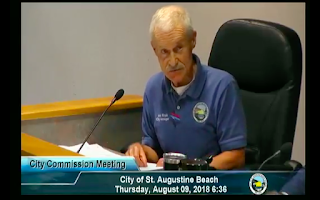 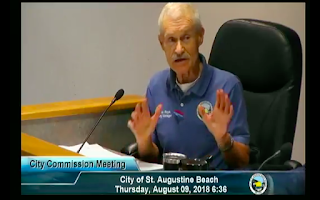 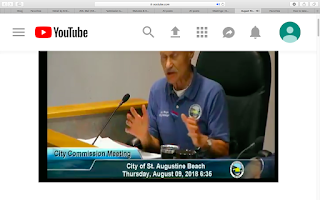 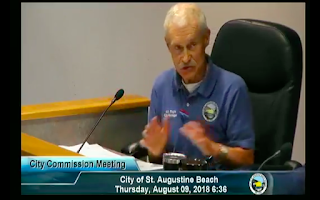 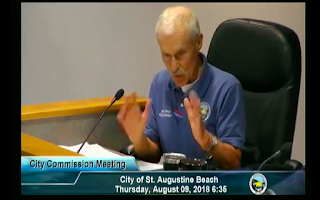 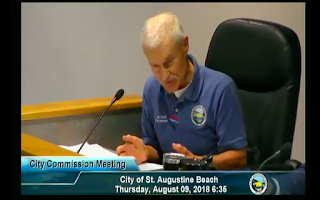 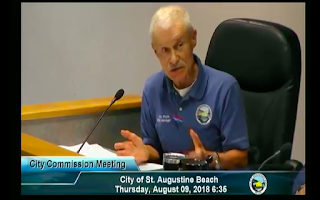 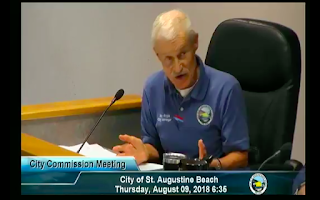 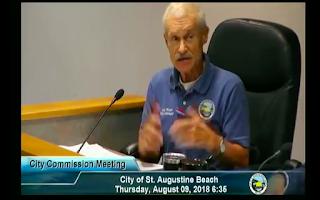 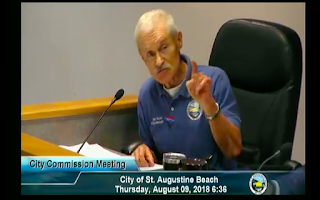 The vote was 4-0. No raise for incompetent, ineffectual, uninformed, unenlightened, sleepy, bigoted BRUCE MAX ROYLE, who has encumbered the position of St. Augustine Beach City "Manager" for some thirty (30) years. It is a vote of no confidence.

No confidence in tolerating sexual harassment and a hostile work environment.

No confidence in not getting insurance for the City's weir.

No confidence in tolerating embezzlement from Beach Blast Off!

No confidence in not being proactive or learning of new legislation.

No confidence in repeatedly scheduling meetings to conflict with other government meetings, as the vicious varment ROYLE did for BOTH FY 2020 budget meetings this month.

The vote to delete ROYLE's proposed raise was 4-0.

Commissioners finalized the millage at 2.3992, down from the tentative rate of 2.5. The debt millage also stayed the same at 0.5 mills to pay back the cost of purchasing Ocean Hammock Park to save it from development.

In order to get the millage rate down, some much-needed capital projects had to be cut from the budget. The police department not get new laptops, which will save the city $35,000. Commissioners also decided to delay the A Street sidewalk and drainage project — a cost of $60,000 — to pursue other funding options. Additionally, a city employee will be absent for half of the next year, so that saves around $33,000 in wages.

Hoping to save money wherever they can, commissioners decided not to give the city manager his raise of $2,400, and Commissioner Maggie Kostka offered half of her salary to be earmarked specifically for public works projects. It’s only around $3,000, but that will cover some paving projects that were cut from the budget.

“That is the department that has the most need and has been neglected the most, so that’s where I would like that money to go,” Kostka said. “I feel like it’s the right thing to do, and this is a time where we really need to focus on what we can to make the cuts, to make this budget work, instead of putting the burden on our community, which have very little to do with all these increasing costs.”

Despite the rate staying the same, property owners will still be paying more taxes as home values go up. The rate of 2.3992 is a 5.72% increase over the rollback rate of 2.264, or the rate needed to bring in the same amount of revenue as last year.

Commissioner Margaret England expressed concerns that the city isn’t investing in technology and public works as much as they should. She voted to keep the millage the same but suggested prioritizing those things in the future.

“If you keep the millage the same you get by, but that’s all you’re doing is getting by,” England said.

With St. Johns County facing a $15.5 million surplus in its budget for next year, St. Augustine Beach officials are hoping to get some of that money to fund capital projects.

At Monday’s meeting, commissioners discussed which projects to ask the county to fund and settled on pedestrian-activated signals at certain intersections along A1A, restrooms at Ocean Hammock Park, the A Street sidewalk and drainage project, a shade structure for the Splash Park, paving and drainage improvements on the west side of A1A Beach Boulevard between A Street and 1st Street and a parking lot at Hammock Dunes Park.
Posted by Ed Slavin at 11:21 PM