Letter to the Democratic Establishment: 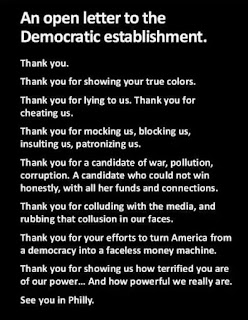 Hillary is great..smart woman and I love her husband! Sanders is a bitter old man who would have bankrupted our country...btw he lost BY MILLIONS of votes. Millions and Millions ..GO HILLARY..Go GAL...this is great!!

Boo on Sanders...bad voting record too

From Jan 2007 to Jun 2016, Sanders missed 198 of 2,932 roll call votes, which is 6.8%. This is much worse than the median of 1.6% among the lifetime records of senators currently serving. The chart below reports missed votes over time.

There is nothng to see in Philly...Sanders lost fair and square..by millions of votes. I know that bernie can't count very well as evidenced by his looney tunes budget estimqtes in regards to all his neato ideas ( yes, I do like some of his ideas but hey you gotta pay for them ..duh).

While we can give Bernie a pass because he is old it is sad that some of his supporters also lack basic math skills after they use all their fingers and toes...lets try this again..Hillary won ...by a landslide.MILLIONS...yes that is many fingers and toes for you...:)

What do I hae to be angery about...my lady won...your the one on the losing side not me pal

You are guilty of projection and attempted intimidation, Clinton troll. Troll elsewhere.