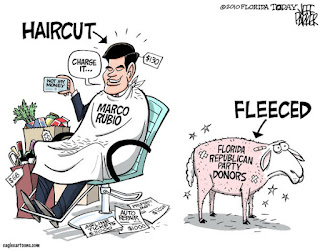 Another good editorial. Keep up the good work.

Marco Rubio is running for re-election to the U.S. Senate.

What now? Its’ not just about Rubio anymore, but the house of political cards that may crash down around — and under — the weight of his candidacy.

Immediately Florida’s Lt. Gov. Carlos Lopez-Cantera stepped aside from his run at the seat. Congressman David Jolly bowed out last week amid rumors of Rubio’s return. Rep. Ron DeSantis’ office told news sources Wednesday morning that he would be making a statement on his plans, perhaps today.

The announcement could cause a cascade effect the likes of what local voters saw when Sen. John Thrasher exited his Senate race to take over the helm of Florida State University. Both our St. Johns County sitting representatives, Travis Hutson and Doc Renuart, vacated their seats to run. This opened up those seats in a special election to Reps. Cyndi Stevenson and Paul Renner.

Here’s what Tallahassee insiders say is the likely fallout of Rubio’s return. First, DeSantis will exit the Senate race. His ultimate goal is Florida attorney general. He’ll announce for the District 6 Congressional House seat. Conventional wisdom says his demographics would play better in the northern District 4. Remember, the courts split St. Johns County in two during the last round of reapportionment. DeSantis has an advantage up there because of the weight of the military.

But former Duval County Sheriff John Rutherford is a tough opponent. DeSantis may be making a deal to leave that seat alone in order to tie up Republican support in the AG bid down the road. St. Johns County Commissioner Bill McClure is also in that race — for now.

DeSantis will qualify in our southern District 6, which runs from about Dondanville Road west to the county line. It takes in Flagler and parts of Volusia County as well. DeSantis isn’t as strong there and faces competition from Volusia County candidates. But DeSantis has $3.2 million in campaign funds in pocket. Few, if any, of the announced frontrunners will challenge him. With DeSantis running to the south and Rutherford in the north, we’ll see several hopefuls backing off before the qualifying deadline Friday. Many will be backtracking to qualify for their seats in the Florida Legislature.

And some of the candidates who were preparing to challenge for the open legislative seats will move back into their places as county and city elected officials — or at least four more years of political obscurity. For instance, McClure may re-enter the race for the District 3 County Commission seat against challengers Jerry Cameron, Paul Waldron and Sheamus John McNeeley. Pretenders topple all way down.

As far as Rubio’s promise not to seek re-election, his turnaround won’t be news 24 hours from now. It’s politics as usual.

If we called for censure of every candidate who flip-flops on campaign promises, we wouldn’t have anyone to vote for in the presidential elections in November.

Come to think about it, we might be better off.

COMMENT
TomFuller 06/25/16 - 08:55 am 00Return of the liar.
Failure after failure sends Rubio "the king of liars" back to his old stomping grounds. Money and political corruption rule in Florida and is the perfect place for these state and federal criminals to hold court. Rubio will be back in his comfort zone with a criminal governor and his gangster "the Trump squeezing" attorney general Pamala Bondi.

Little Marco and fellow failed politicians like Sarah Palin are best at lingering like a bad fart. Please, just go away and disappear.