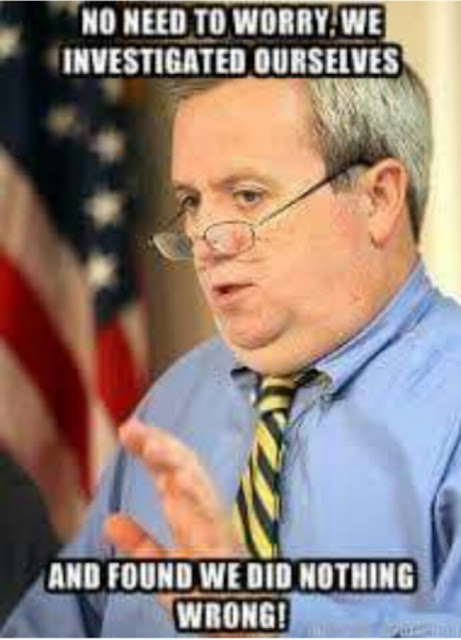 
From: Ed Slavin
BID PROTEST AND REQUEST FOR SUSPENSION AND DEBARMENT INVESTIGATION

1. I respectfully request that our U.S. Department of Justice Office of Inspector General (USDOJ OIG) and Government Accountability Office (GAO) jointly investigate and swiftly enjoin, investigate, hold hearings, review and reverse and declare void the August 6, 2019 St. Johns County (Florida) Board of County Commissioners Resolution 2019-247, adopting Memorandum of Understanding with Rachel L. Rojas, FBI Special Agent in Charge, Jacksonville, Florida, and affirming previously undisclosed July 26, 2018 Memorandum of Understanding between Charles P. Spencer, FBI Special Agent in Charge, Jacksonville, Florida, signed by Sheriff DAVID SHOAR on July 31, 2018, providing for up to $2 million in FBI funds for gun shooting range for Daytona, Gainesville and Jacksonville FBI agents.  ("The MOUs.").  Before August 6, 2019, Sheriff SHOAR was, at best, uncandid about his proposed financial relationship with FBI, claiming to have a "$2 million check," failing to produce it and failing to provide a copy of the 2018 MOU to me or to the St. Johns County Board of County Commissioners until August 2019.The August 6, 2019 MOU admits the illegality of the July 31, 2018 MOU, stating "because the County is responsible for construction and ownership of the facility, the SJCSO and the FBI recognize the need for the County to have been included as a party to the MOU."  The August 6, 2019 MOU was not on the published Board of County Commissioners agenda.  It was abruptly added to the August 6, 2019 agenda when the meeting commenced, failing to give interested parties an opportunity to speak to the MOUs.  (When I asked to see a copy of the MOUs, St. Johns County Attorney Patrick Francis McCormack tried to snatch back the documents in quo while I was still reading them.)

2. Please conduct a suspension and debarment investigation of the Respondent St. Johns County Sheriff's Office on the grounds of Sheriff DAVID SHOAR's material false statements to FBI on the Michelle O'Connell case and the $702,773+ embezzlement by the Sheriff's Finance Director, 2011-2018.   Respondent St. Johns County's incurious longtime auditors were opaque about this embezzlement, demurely writing in footnote 19 of the FY 2018 CAFIR:

3. The MOUs create an Organizational Conflict of Interest (OCI) and give the Respondent St. Johns County Sheriff's Office an unfair competitive advantage, abusing a cooperative agreement as a means of perpetrating a de facto no-bid contract.  I hereby protest that de facto no bid-contract.
4. Under the Competition in Contracting Act of 1984 (CICA) and Bid Protest Regulations, GAO reviews protests concerning alleged violations of procurement statutes or regulations by federal agencies in the award or proposed award of contracts for the procurement of goods and services, and solicitations leading to such awards. See 31 U.S.C. §§ 3551(1), 3552; 4 C.F.R. § 21.1(a).
5.  Please investigate and report: do the MOUs require FBI agents travel far from Daytona, Gainesville and Jacksonville offices:
6. RESPONDENT ST. JOHNS COUNTY SHERIFF's OFFICE IS UNWORTHY OF AN FBI COOPERATIVE AGREEMENT AND SHOULD BE SUSPENDED AND DEBARRED FROM FEDERAL GOVERNMENT CONTRACTS.  Under suzerainty of incumbent Sheriff DAVID SHOAR, St. Johns County Sheriff's Office is a crime scene, as established beyond peradventure by:
7.  FBI had an ongoing corruption investigation of the St. Johns County Sheriff's Office, with Special Agent David Brown interviewing witnesses.  Whatever happened to that investigation?  Please investigate. Then the FBI entered into an irregular, unpublicized MOU with the Respondent St. Johns County Sheriff, illegally, without approval by the St. Johns County Board of County Commissioners.   The FBI's procurement of a gun shooting range should have been offered to other organizations, public and private, including St. Johns River State College, the University of Florida, and others.  It is illegal to use a "cooperative agreement" as a means of suppressing competition in the provision of goods and services to our federal government:

Based on these facts, we are inclined to view OPM's arrangement with CSS as an acquisition of CSS's services in support of OPM's statutory obligations. In analogous cases, we have viewed such arrangements as procurements. For example, in New York Telephone Company et al., 69 Comp.Gen. 61 (1989), 89-2 CPD Para. 435, we held that the General Services Administration's (GSA) grant of licenses covering the furnishing, installation, maintenance, and operation of public pay phones on GSA-controlled property was a procurement of property or services. We noted that GSA had a responsibility to arrange for telephone services for the private use of federal employees and for the use of the visiting public in GSA-controlled buildings. We concluded that because the acquisition thus satisfied GSA's specific needs, it constituted a procurement for services for the purposes of our bid protest jurisdiction.
Similarly, in West Coast Copy, Inc.; Pacific Photocopy and Research Services, B-254044; B-254044.2, Nov. 16, 1993, 93-2 CPD Para. 283, we held that a bankruptcy court's arrangement with a firm to provide the public with photocopying services at the court constituted a procurement for services. There, the record showed that the public needed to obtain copies of court documents, that the court's staff resources were strained, and that providing photocopying services furthered the mission of the court, benefiting the court as well as the public. We reached this result notwithstanding the fact that the arrangement did not make use of appropriated funds and that the actual "buyers" of the firm's services were individuals and entities other than the court.
With respect to OPM's contention that its arrangement with CSS should instead be characterized as an "assistance relationship"--i.e., a grant or a cooperative agreement-- within the meaning of the Federal Grant and Cooperative Agreement Act of 1977, supra, the substance of the arrangement indicates otherwise. Under the act, a procurement contract is the proper legal instrument to use "when . . . the principal purpose of the instrument is to acquire . . . property or services for the direct benefit or use of the United States Government." 31 U.S.C. Sec. 6303. On the other hand, a grant or cooperative agreement is appropriate when the federal government is providing assistance to a non-federal entity in order to support the entity's own efforts in accomplishing a public purpose. See 31 U.S.C. Secs. 6304 and 6305.
In applying these statutory criteria we have held:
"The decision as to the instrument to be selected turns on the primary purpose of the transaction. The key question is this: Is the principal purpose to serve the immediate needs of the federal government, or is it to provide assistance to a non-federal entity in serving a public purpose?"
67 Comp.Gen. 13, 15 (1987); see also 65 Comp.Gen. 605 (1986); 61 Comp. Gen. 637, 640 (1982).
As discussed previously, the CSS survey will aid OPM in carrying out its responsibilities under the FEHBP statute and therefore serves OPM's immediate needs. The "public purposes" cited by OPM--which center on the dissemination of information concerning enrollee satisfaction with the plans--are essentially the same purposes OPM is itself required to accomplish under the FEHBP statute. Therefore, we view the primary purpose of OPM's arrangement with CSS as obtaining services for OPM's direct benefit and use, rather than serving an independent public purpose.

https://www.pbs.org/video/frontline-death-st-augustine/
▶
Nov 26, 2013
13. Sheriff SHOAR claims he has "recused" himself from the apparent January 31, 2019 hate crime murder of a World Golf Village resident who was investigating the September 2, 2010 Michelle O'Connell homicide.  Yet Sheriff SHOAR presumed to choose, delegate, select and name another Sheriff to investigate, just as SHOAR did on the $700,000 embezzlement by his own Finance Director over, 2011-2019. This is unethical, and NOT a recusal.
14. When Sheriff SHOAR picks the investigators, forensic auditors and medical examiners, it is a conflict of interest, NOT a recusal.  No person can serve two masters. See Matthew 6:24, cited in United States v. Mississippi Valley Generating Co. (the "Dixon-Yates" case).
15. The latest homicide victim was known by Sheriff SHOAR's office to be investigating the Michelle O'Connell homicide. It is a federal crime to kill someone in retaliation for exercising federally protected rights under the First Amendment.   United States v. Price, 383 U.S. 787 (1966)(three civil rights workers killed and buried in earthen dam in Philadelphia, Mississippi by Sheriff's deputies and KKK).  See also, Monroe v. Pape, 365 U.S. 167, 175 (1961), quoting Cong. Globe, 42nd Cong., 1st Sess., App. 166-167, quoting Rep. David Perley Lowe (R-Kansas) re: the 1871 Civil Rights Act (Ku Klux Klan Act):

While murder is stalking abroad in disguise, while whippings and lynchings and banishments have been visited upon unoffending American citizens, the local administrations have been found inadequate or unwilling to apply the proper corrective. Combinations, darker than the night [which] hides them, conspiracies, wicked as the worst felons could devise, have gone unwhipped of justice. Immunity is given to crime, and the records of the public tribunals are searched in vain for any evidence of effective redress.

16. The former Jacksonville Special Agent in Charge, Mr. James Casey, is a campaign contributor to Sheriff DAVID SHOAR.
17. Sheriff SHOAR's Finance Director RAYE BRUTNELL was also a campaign contributor to Sheriff SHOAR.  She is facing embezzlement charges and a November 4, 2019 criminal trial.
https://www.staugustine.com/news/20181121/sjso-finance-chief-arrested-on-embezzlement-charges
18. While Florida's then-Governor Rick Scott appointed Mr. Brian Haas as special prosecutor, secretive Sheriff SHOAR has chosen an undisclosed forensic auditor, keeping both special prosecutor Haas and our local St. Johns County government officials in the dark about it.  SHOAR brandishes his intent by boldly telling our local newspaper that he does not want a government audit, but a private sector audit. Wonder why?
https://www.staugustine.com/news/20181208/sheriffs-office-to-undergo-forensic-audit-in-wake-of-financial-scandal
19. Instead of investigating SHOAR, BANKS and BRUTNELL, FBI is giving our St, Johns County Sheriff up to $2,000,000.  I object.
20. Some 38 years ago, in 1981, GAO found that FBI violated the Federal Grant and Cooperative Agreement Act.  "Agencies Need Better Guidance for Choosing Among Contracts, Grants, and Cooperative Agreements, GGD-81-88 (GAO, September 4, 1981).  When will they ever learn?
21. Please take decisive steps to recommend cancellation of the FBI's cooperative agreement with Sheriff DAVID SHOAR.  Please conduct a thoroughgoing civil, criminal and administrative investigation of the nature, structure and performance of the financial and investigative relationship between Sheriff SHOAR and the FBI.

22. Efforts to speak with the FBI SAC about the MOUs were unavailing.  Messages left for her and her PIO were not returned.
23. I await production of documents by Respondent St. Johns County Board of County Commissioners, by Respondent FBI and by their  partner in these MOUs, Respondent Sheriff DAVID B. SHOAR (who legally changed his name from "HOAR" in 1994).
24. STANDING.   I have been a citizen of the State of Florida since 1995 and a citizen and resident of St. Johns County since 1999.  Our State and its state colleges and universities, our Florida Department of Law Enforcement (FDLE) and other state and local agencies were all prospective bidders on the $2 million no-bid procurement in quo.  I have standing to raise these concerns parens patriae as a journalist and citizen activist, concerned about anti-competitive practices, waste, fraud, abuse, misfeasance, malfeasance, nonfeasance and possible crimes.   I reserve the right to file a qui tam lawsuit under the False Claims Act.
25.  GAO FEE WAIVER AND CONGRESSIONAL REQUESTS TO GAO.  I request a full waiver of any GAO bid protest fees in the public interest, by analogy to FOIA fee waivers.  In the alternative, please hold this complaint in the GAO suspense file, to associate with any Congressional letter-requests for GAO audit(s).
Thank you.
With kindest regards, I am,
Sincerely yours,
Ed Slavin
Box 3084
St. Augustine, Florida 32085-3084
904-377-4998
www.cleanupcityofstaugustine.blogspot.com
www.edslavin.com
Posted by Ed Slavin at 1:47 PM