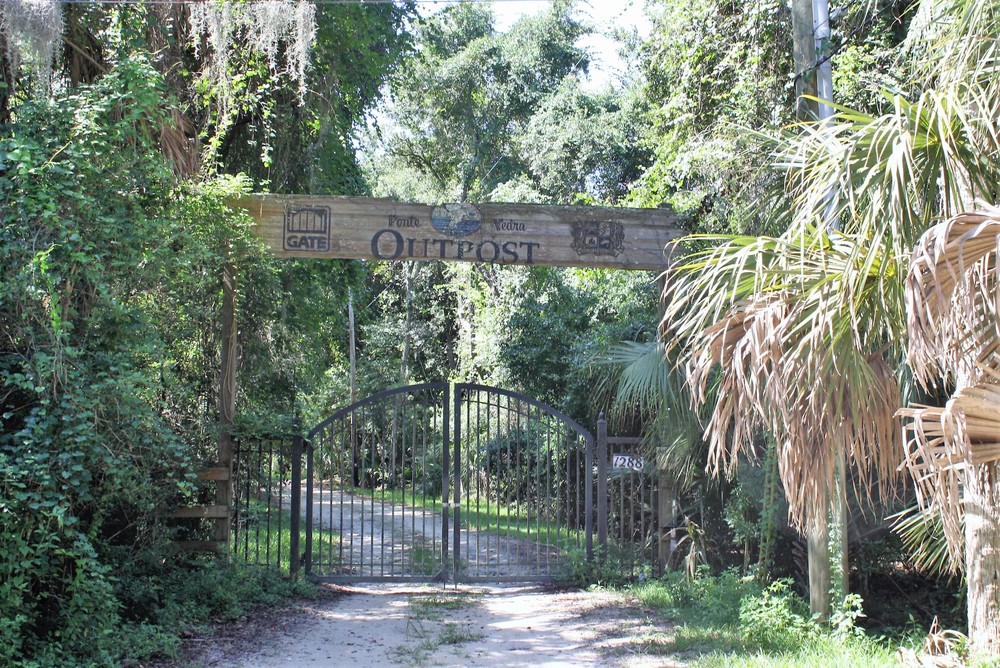 The Chairman of the PZA recused himself because his firm works for the applicant, GATE PETROLEUM, controlled by billionaire Herbert Hill PEYTON, and his son, former Jacksonville Mayor JOHN PEYTON.

This left five PZA members present and voting.  There were some 400 people in the auditorium, with more sitting outside in the St. Johns County Administration Building Rotunda.

42 of us testified in favor of preserving current conservation zoning for this historic land. We marshaled facts and evidence, as those of us in the reality-based community love to do.

After hearing 42 of us, and voting 3-2 to allow The Outpost to be eviscerated, three supine subpar PZA members demonstrated their Philistinism.  All Republican apparatchiks appointed by Republican Commissioners, the Terrible Trio did not adequately discuss our testimony, the facts or the law so much as emit trite tropes.

But the Terrible Trio were swayed by ELLEN AVERY SMITH's emotional provocative attacks on opponents as making misrepresentations were empty headed rhetoric.  The lawyer for the environment, Ralf Brookes, did an excellent job marshaling evidence and experts. The only fault was insufficient time to complete Dr. Marsha Chance;'s testimony about archaeology, including the site of the first successful British colonial indigo plnatantation under Governor Grant.

42 was our lucky number, because our view will prevail.  The Outpost will be park.

42 was the number on Jackie Robinson's baseball uniform.

Like Jackie Robinson, we will not be baited and bullied by ELLEN AVERY SMITH and GATE PETROLEIUM's bumptious billionaires. .

There is no principled reason for St. Johns County Commission on September 17th to accept PZA's 3-2 recommendation in support of billionaires indecent demand to exacerbate clogged roads, ignore significant Native American and British colonial archaeology, or threatened the water quality in the Guana River.

On August 11, the Record's Austin-based copy desk printed a 901 word obituary of a Jacksonville, Illinois Congressman, apparently thinking he was from Jacksonville, Florida.

Here's a too-short 760 word story on one of the most important moral issues of our time in our town:

Despite a sea of white shirt-clad opponents, the St. Johns County Planning and Zoning Agency decided to vote in favor of an application to develop land in the northeast part of the county known as The Outpost.

Hundreds of interested citizens crowded the county administration building Thursday, most of them wearing white to show solidarity with their fellow neighbors. In fact, the crowd exceeded capacity when the discussion of The Outpost began, leaving many to wait in the lobby and watch the meeting on a television set up there.

They spent more than an hour providing public comment, asking the PZA board to recommend denial of an application to change the land use of the land.

Instead, the five board members voted 3-2 to recommend transmittal of the plan to the state. Jeff Martin and William McCormick voted in dissent. The final vote was not taken until almost 8:30 p.m.

The Outpost is about 100 acres within the Guana Tolomato Matanzas National Estuarine Research Reserve. The Ponte Vedra Corporation — a subsidiary of GATE Petroleum Company — owns the property and is asking to change the county’s Comprehensive Plan Future Land Use Map designation from Conservation to Residential so that 66 houses and 13 docks can be built on the site.

Ponte Vedra Corporation would build on about 74 upland acres, and its project is not expected to have wetlands impacts.

Opposition has been intense. Two groups have been formed with the intention of defeating the project, Save Guana Now and Protect Guana. Representatives from both organizations spoke at length against the project.

Although the outcome Thursday didn’t go in their favor, Save Guana Now president Nicole Crosby said members of her group are still encouraged to fight against the development. Speaking with The Record on Friday, she said the PZA hearing was tough, the St. Johns County Commission meeting next month is what is important.

“I was actually anticipating this; we knew that it was going to be a major challenge,” Crosby said. “The important thing is the commissioners know what the turnout is. We’re feeling very positive about September. I think the attendance was a victory.”


The PZA is a body that passes recommendations on development and land use changes on to the County Commission. The Commission makes the final decision. It is expected to hear the transmittal request at its Sept. 17 meeting. Should the Commission approve transmittal of the Vista Tranquila project (the name for the residential development at The Outpost), it will go through the PZA and Commission again for final approval.

On Thursday, Save Guana Now and Protect Guana presented experts in ecology, traffic planning and archaeology who raised warnings about developing The Outpost into Vista Tranquila. They cited issues such as wildlife habitat preservation, traffic congestion, hurricane evacuation times, the need to maintain archaeological areas, the danger of the proximity to hunting grounds and other conservation concerns.

Representatives of the property owner, including attorney Ellen Avery-Smith, have argued that the land is inaccurately listed as conservation because much of it isn’t sensitive wetlands and therefore should be considered developable. The owners wanted St. Johns County’s administrator to change the land use to residential.

A court ruling against part of the lawsuit led to an agreement with the county and Ponte Vedra Corporation that the lawsuit be dropped and the issue be put through the normal approval process for an amendment to the Comprehensive Plan.

Avery-Smith said what Ponte Vedra Corporation is asking to do is not much different from other development in the area. Its proposal also includes “conditions to protect the natural environment,” she added.

“Opposing groups have have said that the low-density, single-family homes is an inconsistent use, yet development has been allowed along Neck road at a greater density than we are requesting,” Avery-Smith said at the meeting.

Currently the property now includes one commercial event building and small outbuildings. Those arguing against Vista Tranquila said the use of the property should remain limited to the current commercial activity there.

Also, several residents asked that the state look into buying the property, citing the Fish Island agreement in St. Augustine as a good example to follow.

The organization that is taking over Fish Island, with help from Florida Forever funds, is interested in acquiring The Outpost. North Florida Land Trust president Jim McCarthy told The Record that the land trust is definitely interested in buying the property at fair market price for conservation land, not the same value as a development with $750,000 homes on it as is being proposed.
Posted by Ed Slavin at 8:29 PM