4 Will Be Charged in Florida Nursing Home Deaths After Hurricane Irma, Lawyers Say -- A dozen residents’ deaths were ruled homicides by a medical examiner after the nursing home’s air-conditioners failed in 2017. (NY Times)

These alleged homicides are the direct and proximate result of lax regulation of profiteering health care "industry" by Florida's then-Governor RICHARD LYNN SCOTT, who invoked the Fifth Amendment 75 times and whose former company paid $1.6 billion in Medicaid/Medicare fraud settlement. He's now our Senator.


4 Will Be Charged in Florida Nursing Home Deaths After Hurricane Irma, Lawyers Say
A dozen residents’ deaths were ruled homicides by a medical examiner after the nursing home’s air-conditioners failed in 2017. 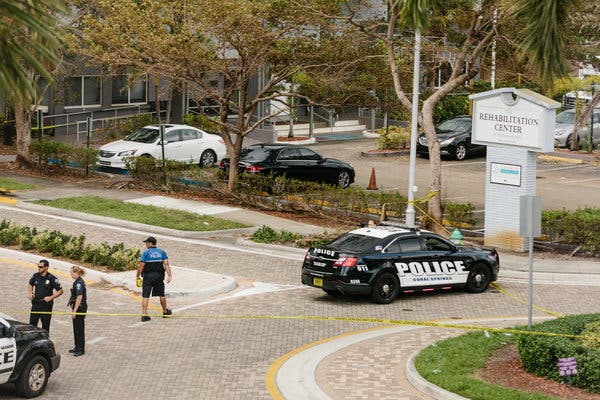 Outside the Rehabilitation Center at Hollywood Hills in Hollywood, Fla., in 2017 after Hurricane Irma.CreditCreditJason Henry for The New York Times
By Nicholas Bogel-Burroughs and Lauren Hard
Aug. 24, 2019

The police in Hollywood, Fla., plan to charge four employees of a nursing home in the deaths of a dozen residents who succumbed to heat exposure there in the aftermath of Hurricane Irma in 2017, lawyers for three of the employees said on Saturday.

Among those charged will be Jorge Carballo, the administrator of the nursing home, as well as a charge nurse and two other nurses, the lawyers said.

Eight people died on Sept. 13, 2017, at the nursing home, the Rehabilitation Center at Hollywood Hills, after air-conditioners failed in the wake of the powerful hurricane. Several more died in the following weeks. A local medical examiner ruled that 12 of the heat-related deaths were homicides.

The center was shut down, and investigations by the state and Senate found that some nurses had failed to properly record patient information, including vital signs and temperatures. The investigations also found that poor state and federal oversight and regulation had led to “questionable decision-making by facility administrators.”

In one instance, a patient was described as “resting in bed” with “even and unlabored” breathing when the patient was already dead, a state report said. Nursing home officials have said they tried to alert state authorities and the power company that they needed help restoring the air-conditioning system — and got none. More than 100 patients were transferred from the nursing home to hospitals.

The governor criticized the home for not calling 911 until residents were suffering respiratory distress, and in some cases were near death. A lawyer for the nursing home responded that patients were constantly monitored and that there was no reason to call 911 before they actually became ill.
David Frankel, a lawyer for the charge nurse, said he believed his client would be charged with 12 counts of manslaughter. The other lawyers said they had not been told what charges would be filed, but they expected manslaughter to be among them.

The Hollywood Police Department did not return a call seeking comment on Saturday.

Jim Cobb, a lawyer for Mr. Carballo said he was outraged by the planned charges. He said the police were going after people who were trying to help in the days after the hurricane devastated Caribbean islands and resulted in the deaths of 129 people, according to the National Hurricane Center.

“It’s the government scapegoating and going as far down the food chain as they can possibly go to absolve themselves of the problems that were caused,” Mr. Cobb said. “This is just wrong.”
Editors’ Picks

Lawrence Hashish said he was representing one of the nurses who would face charges. Mr. Cobb and Mr. Hashish said they expected their clients to surrender on Monday after the police obtain an arrest warrant.

“This has been a two-year investigation and now they’re bringing the charges?” Mr. Hashish said. “If there was neglect, they would have known 22 months ago.”

It is rare for authorities to bring criminal charges against health care professionals in deaths during natural disasters. After Hurricane Katrina in 2005, prosecutors in Louisiana charged a couple with negligent homicide after 34 people died in their nursing home in New Orleans. But a jury acquitted the husband and wife two years later after four hours of deliberation.

Mr. Cobb led the couple’s defense team then, and had sought to blame the state and federal government for the deaths of the trapped residents, which made up the single deadliest episode of the storm that led to 1,833 deaths.

On Saturday, Mr. Cobb said he planned to use a similar strategy to defend Mr. Carballo.

“I can assure you we will be blaming lots of folks,” Mr. Cobb said.