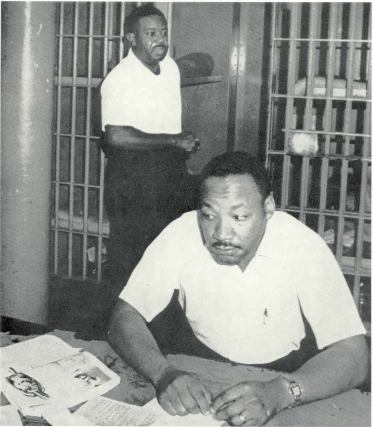 That's Dr. King, above, in St. Johns County Jail on June 11, 1964, after his arrest for asking to be seated in the. Monson Motor Lodge Restaurant, now the site of the Bayfront Hilton.

On this 56th anniversary of Dr. King's "I have a dream" speech, we're celebrating the St. Augustine City Commission's agreement on August 26, 2019 (Monday) to place an historical marker in our Plaza de la Constitucion observing a n 1897 lynching of Isaac Barrett in northwest St. Johns County.

We're proud of our City Commissioners, staff and activists, and our Lincolnville Museum.

On the other hand, St. Johns County Sheriff DAViD SHOAR's website still contains a paen to racist corrupt Sheriff Lawrence O. Davis, still falsely stating that DAVIS was "exonerated" when he was in fact removed from office by 44-2 vote of the Florida Senate, and still falsely states that DAVIS held the town together, when he and his KKK deputies fanned the flames of racism that nearly got Andrew Young killed, and was repeatedly ordered by U.S. District Court Judge Bryan Simpson to stop lawbreaking.

While Judge Simpson has a federal courthouse named for him in Jacksonville, the only thing honoring Sheriff Davis is a lying tribute on the webpage of St. Johns County Sheriff DAVID SHOAR.

So I wrote Sheriff SHOAR on August 28, 2013, 50th anniversary of the "I have a dream speech" by Dr. King, requesting corrections. .

The only error corrected since then was the extravagantly false statement that Dr. King was arrested here by 'federal agents."

For those of us in the reality-based community, here's the "fake news" still emitted by corrupt Sheriff DAVID BERNARD SHOAR, who legally changed his name from. "HOAR" in 1994:

Sheriff Lawrence O. “L.O.” Davis – 1949 until 1970. Sheriff Davis held office for 21 years. During those years, society saw a changing culture. In 1952, a new jail was completed, and Sheriff Davis moved his headquarters from the old jail on McWilliams Street to the new jail on Lewis Speedway. It was during his tenure that uniforms were adopted. The incident prompting uniforms occurred with Deputy Kenny Masters.
It seems Deputy Masters was on the beach patrolling and found a man sleeping on the beach. Deputy Masters, being in civilian clothes, wearing a gun and a very small Sheriff’s shield, approached the man. When the man awakened, he saw Deputy Masters’ gun and thought he was being robbed. The man then reached for his gun, and Deputy Masters shot the man. Later at the hospital, Deputy Masters asked the man why in the world did you go for a gun? The man said, “I thought your were trying to rob me.” The next day, Deputy Masters went down to the store, bought khaki work shirts and slacks, and pinned his shield on his shirt. Later Sheriff Davis got patches, and they were sewn onto the khaki shirt. From there, our current Sheriff’s uniform developed into what it is today.
It was also during Sheriff Davis’ time that the first marked patrol car was put on the street. Painted green and white with a star on the sides, the car was assigned to Deputy Noah Carter.
One major development that his tenure as Sheriff saw was the civil rights movement, a challenging time for our nation, state and county. In 1963, the Reverend Martin Luther King and his associates came to St. Augustine, the oldest city in the nation. St. Augustine became the site of many demonstrations. During one of these, Dr. King was arrested by deputies and booked into the St. Johns County Jail. Shortly afterwards, Dr. King and others were released from jail.
The climate was stressful in those years, but with Sheriff Davis’ leadership, the community held together. This nation moved forward after the signing of the Civil Rights Act of 1964.
Sheriff Davis was well respected in the community. Many citizens tell stories of his kindness; taking bags of groceries to those who were in need, or helping others get jobs. Sheriff Davis had been a city police officer for approximately three years prior to taking the Office of Sheriff. He had a deep, abiding commitment to the youth of our county. Also, he was one of the founders of the Florida Sheriff’s Boys Ranch, which grew from a small camp on the banks of the Suwannee River to a working ranch system, serving thousands of Florida’s children every year.
In 1970, then Governor Claude Kirk removed Sheriff Davis from office based on allegations made by several individuals. Subsequently, in a trial, Sheriff Davis was found innocent. Later, at hearings in Tallahassee in front of the Senate, Sheriff Davis was exonerated. By this time, Governor Kirk had appointed Dudley Garrett, to take Sheriff Davis’ place.
In the 1972 election, “L.O.” Davis tried to regain the office, but lost to Sheriff Garrett.
Posted by Ed Slavin at 8:17 PM