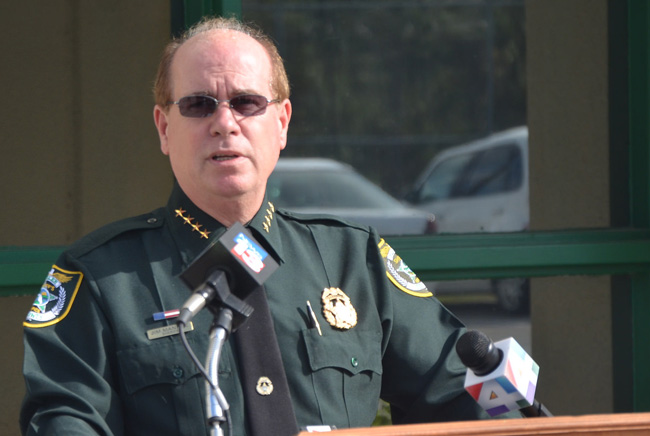 Gov. Ron DeSantis will appoint Flagler’s new judge from a list of three to six finalists. Aspiring judges have until 5 p.m. Friday, Aug. 9, to submit an application.

Former Flagler County sheriff Jim Manfre is among nine candidates so far who have submitted applications to be appointed to fill a new county judge seat in Flagler.

Manfre served two separate terms as sheriff and had been a long-time Democrat.

Republican Gov. Ron DeSantis will appoint Flagler’s judge from a list of three to six finalists. Aspiring judges have until 5 p.m. Friday to submit an application.

Manfre had been a Democrat since at least 2000 but he said on Thursday that he is now “NPA,” or no party affiliation.

“I’m not a Democrat,” Manfre said. “I’m actually an NPA and I have been for a year and a half.”

Manfre added that he believes the governor is not looking for party registration but rather for the best candidate. He said his experience as an attorney and sheriff gives him an excellent background for a judge.

But Manfre’s time as sheriff was not without issues. In 2016, Manfre received a $6,200 penalty and a public reprimand and censure from the Florida Commission on Ethics for violations stemming from early in his second non-consecutive term as sheriff from 2012 to 2016.

“I believe the entire investigation was a political smear,” Manfre said. “I don’t believe that any of those charges should have been founded, and I think they are based on political considerations and not on facts.”

Manfre was defeated by Larry Jones in the Democratic primary in 2016 in a race eventually won by Republican Rick Staly.

Manfre is not the only one with some issues.

DeLaroche was a Volusia County judge until 2007 when he resigned while under investigation by the Judicial Qualifications Commission after he was accused of fixing traffic tickets for people he knew, including his father-in-law. DeLaroche has previously said his error involved one ticket and that he had matured since then.

Assistant State Attorney J. Ryan Will, who prosecutes homicide cases, was reprimanded by the state Supreme Court in 2016 in part for repeatedly calling defendant Jerry Roy Crew a “crackhead” during a murder trial. The 5th District Court of Appeal overturned Crew’s conviction. The Supreme Court also found that Will misrepresented testimony during his closing argument. Will said that was a mistake due to differing testimony from a witness.
Posted by Ed Slavin at 7:45 PM