So a Virginia restaurant kicked out one of TRUMP's fanatical mouthpieces, SARAH HUCKABEE SANDERS.
This is so wrong.
If I owned the restaurant, I would have treated her to a bottle of "two buck chuck" and engaged with her.
I would have interviewed her.
In vino veritas.
She would have had her opportunity to respond, on the record, before video cameras.
Besides, Robert Mueller needs more witnesses.  Confession is good for the soul
And the church always welcomes sinners.
Plus, this would be illegal in DC. The DC Human Rights Act bans discrimination based on political affiliation.
Misguided restaurant owner could have waited until after dessert, then noted for the record the tip left, then read a statement on behalf of the entire staff, like the cast of the Broadway Musical Hamilton did with Vice President Mike Pence in 2016.
Misguided restaurant owner ignores the wisdom of Al Gore, who ate at Red Hot and Blue barbecue restaurant, co-owned by Lee Atwater, signing him a campaign poster, "Don't let politics get in the way of good BBQ." It's framed at their location near Annapolis, MD.
The National Restaurant Association policy bans discrimination based on "political beliefs," stating inter alia:
The National Restaurant Association and its affiliated organizations, including the National Restaurant Association Solutions, prohibits discrimination in all its programs and activities on the basis of race, color, national origin, gender, religion, age, disability, political beliefs, sexual orientation, marital/family status or any other category protected under applicable law.
This principled view is enshrined in the 1964 Civil Rights Act, made possible by the arrests of Rev. Dr. Martin Luther King, Jr. and some 1000 other people here in St. Augustine, and tens of thousands throughout AmeriKKKa, where restaurants once refused to serve African-Americans.
The District of Columbia Human Rights Act prohibits discrimination on 20 protected traits:

Protected Traits for Housing, Employment, Public Accommodations and Educational Institutions include:
1. Race: classification or association based on a person’s ancestry or ethnicity
2. Color: skin pigmentation or complexion
3. Religion: a belief system which may or may not include spirituality
4. National origin: the country or area where one’s ancestor’s are from
5. Sex: a person’s gender; sex discrimination includes sex harassment, and discrimination based on pregnancy, childbirth, related medical conditions, breastfeeding, and reproductive health decisions.
6. Age: 18 years or older
7. Marital status: married, single, in a domestic partnership, divorced, separated, and widowed
8. Personal appearance: outward appearance, but is subject to business requirements or standards
9. Sexual orientation: homosexuality, heterosexuality, and bisexuality
10. Gender identity or expression: your gender-related identity, behavior, appearance, expression or behavior which is different from what you are assigned at birth
11. Family responsibilities: supporting a person in a dependent relationship, which includes, but is not limited to, your children, grandchildren and parents.
12. Political affiliation: belonging to or supporting a political party
13. Disability: a physical or mental impairment that substantially limits one or more major life activities; includes those with HIV/AIDS.
Additional Traits Applicable to Some Areas include:
14. Matriculation (applies to housing, employment and public accommodations): being enrolled in a college, university or some type of secondary school.
15. Familial Status (applies to housing, public accommodations and educational institutions): a parent or guardian with children under 18
16. Genetic information (applies to employment and public accommodations): Your DNA or family history which may provide information as to a person’s predisposition or likely to come down with a disease or illness.
17. Source of Income (applies to housing, public accommodations and educational institutions): origination of a person’s finances
18. Place of Residence or Business (applies to housing and public accommodations): geographical location of home or work
19. Status as a Victim of an Intrafamily Offense (applies to housing): a person who was subjected to domestic violence, sexual assault and stalking
Please note that these definitions are not exhaustive.
20. *NEW* Credit Information (applies to employment): any written, verbal or other communication of information bearing on an employee's creditworthiness, credit standing, credit capacity or credit history.
This information is also available in PDF format.

-------
AND IF I owned a restaurant, and St. Augustine City Attorney ISABELLE CHRISTINE LOPEZ walked in, I'd tell her that I forgive her for being an anti-literate energumen.

On Thursday, June 21, 2018, at the St. Augustine Historic Architectural Review Board meeting, she retaliated for protected activity concerning my giving the history of LEN WEEKS's destruction of DON PEDRO FORNELLS HOUSE, for which he was fined only $3700 and never prosecuted.

Louche Lopez replied that "as a woman, I resent" my mentioning the hugging, claiming she had the right to "great anyone in any manner that I choose."

In fact, it was an appearance of impropriety, which would have been true of any City Attorney, man or woman.  I've been equally critical of her predecessors, GEOFFREY DOBSON, JAMES PATRICK WILSON and RONALD WAYNE BROWN.  Every single one of them.

After the meeting, she stomped by and I said, "You can resent all you want, but in your heart you know I'm right."  She responded by calling me a "sexist."


Nasty developer puppet, who plays the "gender card" from the bottom of the deck. 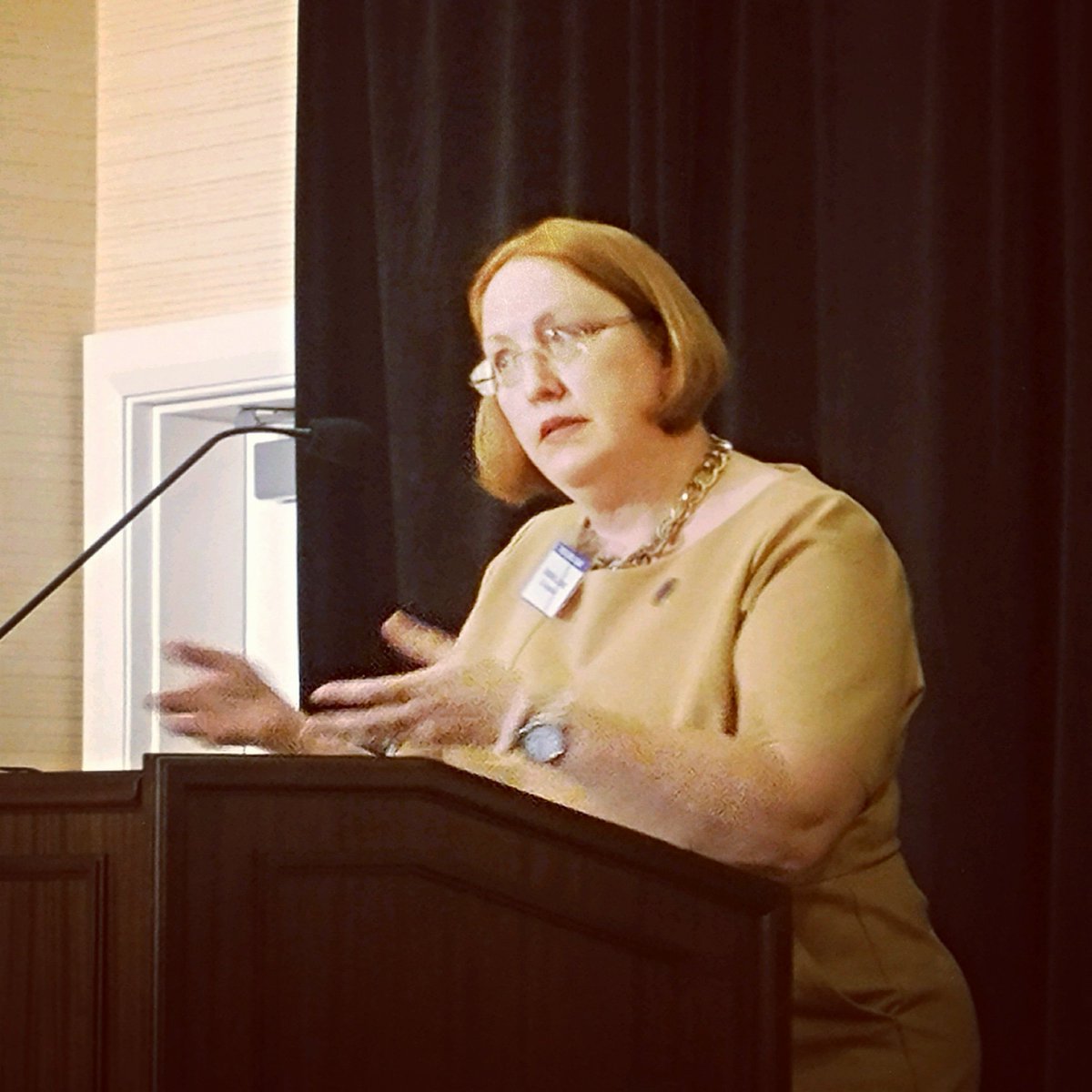 Serving as Program Chair of the City, County and Local Government @theflabar certification exam seminar in Orlando, and presenting on #eminentdomain #UFLaw @ufalumni Good luck to all lawyers taking the exam! pic.twitter.com/cWLZK99BiV
— Isabelle Lopez (@izzystaug) May 10, 2018


Sarah Huckabee Sanders and the lost art of shunning

White House press secretary Sarah Huckabee Sanders speaks during the daily press briefing at the White House on May 1. (Evan Vucci/AP)
White House press secretary Sarah Huckabee Sanders — whose lies are piling up at a furious rate and whose defense of the child-separation policy prompted a reporter to exclaim, “Come on, Sarah, you’re a parent” — was reportedly asked to leave a restaurant in Virginia on Friday because she works for President Trump. In a tweet, she explained that “I was told by the owner of Red Hen in Lexington, VA to leave because I work for @POTUS and I politely left.” She then couldn’t help lying again: “I always do my best to treat people, including those I disagree with, respectfully and will continue to do so.” Anyone who has seen her sneer, insult and condescend to the press knows that’s not the case.
This episode follows one on Tuesday in which Homeland Security Secretary Kirstjen Nielsen was heckled at a Mexican restaurant, a culinary choice as jarring as Melania Trump’s jacket given the administration’s deliberate cruelty exhibited toward Hispanic children and their families. The loud protesters who gathered prompted her to leave. In addition, anti-immigrant zealot Stephen Miller, who pushed as hard as anyone for snatching kids from their parents, was dining in a different Mexican restaurant last Sunday when, according tothe New York Post,  a protester called out, “Hey look guys, whoever thought we’d be in a restaurant with a real-life fascist begging [for] money for new cages?”
Unsurprisingly, the restaurant confrontations became a source of debate on cable television. On CNN, Ana Navarro tartly observed, “You make choices in life. And there is a cost to being an accomplice to this cruel, deceitful administration.” So, are these reactions to Trump aides reassuring and appropriate acts of social ostracism that communicate to the cogs in a barbaric bureaucracy that they cannot escape the consequences of their actions? Alternatively, should we view these as a sign of our descent into incivility, evidence that we are so polarized we literally cannot stand to be in the same room as those with whom we disagree?
It depends on how you view the child-separation policy. If you think the decision to separate children from parents as a means of deterring  other asylum seekers is simply one more policy choice, like tax cuts or negotiations with North Korea, then, yes, screaming at political opponents is inappropriate. Such conduct is contrary to the democratic notion that we do not personally destroy our political opponents but, rather, respect differences and learn to fight and perhaps compromise on another day. If, however, you think the child-separation policy is in a different class — a human rights crime, an inhumane policy for which the public was primed by efforts to dehumanize a group of people (“animals,” “infest,” etc.) — then it is both natural and appropriate for decent human beings to shame and shun the practitioners of such a policy.
This exception to the rule of polite social action should be used sparingly (if for no other reason than we will never get through a restaurant meal without someone hollering at someone else). If a lawmaker, for example, who favors a harsh, ill-conceived immigration bill walks into a restaurant, I would not recommend raising a rumpus (though I would not invite that person to my home).
Listen, I get it. The notion of shunning or excluding or heckling can devolve into philosophical hair-splitting as to whether someone has engaged in normal public service or whether they’ve strayed outside the bounds of decent behavior. Each to his own method of expressing disdain and fury, I suppose.
Nevertheless, it is not altogether a bad thing to show those who think they’re exempt from personal responsibility that their actions bring scorn, exclusion and rejection. If you don’t want to provoke wrath, don’t continue to work for someone whose cruel and inhumane treatment of others rivals the internment of U.S. citizens and noncitizens of Japanese descent during World War II. And yes, I’d have hollered at then-California Attorney General Earl Warren, who pushed for the roundup of people of Japanese ancestry, even American citizens.
1:42
Opinion | What's the hurry, Sarah Sanders?
Watch how White House press secretary Sarah Huckabee Sanders manufactures urgency to avoid answering reporters' questions. (Gillian Brockell, Kate Woodsome, Danielle Kunitz, Erik Wemple/The Washington Post)
Read more:
Erik Wemple: ‘You’re a parent’: Reporter presses Sarah Huckabee Sanders on immigration
Jennifer Rubin: Sanders lies because that is what this White House does
Ruth Marcus: If Melania Trump really doesn’t care, then who does?
Anne Applebaum: The dark history behind Trump’s inflammatory language
Alexandra Petri: How to sleep at night when families are being separated at the border
Read These Comments newsletter
The best comments and conversations at The Washington Post, delivered every Friday. Join the conversation.