Corrupt President and ineffectual HUD Secretary, who is surprised?  Here in St. Johns County, there's not even a Housing Authority.  Is this a silent somnambulistic tribute to  pervasive institutional racism, which  "covers Dixie like the dew," as my mentor, Anderson County, Tenn.  DA James Nelson Ramsey explained to me in the early 1980s.


WASHINGTON — The country is in the grips of an escalating housing affordability crisis. Millions of low-income Americans are paying 70 percent or more of their incomes for shelter, while rents continue to rise and construction of affordable rental apartments lags far behind the need.
The Trump administration’s main policy response, unveiled this spring by Ben Carson, the secretary of housing and urban development: a plan to triple rents for about 712,000 of the poorest tenants receiving federal housing aid and to loosen the cap on rents on 4.5 million households enrolled in federal voucher and public housing programs nationwide, with the goal of moving longtime tenants out of the system to make way for new ones.
As city and state officials and members of both parties clamor for the federal government to help, Mr. Carson has privately told aides that he views the shortage of affordable housing as regrettable, but as essentially a local problem.
A former presidential candidate who said last year that he did not want to give recipients of federal aid “a comfortable setting that would make somebody want to say, ‘I’ll just stay here; they will take care of me,’” he has made it a priority to reduce, rather than expand, assistance to the poor, to break what he sees as a cycle of dependency.

And when congressional Democrats and Republicans scrambled to save his department’s budget and rescue an endangered tax credit that accounts for nine out of 10 affordable housing developments built in the country, Mr. Carson sat on the sidelines, according to legislators and congressional staff members.
Local officials seem resigned to the fact that they will receive little or no help from the Trump administration.
“To be brutally honest, I think that we aren’t really getting any help right now out of Washington, and the situation has gotten really bad over the last two years,” said Chad Williams, executive director of the Southern Nevada Regional Housing Authority, which oversees public housing developments and voucher programs that serve 16,000 people in the Las Vegas area.
Nevada, ground zero in the housing crisis a decade ago, is now the epicenter of the affordability crunch, with low-income residents squeezed out of once-affordable apartments by working-class refugees fleeing from California’s own rental crisis.
“I think Carson’s ideas, that public housing shouldn’t be multigenerational, are noble,” Mr. Williams said. “But right now these programs are a stable, Band-Aid fix, and we really need them.”

Underlying the conflict between Mr. Carson and officials like Mr. Williams are fundamental disagreements over the role the federal government should play.
Mr. Carson believes federal aid should be regarded only as a temporary crutch for families moving from dependency to work and sees the rent increases as a way to expand his agency’s budget. Low-income renters and many local officials who run housing programs see the federal assistance as a semi-permanent hedge against evictions and homelessness that needs to be expanded in times of crisis.
This year, the White House proposed to slash $8.8 billion from the Department of Housing and Urban Development’s most important housing programs. While aides say Mr. Carson privately pushed for a restoration in programs for seniors and disabled people, he publicly supported the gutting of his own department, reiterating to lawmakers last month that he felt as much responsibility toward taxpayers as tenants.
“I continue to advocate for fiscal responsibility as well as compassion,” Mr. Carson told a House committee in June. He declined to comment for this article.
Under Mr. Carson’s most significant policy proposal as secretary, so-called maximum rents paid by the poorest households in public housing would rise to $150 a month from $50.
His proposal has received little support from local housing operators. Over the past month, Mr. Carson has huddled with Representative Dennis A. Ross, Republican of Florida, who is drafting less stringent legislation that would allow, but not mandate, local housing authorities to raise rents and carry out reforms to streamline the process of verifying the poverty of applicants, aides said.
Still, both proposals represent a paradigm shift in federal housing policy, ending the requirement that low-income tenants spend no more than 30 percent of their net income on rent.


Tying rents to incomes has been a central part of the system since 1981, especially for the Section 8 housing voucher program, enabling 2.1 million low-income families to rent private apartments they could not otherwise afford. Mr. Carson’s proposal would peg rents to 35 percent of gross income for all tenants. The Ross bill excludes voucher recipients, at the request of local housing authority officials.
“We need sensible reforms to make the system more efficient for agencies and residents,” said Adrianne Todman, chief executive of the National Association of Housing and Redevelopment Officials. “But now is not the time for arbitrary federal rent hikes.”
“This isn’t about dependence,” said Diane Yentel, president of the nonprofit National Low Income Housing Coalition, a Washington-based advocacy group that has released several recent reports documenting the affordability crunch. “Today’s housing crisis is squarely rooted in the widening gap between incomes and housing costs.”
And the crisis didn’t begin under Mr. Trump’s presidency.
Median national rents rose by 32 percent in constant dollars from 2001 to 2015, while wages remained flat, according to the Pew Charitable Trusts. The pace has picked up over the last few years, buoyed by an improving economy.
The rent increases are hitting poor and elderly people, African-Americans and low-income wage earners the hardest. A survey by the National Low Income Housing Coalition found that a worker earning the state minimum wage could afford a market-rate one-bedroom apartment in only 22 of the country’s 3,000 counties. 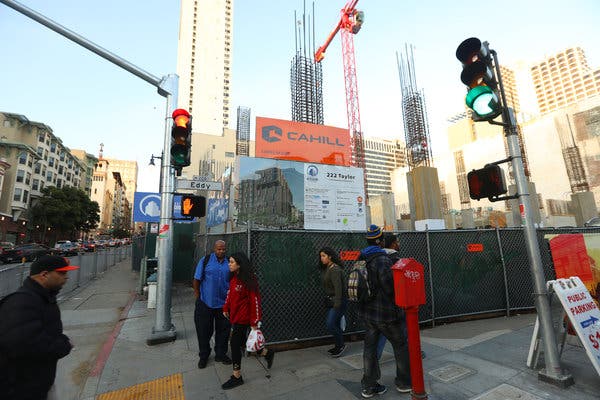