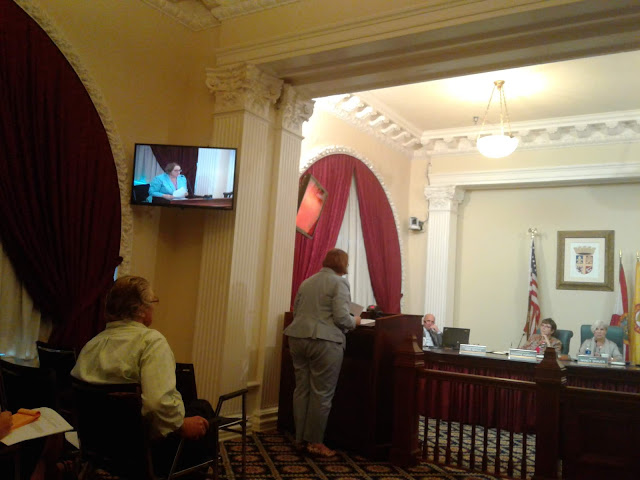 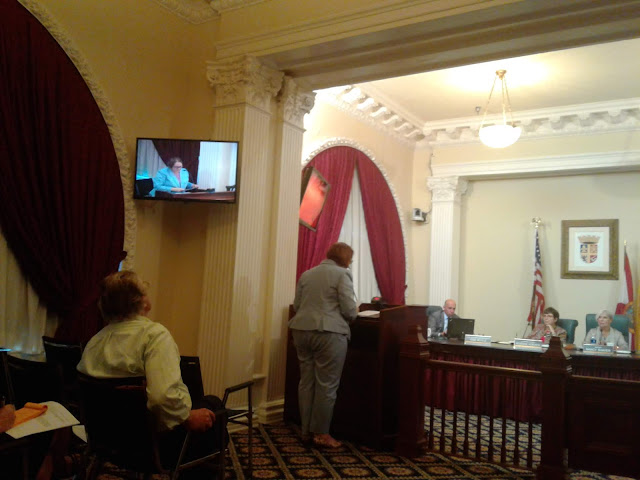 Read annual report of St. Augustine City Attorney ISABELLE CHRISTINE LOPEZ, who in her standup report to Commissioners July 23rd described herself and her office as a "lean, mean, law machine."

This devious developer puppet's office wastes one half million dollars a year on bad advice, or no advice at all.

LOPEZ has no moral compass.

LOPEZ failed to recover attorney fees from the Whetstones or Wendlers for their frivolous "property rights" lawsuits against the City.

In 2018, LOPEZ browbeat PZB member Carl Blow about being too "aggressive" in his meeting with representatives of D.R. Horton, Inc on Fish Island, resulting in Mr. Blow's public recusal and Lopez refusing to give any facts about her actions.

In 2014, LOPEZ openly and notorious hugged LEN WEEKS after he was fined only $3700 for demolishing Don Pedro Fornells House, 62A Spanish Street, on September 25, 2014, working without permits, ignoring directions from his own engineer and architect and the City archaeologist and building officials not to dig a ditch all the way around the 211-year old Spanish colonial home at once, but to do it in four foot segments.  In a hurry, LEN WEEKS destroyed one of only 31 Spanish colonial structures.  Former Mayor LEN WEEKS was at the time chair of the Historic Architectural Review Board, chair of the Parking and Traffic Committee, and head of the St. Augustine Sister Cities club.  LOPEZ was his thrall and showed it in hugging him after his astonishingly lenient fine (it could have been $10,500 under Florida law)..

LOPEZ attacked me at a city board meeting in retaliation for criticizing her hugging, saying it was sexist, and that she had a right to greet people in any manner she chose, falsely claiming that she just happened by at the end of the Code Enforcement meeting, when she had been sitting in the back of the room for the entire hearing.

In her ethical "Twilight Zone," ensconced in her fourth floor office, refusing to return my telephone calls for months in retaliation for candid criticism, who is ISABELLE CHRISTINE LOPEZ?

Maladroit City Attorney, untethered to truth and an untrustworthy lapdog for developers.

MEMORANDUM
TO: Mayor and City Commissioners
DATE: July 13, 2017
RE: ANNUAL STATUS UPDATE REPORT
Please find enclosed the following documents reflecting 2016 year-in-review:
Administrative:
The City Attorney’s office currently consists of one City Attorney with twenty years of experience and one Assistant City Attorney with approximately four years of experience. The office is supported by an administrative assistant new to our office who also provides reciprocal lunch and vacation coverage to the City Manager’s administrative assistant.
The offices physically consist of three separate offices, with overflow filing capacity at the City Manager’s office, and printing capacity at a communal printer in a separate room. The preliminary budget submitted to Administration for fiscal 2017-18 is $403,695.00. This includes salaries and benefits, professional membership dues,

1
continuing education and training, office supplies and copying, and specialty supporting services such as real estate appraiser costs, title company searches, court reporting costs and legal research software and books.
Overview:
The City Attorney’s office provides general counsel services to the City Commission and all of the City’s boards and committees; the CRA, HARB, PZB, Code Enforcement, as well as, issue specific committees as appointed. The range of services includes attending public meetings, drafting resolutions and ordinances, reviewing upcoming agenda items, training staff and boards on Government in the Sunshine, Public Records and Ethics, assisting staff in answering board member or citizen questions, and advising staff on issues ranging from land use to life safety codes. In addition, the City Attorney by Charter advises officials on issues relating to their official duties, which can include requesting formal and informal opinions from the Commission on Ethics or the Attorney General’s office.
Legislative Review:
The City Attorney keeps abreast of changes in the law or proposed legislation that may impact the City. This past legislative session was especially active in terms of sponsored bills that could have impacted the City. Our office tracked fifty-one (51) bills from initial filing through enactment or setting aside. In addition, we were very active in proposing specific bill language to protect the City’s interest and coordinating with the City’s legislative consultants on both text and strategy, most especially regarding the telecommunications bill and its impact on our historic streetscapes.
Special Projects:
As part of our staff support to City departments, in the past year we have actively reviewed and provided comment and proposed language to a number of special projects including the Historic Preservation Master Plan, the ‘perils of flood’ comprehensive plan amendments, the floodplain management and building code amendments, and the Anastasia Boulevard Entry Corridor amendments.
In the past year our office met with and negotiated extensively with the Guana Tolomato Mantanzas National Estuarine Research Reserve at both the state and federal levels to successfully negotiate a Memorandum of Understanding incorporating the City into the reserve. Additionally, we reviewed revenue sources from tax levies and presented potentials as part of the annual budget review.

2
Hurricane Recovery:
Hurricane Matthew and its aftermath created its own workload including local emergency orders, compliance with federal and state emergency management regulations and the CEMP (St. Johns County’s Comprehensive Emergency Management Plan, adopted by the City by resolution), as well as post-hurricane rebuilding and FEMA grants. In addition, the City took on the role of post-hurricane clean up within privately owned roads that required its own separate set of documentation produced by our office in order to obtain federal approval.
Contracts, Bonds, Leases:
Contract and procurement review is provided by our office, as are traditional and submerged land leases. Most standard contracts, including letter agreements, leases, license agreements, bailments and object loan agreements utilize standardized templates created and revised episodically by the City Attorney’s office. Additional contract and bid review is required when the City piggybacks on other agency contracts, and occasionally vendors insist on their specific contract forms which requires more revisions and legal review. All bonds, contracts and instruments, per Charter, must be reviewed and endorsed by the City Attorney.
In-House Litigation:
The City Attorney’s office also provides the defense to Petitions for Writ of Certiorari (appeals of zoning or permit denials) from the local circuit court through to the Florida Supreme Court. Historically, this office did not defend appeals of permit denials in court. Since 2011, we have kept this type of work in-house because I have continued representing the City on these matters even while I took on the new responsibilities of City Attorney. For example, the 7-Eleven litigation was kept in-house through two different appeals. Currently, we have the self-storage petition similarly pending in circuit court. We have also kept other types of litigation in-house, including mandamus actions, a riparian rights lawsuit, as well as, the defense of all code enforcement orders through the statutory dispute resolution hearing process before a special magistrate, known as §70.51 hearings.
We prosecute both criminal and civil code violations, which includes discovery, motion practice, hearings and ultimately trial. Included with this report is a chart of 2016 dispositions. Typical criminal code enforcement cases involve drinking in public, camping in public, urinating in public or panhandling in violation of City ordinances. In addition to criminal code enforcement, this office also enforces through the court system, civil citations. These range from bicycle, skateboard and leash law violations that are not administratively paid within the first 30 days, to more complex mooring field and noise violations that raise constitutional and procedural claims. This office also prosecutes small claims cases on occasion, and defends the City’s interests as a creditor in foreclosures.

3
In the past year, due to a statutory change regarding criminal asset seizure in forfeiture proceedings, we assisted our police department in formulating standard operation procedures and updating training requirements for forfeitures. Our office prosecutes civil forfeiture cases in circuit court.
In addition to purely litigation matters, the City Attorney’s office also responds to inquiries by the Justice Department, Labor Department, and local citizens on issues ranging from handicap accessibility to wage and hour issues involving our contractors, as well as complaints pursuant to the City’s Human Rights Ordinance.
Outside Counsel:
The City Attorney by resolution of the City Commission is authorized to retain outside counsel to assist in the legal representation of the City. Some recurring outside counsel costs include labor law counsel, but others are individualized case-by-case assistance on specialty issues such as bonds, eminent domain and environmental law. In addition, the City must hire a special magistrate when a property owner makes a claim to the statutory alternative dispute resolution process (§70.51), such as when appealing an order of the Code Enforcement Board. The City must also pay for a special criminal defense attorney for indigent defendants in criminal citation prosecutions.
Our office represents the Code Enforcement Board and defends its orders, but statutorily we are prohibited from also representing the prosecution of Code Enforcement cases before that Board. Most cases are presented and prosecuted by the Building Official and code enforcement officers directly, but occasionally an attorney must be hired to advise staff in its prosecution of a particularly involved or difficult case.
Litigation that is not covered by our insurer, such as the Wendlers’ Bert Harris Act case, as well as, contract disputes, is billed to outside firms. These cases are document intensive, with tens of thousands of pages of supporting documents being filed by the plaintiffs in one case alone. This type of intensive litigation requires dedicated paralegal and associate support staff, as well as, litigation software to track discovery, that our office does not possess. Although the assistance of outside counsel relieves the work load of the two attorneys in the City Attorney’s office, nonetheless, outside counsel rely on our institutional knowledge and we are intrinsically involved in assisting their work, especially when reviewing discovery requests and coordinating the sometimes very extensive responses necessary from our dozen City departments. In addition, our office coordinates with the outside attorneys on all pre-litigation claims, most of which consist of slip and fall personal injury, including research and analysis regarding the City’s historic ownership, maintenance and control of right-of-way.

4
Conclusion:
I hope that this brief report gave you a meaningful review of our duties and operations. As always, should you wish to meet with me individually to discuss any of this information, or the specifics of a particular case, please let me know.
As in previous years, I have asked the City Manager to place this annual status update report on the City Commission’s consent agenda for the July 24, 2017 City Commission meeting.