Every good Republican should kick DONALD JOHN TRUMP in the ass. Otherwise, don't pretend to be patriotic. Your President is a disgrace to the human race," as Jimmy Carter would say. 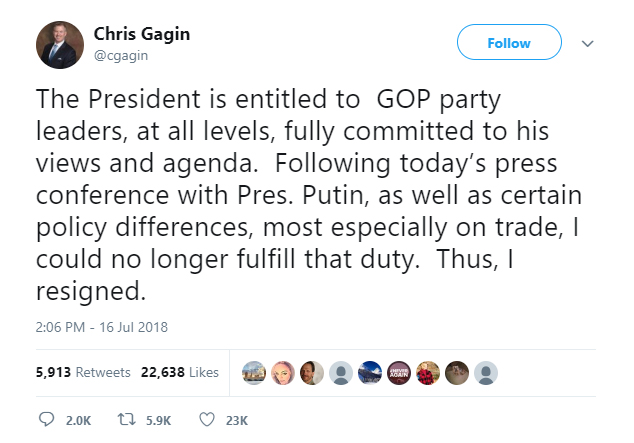 This image captured via screenshot shows former Belmont County Republican Party Chairman Chris Gagin’s tweet announcing his resignation.
ST. CLAIRSVILLE — A Belmont County tweet in the wake of an international press conference has brought national attention to the former head of the county’s Republican Party.
Chris Gagin announced his resignation Monday as Belmont County Republican Chairman over social media. In it, he said the press conference between President Donald Trump and Russian President Vladimir Putin led to his decision.
“I certainly didn’t wake up (Monday) morning thinking I was going to resign,” he said during a Tuesday interview. “I watched the press conference between the president and President Putin, and I became deeply, deeply concerned about the president’s ability to secure the interests of the United States.”
Gagin described the precipitating moment that acted as his tipping point.
“The president was asked point-blank whether he believed his intelligence community and the consensus view that Russia meddled in the election, or if he believed President Putin’s denial, and he would not support the conclusions of the intelligence community, and went on to say that President Putin had been very strong and forceful in his denials,” said Gagin. “That’s just not a position I believe the president of the United States can take on foreign soil.”
Gagin also said he found his reservations in conflict with his duties as head of Belmont County’s Republican Party.
“You have to remember that my position is truly political,” he said. “As party chairmen, we exist to help get Republican candidates elected, and I’ve been committed to that, but I also think even though we’re not quite through the midterms, it’s very important for a chairman to be fully supportive of the president’s positions when that president is part of his or her party.”
By Tuesday evening, Gagin’s tweet had been seen 4 million times and had been quoted in national outlets.
“I have interviews right now with the BBC, Fox News, possibly CNN (Wednesday morning),” Gagin said.
“I am greatly surprised at the national reaction.”
He said he expects this focus to quickly shift back to national politics.
Gagin said he remains a Republican and said he hopes his decision is regarded as a personal one.
“Serving as chairman has been one of the great honors of my professional life,” he said.
The executive committee of the Belmont County Republican Party will choose a new chairman at the upcoming August meeting. Treasurer Cynthia Fregiato said the announcement came as a surprise.
“Without any consultation or notice from the chairman, the committee and the officers received an email notifying us of his resignation,” she said. “We received that (Monday). It was a surprise … There’s never been any issues as far as I’m concerned or I am aware of with the chairman.”
Vice Chairman David Jones also said he was surprised.
“As far as the reason why he resigned, I have no idea, he said. “There were no internal issues. We’ll proceed. I’ll be chairman until we appoint someone else.”
Jones and Fregiato mentioned two county commissioners and the majority of judges who are GOP members as possible candidates for chairman. They intend to continue the campaigning for candidates.
“Chairmen come and go,” Jones said. “The party’s alive and doing well and better than we have done in many years.”
Jones and Fregiato also expressed surprise at the degree of national attention that greeted th announcement.
“I was not aware of all the national attention,” Jones said. “We did not put any of that out at all.”
Shawna Roberts, candidate for U.S. House of Representatives in Ohio’s 6th District, also commented.
“Whether we are Democrats or Republicans, most of us here in eastern Ohio are patriots dedicated to keeping America strong,” said Roberts in a prepared statement. “This is not a partisan issue, and all of us should be concerned. (Gagin), you made a difficult choice, with honor and integrity.”
Belmont County Democratic Party Chairman Phil Wallace had no comment on the internal workings of the GOP.
“We of the Democrat Party are focusing on our Democrat issues for the November election, and that is education, health care and work with the unions,” he said. “I don’t know what the Republicans are doing, but that’s what we’re focusing on … I’m not going to make any comments about what Mr. Gagin did.”
The Belmont County Republican Party meets at 7 p.m. the second Tuesday of each month at the party headquarters, 7 W. Main St., St. Clairvsille. However, August’s meeting was changed to the first Tuesday because of scheduling conflicts. A time will be set and announced later.
Posted by Ed Slavin at 5:53 AM