A Jacksonville jury ordered D.R. HORTON to replace stucco, roofs and windows on an entire 240-unit Heron's landing development in after a 38 day trial in 2016.   This is the same Texas company (NYSE: DRI) that wants to destroy Fish Island for a gated community, destroying the Matanzas River oyster farming industry and obliterating a unique viewshed and historic site.

JACKSONVILLE, Fla.—After four years of litigation and an epic 38-day trial, a jury found America’s largest homebuilder was negligent when it built the Jacksonville community of Heron's Landing.
The verdict requires DR Horton to pay $9.6 million to remove and replace the stucco, roofs and windows on the entire 240-unit development.
Condo residents and experts testified that the Beach Boulevard structures violate Florida building code, and are riddled with defects, including cracked stucco, leaking roofs, and failing windows and sliding glass doors.
Attorneys say the damage amounts to $9 million, or nearly $38,000 per condo.
Before discharging the six member jury, Circuit Judge James Daniel said words could not convey his gratitude for their lengthy service and careful attention. He said a personal goodbye to each juror as they left, shaking their hands, and it was clear jurors were moved. One juror said she was “a hugger,” before embracing the judge tearfully. “It’s emotional,” she admitted.
Heron's Landing property manager Karen Floyd celebrated the verdict. "There are so many developer/builders that build these complexes, walk away from it, and don't look back," she told First Coast News. "And they're not ever held accountable. I think this is a landmark case where the builder/developer has been held accountable now."
Resident Paul Vetter said he hoped the verdict encouraged others to pursue construction defect cases. "If you have an issue with the builder, go for it! We stuck, in there three years [almost four], and there were times when it was really tough, and we had to dig deep in our pockets. Now, it's a message that it can be done."
DR Horton, the nation’s largest home builder, had denied the claim. Its attorneys say the condos are “fine” and that any defects are isolated or insignificant. The company has also said that the condo owner association failed to properly maintain the buildings, contributing to their condition.


The case has featured thousands of exhibits and dozens of witnesses, including some prominent residents. Fifth District State Attorney Brad King testified that a condo he bought for his college aged children in lieu of a rental had extensive leaks, plumbing failures and stucco problems.
Magistrate John Sampson, who typically presides over Duval County Drug Court, also serves as President of the Heron’s Landing Condo Association Board. He testified the problems were extensive – and compared it to a “cancer.”
“The more we discovered the more there was,” Sampson told the jury. “It just kept growing and growing.”
DR Horton Executive VP and Chief Operating Officer John Zakoske defended the company’s construction practices. “It makes more sense for us to give you a good product have you refer your friends and family, your coworkers to us.” he told the jury.
“We can sell them a home or sell you your next home. It’s just good business We really don’t do that much advertising so we rely on word of mouth and our reputation in the community to sell houses and stay in business."
DR Horton attorneys did not comment following the case, but both the condo owners and their lawyers anticipate the company will appeal. Regardless, plaintiffs' attorneys will face DR Horton again soon. They have a similar claim against the company from an almost identical Jacksonville development, called Windsor Falls. 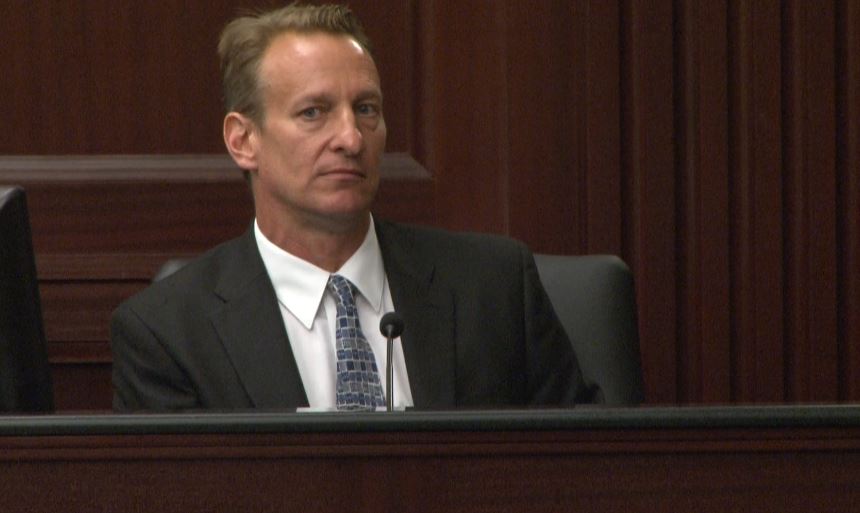 DR Horton Chief Operating Officer John Zakoske defended the community of Heron's Landing, telling jurors "it's just good business sense" to build good homes.
Circuit Judge James Daniel told jurors Tuesday that they had to determine three things: if the buildings violate state building code, whether the plaintiffs were “damaged” by that, and if DR Horton knew or should have known about the violations.
More than a dozen condo owners and two dozen supporters of DR Horton attended Tuesday’s closing arguments. The case is an extremely rare airing of structural defect claims. Virtually all new home contracts require that defect clams be handled in secret arbitration proceedings. In this case, the Condo Association rather than the individual homeowners sued, contending isn’t bound by contracts signed by homeowners.
Despite the length of the 36 day trial, the six jurors and three alternates remained attentive and seemingly good natured. Jurors are paid $30 a day for their services, but they do not receive that money until after the conclusion of the trial.
Heron’s Landing attorney Barry Ansbacher presented his closing arguments Tuesday morning, telling jurors that DR Horton chose “speed and greed” over quality construction.
“Just do it right,” he said, evoking their motto, “America’s largest homebuilder.” He asked the jury to award $9 million to repair the buildings.
DR Horton attorney Robert Carlson began his closing arguments after lunch.
"We aren't going to demonize the home owners," he said. "We like the homeowners. In fact, we would like them to buy another home from DR Horton and think at the end of this trial they might because they are performing fine."

D.R. HORTON appealed, but it was denied per curiam:

In May of 2016, D.R. Horton was ordered to pay more than $9 million to Heron’s Landing, to repair multiple construction defects in the 240-unit condo association.
$9.6M awarded to Jacksonville condo owners
As expected, D. R. Horton has appealed, and condo owners have not received a penny. Therefore, most of the leaky roofs and cracked stucco have not been repaired.
Homeowners of several planned developments and condominiums built by D. R. Horton since the mid-2000s have filed similar defect complaints against “America’s largest homebuilder,” including:
Glen St. Johns subdivision, St. Augustine, where homeowners report leaky shower stalls, and
St. Augustine and Orlando subdivisions, where homeowners are dealing with leaky roof vents.
Nearly all of the homes affected are less than 15 years old. Some are less than 5 years old. The builder blames homeowner maintenance and defective materials for water leaks, mold, and general structural damages.
But home inspectors working on behalf of consumers say the defects are mainly the result of shoddy construction.
In the meantime, D. R. Horton continues to develop several large new home communities in the Jacksonville – St. Augustine metro area.