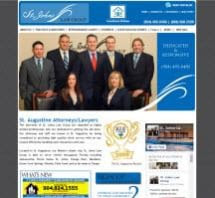 Republican Lt. Gov. Jeff Kottcamp with his arm around DOUG BURNETT, political patronage lawyer for the City of St. Augustine Beach and the St. Augustine Airport Authority; DOUG BURNETT used the words "um" or "uhh" some 51 times before St. Augustine City Commission Monday night in a losing zoning appeal that should never have been brought.


Monday night, St. Augustine lawyer DOUG BURNETT (City Attorney for the CIty of St. Augustine Beach and for the St. Augustine Airport Authority) showed up late at the St. Augustine City Commission. No worries, his dad is the commanding General of the FLorida National Guard. No problem, he worked for GEORGE McCLURE. No big deal, he is an open, public supporter of SHERIFF DAVID SHOAR (see below).

At the beginning of their meeting, St. Augustine City Commissioners postponed the zoning appeal to the heel of their docket. This was to fit BURNETT"s schedule (Airport Authority meeting).

When BURNETT showed up in his shiny shoes and shiny suit, Commissioners obligingly made those of us who had signed up for public comment wait while they waded through his appeal.
BURNETT was given, at least at the scheduling level, home cookin' favoritism, while several public comment speakers had to listen to his appeal against our will, having originally been told public comment would be before (not after) BURNETT's appeal.

City Commissioners gave him enough rope to hang himself, then voted 5-0 to reject BURNETT's zoning appeal (on a balloon-based business for U.S. 1, Ponce de Leon Blvd).

At least two Commissioners broadly hinted that if he would modify his application (for a special exception for people to ride balloons in downtown St. Augusitne) a remand might be granted. Indulgent Commissioners explained basic administrative law to BURNETT while (without taking a recess) he talked to his clients gathered in the first row of chairs, speaking so loudly many people could hear what would otherwise be their privileged conversation.

Anywhere else in the world, the attorney would take a recess and the Commissioners would be annoyed of him for wasting their time.

Anywhere else in the world, no judge or public would tolerate an attorney ignoring them while speaking repeatedly and at length to his clients.

Some judges might even call it "contempt of court."

But DOUG BURNETT is a privileged character, and Commissioners stroke his ego (instead of the other way around).

You see, DOUG BURNETT is the son of the other, elder DOUG BURNETT, commanding General of the Florida National Guard.

The Florida National Guard was a bulwark of segregationists. It is a pillar of right-wing Republicanism, which gave us that big 'ole dummy, BEN ADAMS, the erstwhile County Administrator who was unqualified for the job (now running for County Commission)(We have a copy of BEN ADAMS' personnel file, and he was decorated for the National Guard's handling of the 1972 Democratic and Republican Conventions in Miami, made famous by the movie, Born on the Fourth of July, which shows BEN ADAMS and the heroic Florida National Guard tear-gassing wounded, disabled, wheelchair-bound veterans of Vietnam (including Ron Kovic, played by Tom Cruise).

DOUG BURNETT is a supporter of embattled Sheriff DAVID SHOAR, who got his job through City Manager WILLIAM B. HARRISS.

It strongly appeared that DOUG BURNETT failed to prepare his appeal, failed to address the undisputed facts, and attempted to base his appeal on the fact that a non-expert lay witness testified about not wanting balloons marring the vista (while the facts provided by his client were more than sufficient for PZB to suggest he take their idea to the beach). DOUG BURNETT had a two-page document he prepared summarizing this argument. That was it. More preparation goes into the average dogbite case than into DOUG BURNETT's appeal of a use by special exemption that would have given his clients a new business in downtown St. Augustine.

DOUG BURNETT used the words "um" or "uh" at least 51 times, sometimes three and four in a row at Monday night's appeal.

DOUG BURNETT has more billboards and advertisements than any other St. Johns County lawyer. Is DOUG BURNETT a vacuous, inarticulate, preening, pretty-boy?

DOUG BURNETT is now the lawyer for two government agencies -- the Airport and St. Augustine Beach -- while simultaneously representing developers and bragging of his wins for them on his website. Many believe he is a walking conflict of interest, like GEOFFREY DOBSON before him (DOBSON also represented government agencies and developers).

DOUG BURNETT's being a part of the local entrenched political machine -- and his fawning support of Sheriff DAVID SHOAR (see bel0w) -- may get him clients.

But DOUG BURNETT's his lack of attention to detail and his utter lack of respect for our historic zone made his case a loser Monday night at the City Commission meeting.

Not one word on the zoning appeal appeared in any local newspaper to date.

But here's the article on the losing PZB hearing, which gives you an idea of the uphill battle his clients faced (and the folly of filing an appeal):

St. Augustine’s Planning and Zoning Board this week denied a zoning exception to AeroBalloon, a company that wants to run a commercial balloon ride attraction on U.S. 1. The vote was 4-3 to deny. John Valdes, chairman of the Zoning Board until Tuesday night, said Wednesday that the board almost voted to table the application because no one from the public turned up to comment on it.

“That’s always a good reason to table something controversial,” Valdes said. He said the balloon would have been a potential traffic hazard along busy U.S. 1. The board members also didn’t think the attraction was in keeping with the city’s historic tourism theme, and they noted that the building height limitation there was 35 feet, with a 55-foot maximum. But the balloon height while on the ground would be 75 feet and reach 350 feet while in the air. The board essentially told the applicant, “Good idea, bad location.” The property in question is at 1770 Ponce de Leon Blvd., just south of Bozard Ford’s old showroom. Knight said Wednesday that the company can appeal to the City Commission or resubmit their application if they choose another location. Valdes said the applicants were fine young people. “I applaud them,” he said. “They would probably do well at the beach.” 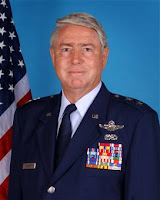 Republican Lt. Gov. Jeff Kottcamp with his arm around DOUG BURNETT, political patronage lawyer for the City of St. Augustine Beach and the St. Augustine Airport Authority; DOUG BURNETT used the words "um" or "uhh" some 51 times before St. Augustine City Commission Monday night in a losing zoning appeal that should never have been brought.
Posted by Ed Slavin at 11:00 AM