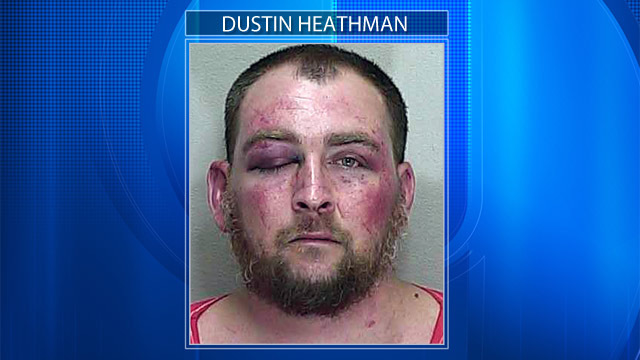 Blair is accused of lying about what he knew about a case in which his deputies allegedly used excessive force on a suspect, Dustin Heathman, who has filed a civil rights suit against Blair and the sheriff's office. Here's a copy of the indictment, courtesy of WFTV Orlando.

Ocala Star Banner: IN OUR OPINION
Editorial: A sad and embarrassing day for Marion County

The indictment and ensuing suspension of Marion County Sheriff Chris Blair cast a significant pall on the man and the office he leads and should be of great concern to the people of Marion County who elected him.

Blair was arrested on Friday after a grand jury indicted him on three felony counts: two counts of perjury and one count of official misconduct. He was suspended by Gov. Rick Scott, who tapped Emery Gainey as interim sheriff. Gainey is director of the Division of Victim Services and Criminal Justice Programs for the Florida Attorney General’s Office.

Blair’s defenders will be quick to point out that in this country we are all innocent until proven guilty. And they are right. Yet, grand juries do not return indictments lightly, especially against sitting sheriffs. The panel believed Blair lied to them, based on more than his testimony.

The particular case about which Blair is accused of lying was a piece of a larger probe into the use of excessive force within the Sheriff’s Office — spurred by the now-infamous August 2014 beating of Derrick Price in Marion Oaks. The case involved Dustin Heathman, who is now serving a life sentence for his role in a wild shootout with the sheriff’s SWAT team, also in 2014. After he was taken into custody, Heathman alleges he was beaten. The grand jury claims Blair lied about whether he saw Heathman and his wounds in the immediate aftermath of the beating. They are not inconsequential charges, especially in light of the focus of the grand jury’s inquiry.

Unfortunately, the lying charge fits a pattern of Blair making statements that have been less than truthful — and in a range of settings, from the campaign trail to County Commission meetings to interactions with this newspaper. Even before Blair was elected, State Attorney Brad King warned that he played fast and loose with the rules when he was MCSO’s top detective. Blair’s fine by the Florida Commission Ethics for financial irregularities during the 2012 campaign — and his denials of misconduct — further tarnished Blair’s credibility.

Blair will surely contest the charges. Yet, his continued candidacy for sheriff should be questioned. There is little likelihood the case will be resolved by the August primaries and, frankly, Blair is facing knowledgeable, credible, experienced opponents in Republicans Kerry Crawford and Billy Woods and Democrats Ed Dean and Dennis McFatten.

Moreover, no segment of the community will suffer more from the fallout of the indictment than the nearly 800 employees of the Sheriff’s Office. Already there is uneasiness and fear among many of its employees about what comes next. Who might be next? Who will be the boss tomorrow, next month, after November?

We urge the people of Marion County to show their support and respect for the men and women of the Sheriff’s Office during what is a difficult time for them on and off the job.

Accusations that there is a “culture of violence” in the Sheriff’s Office by both outside investigators and former employees has led to the imprisonment of four former deputies and the trial and acquittal of a fifth. Now, the sheriff is under indictment and suspended as part of that investigation.

It is a time like this when a man hopes he has a good reputation to fall back on. Regrettably, Blair forfeited that long ago in too many circles. No matter what happens next, this was a sad and embarrassing day for Marion County.
Posted by Ed Slavin at 3:44 AM