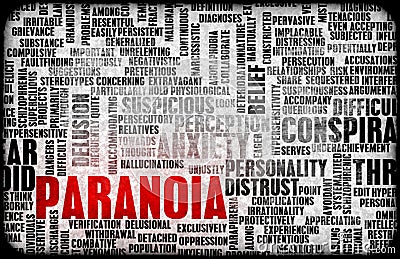 par·a·noi·a
ˌperəˈnoiə/
noun
a mental condition characterized by delusions of persecution, unwarranted jealousy, or exaggerated self-importance, typically elaborated into an organized system. It may be an aspect of chronic personality disorder, of drug abuse, or of a serious condition such as schizophrenia in which the person loses touch with reality.
synonyms: persecution complex, delusions, obsession, psychosis
suspicion and mistrust of people or their actions without evidence or justification.

On January 12th, 2016 media reports circulated that the body of Michelle O’Connell was removed from her place of rest by certain (sic) members of her family. At the time, no one was certain (sic) exactly why this was done but the speculation was that a paid (sic) expert witness would be hired by these family members to produce a report that of course would support their belief about the case. Today we learn that this speculation was accurate. The report of the paid (sic) expert was delivered by a resident of Clay County who has a “private investigators” (sic) license with no connection to any official entity including law enforcement. It is critically (sic) important to note that no person officially associated with a prosecutor’s office or law enforcement agency was in any way involved including when she was removed from her place of rest. Why did these certain (sic) family members not request a judge to order a proper and officially sanctioned exhumation? We suspect the answer is that they would not have met the threshold for a judge to order one. Most importantly, there have been three separate officially sanctioned medical examiners review this case as well as two officially sanctioned special prosecutors (Jeff Ashton and Brad King) appointed by the Governor, all have determined there is NO (sic) evidence present to indicate anything other than that Michelle died by her own hand. The last special prosecutor went so far as to write that he was, “thankful it was NOT a homicide because had it been, it could never have been prosecuted due to the actions of the state agent who at one time was involved in this case.” The information presented today is nothing new and all was reviewed during the initial autopsy. Molesting Michelle from her place of rest using some freelance type approach is beyond unconventional, it was reprehensible.

The primary advisers to the few family members who will go to any lengths to maintain their moment in the spotlight consist of the private investigator, a former St. Johns County Deputy Sheriff who was fired for ethical (sic) misconduct and who is now a candidate for political office. Interestingly, this same individual has been hinting at some recent political events that there was some “big news” coming regarding the O’Connell case. Coincidently, the last time Michelle’s sister was interviewed on local television she actually told the reporter that this case is about, “politics”. Though thereporter (sic) never followed up on her comment, as the political season evolves it has become very clear what she meant. And finally a career “drug” investigator and current state agent who was recently reprimanded for conducting a “substandard” investigation into the death of Michelle O’Connell.

A great (sic) question for the public and media to ask would be, why hasn’t the family filed suit against the person they think was culpable in Michelle’s death? The answer is probably the same as why they did not seek an official exhumation, because there is no Probable Cause to indicate Michelle died by anything other than her own hand. Of vital importance that most folks do not understand is that the person that certain (sic) members of the family think is culpable in Michelle’s death, is one of only two people (along with Michelle’s brother Scott) who HAS filed a civil suit in relation to this case (against FDLE and Agent Rodgers). People who are culpable or have committed crimes do not file civil suits because when they do, they can longer shield themselves behind the Fifth Amendment and a civil suit puts everything under a microscope. Fortunately, the civil suit filed by Michelle’s brother Scott and Jeremy Banks is well under way and hopefully (sic) there should be closure within the next year. I have always taken the position that if a jury ever gets to hear what Scott and Jeremy had to endure because of the conduct of a few people with personal agendas, it would shock their consciences and they would rule in favor of both Scott and Jeremy, I still maintain that position.

The record (sic) clearly (sic) shows that we (sic) have always (sic) held employees accountable (sic) at the St. Johns County Sheriff’s Office when they violate our policies or engage in criminal conduct. In the past, I have had to discipline and even arrest employees for misconduct. If, however, an employee is unfairly and maliciously targeted by external forces (sic) they will have no stronger advocate than myself. (sic) This case is an example of the latter and not the former.

COMMENTS
flg8rlvr 05/23/16 - 08:23 am 22Sheriff Shoar
Could you please do this community a favor? If you are going to release a statement concerning events happening around you, could you, at the very least, stick to facts as they are presented and not innuendo and downright lies? It seems the person writing your press release wants to gain some added attention by trying to throw gasoline on an already hot topic. The public is watching the O' Connell case closely, as you well know, and your political career is banking on this case, just as you allude to your challenger doing. How much Kool-aid do you think we need to drink before we all fall for your version of this story? As a child I was always given this advice, "there is your side of the story, the other person's side of the story, and somewhere in-between lies the truth". The truth, in this instance, lies in the evidence and perhaps the lack thereof. We must rely on science, not your or your office's interpretation of the science. You are not a forensic scientist, in fact, you were not even present the night of this horrible event. The public has seen how your office conducted it's investigation and at best we can call it, shoddy. The longer you stay in office and put out such press releases, the more I believe you suffer from CTE. I can come to that conclusion because I watched a movie about it once. And even though I am not a pathologist or neurologist I can see you exhibit the symptoms: delusions, memory loss, confusion, impaired judgment, impulse control and aggression. Perhaps you should head to your physician and have this checked out immediately. It will only get worse. This county needs a Sheriff that can handle difficult situations with a level head. You have not exhibited an ability to do that, especially where this case is concerned. You have tried, at every twist and turn, to discredit the family for wanting answers for their loved one. It doesn't matter if this was "one of your own", so were the members of the family. You have tried to discredit anyone that has helped them and resorted to name calling and bad mouthing. Everyone involved deserve better from you and the organization you represent. They deserve the truth. We deserve the truth. We need a new direction.

JoeJoe 05/23/16 - 09:56 am 00Sheriff Shoar needs to go
His department is out of control, his budget is bloated with ridiculous unnecessary toys, and he appears arrogant and aggressive. Can you believe we have a tank?
Posted by Ed Slavin at 7:45 AM

He killed Michelle he needs to burn for it. My first thought was he killed her she wasn't the type to harm herself. All the evidence points to foul play and murder. It makes me sick that it would be covered up because a dirty cop killed her