Some five residents righteously raised concerns about appointments by City Manager JOHN PATRICK REGAN, P.E. to some dumb 'ole mobility task force, 40% of whom are nonresidents and one of which (WOLFGANG SCHAU) is apparently still not a U.S. resident (having serve on the Visioning 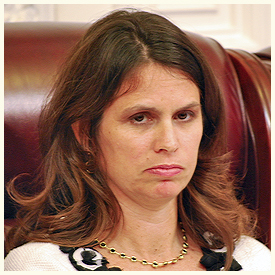 Committee, SCHAU is most noted for being pals with the REGANS and for having spoken during the "WISIONING COMMITTEE, SCCHAU's pronunciation,during a breakout meeting -- yes, I've got really good hearing -- about wanting to run the homeless off King Street).

So, after 9 PM on Monday, May 23, 2016, two-term recumbent indulgent indolent City of St. Augustine supercilious somnolent superficial Commissioner LEANNA FREEMAN euchred Commissioners into postponing examination of the appointments for the mobility group until June 13, 2016, some twenty (20) days later, on the spurious basis that The St. Augustine Record and citizens had left the meeting -- "We've lost the St. Augustine Record and we've lost our audience," FREEMAN whined."
This sick chick's commercial landlord is none other than Pierre Thompson, grandson of The St. Augustine Record's landlord, who destroyed and molested a bald eagle nest tree on October 8, 2001 and his real estate company was finally prosecuted, paid one-third of a million dollars and sixteen acres of mitigation to our federal government. If he had violated three federal criminal laws designed to protect our national symbol in East Texas, unpatriotic St. Augustine capitalist Pierre Thompson would have gone to prison for molesting eagles.
Lookie here! Vintage 2008 St. Augustine Record editorial in which ex-Mayor LEN WEEKS' buddy, LEEANA S.A. FREEMAN, claims to be independent and wants to take on City pollution! She never did. She never has. It's time for her to go. But how interesting that in 2008, she claimed to want greater public discussion. Perhaps she shut her mouth when ex-Mayor CLAUDE LEONARD WEEKS, JR. agreed to floor plan her campaign, like the used car dealer that she resembles (and her former law partner SUSAN BURK's boyfriend was, at Sebastian Avenue, a five foot street built by former City Manager WILLIAM BARRY HARRISS to cadge FREEMAN's vote; HARRISS is now Sheriff SHOAR's consigliere).

Freeman gets the nod

will bring a new voice to the table later this year.

Leanna Freeman, an attorney, owner of two local businesses, and a former member and former chairman of the city's Planning and Zoning Board.

Peter Romano, president of the Lincolnville Neighborhood Association, a retired financial manager and human resources manager, who also dealt in politics in Oregon.

Dan Sullivan, president of the St. Augustine Uptown Neighborhood Association, a former business agent for the International Union of Operating Engineers, also in the private business sector in Pennsylvania and in St. Augustine. Though retired, he has chaired the St. Augustine Parking and Traffic Committee for the past five years.

All three bring community activism to the race.

The three-way race on the Aug. 26 primary ballot is for the non partisan, four-year seat being vacated by veteran Commissioner Susan Burk. She has chosen not to see reelection. Freeman is her law partner.

If one candidate doesn't get 50 percent of the vote plus one vote in the primary, then the top two will run off in the Nov. 4 general election.

Freeman grew up in St. Augustine on the fringe of Lincolnville on Cedar Street. Her theme is quality of life, a focus on how the city's infrastructure, economy and residents shape it. She wants more of the bed-tax spent on St. Augustine especially downtown. She says her background as a lawyer will be vital in reviewing proposed city contracts such as the franchise contract up for renewal with Florida Power and Light. She supports underground utilities, working to put them in one street a year; an adopt- a-tree program by residents to enhance the tree canopy, and the city's approach to a partnership on homeless issues with the county, even if it has to be forced.

She wants open discussions at commission meetings between the staff and the commission on the resolution of problems such as the broken pipe that spewed treated wastewater over a salt marsh habitat. An initial proposal three years ago proved too costly. A plan for a fix was not discussed in an open meeting but rather by the city manager, one-on-one, with each commissioner. Freeman said she wants those kind of those discussions in a public meeting.

Romano wants the city to treat the needs of Lincolnville as it does those elsewhere in the city. He said that neither the illegal dumping, nor the broken pipe, both in Lincolnville, should have been allowed to happen. He supports a long-range comprehensive plan for the city, a neighborhood bill of rights, more accountability between citizens and their city commissioners, a partnership on resolving the homeless situation, and better allocation of bed-tax dollars for St. Augustine tourism.

Sullivan has chaired the city's parking and transportation committee through contentious periods in the discussion of a parking garage and raising parking rates. The commission approved the parking garage and a revised parking system. Sullivan advocates a bigger share of the county's bed tax because "St. Augustine is the biggest draw." He supports a vendor advisory board on use of the public square at the VIC parking facility and a city maritime committee. The city is on the right track to help the homeless, he said.

The candidates brought strong ideas to the table but the one we recommend is Freeman. We encourage a vote for her in the Aug. 26 primary.

* Petty cash expenditures are realized when the funds are withdrawn for petty cash. Therefore, the referenced item is not included in the total.
Go Back
Posted by Ed Slavin at 10:34 AM