As Florida shatters its record for new coronavirus cases, Democrats ask, ‘Where is Ron DeSantis?’ (WaPo) 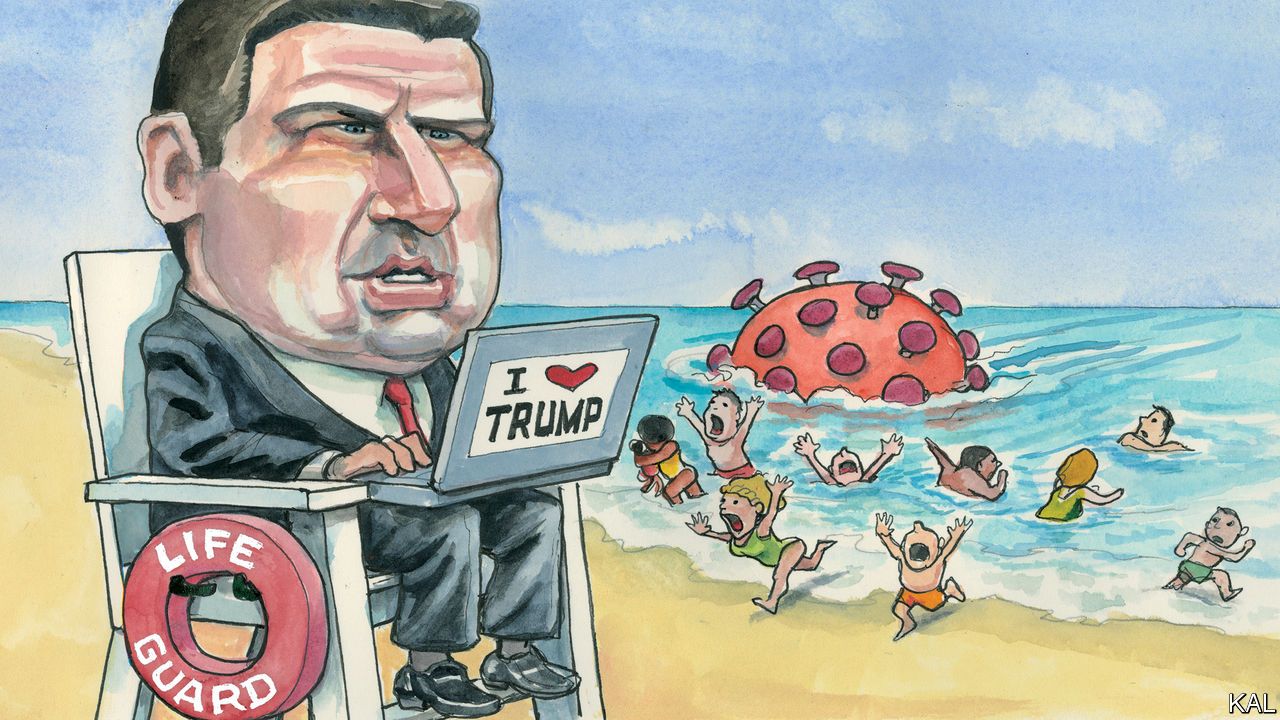 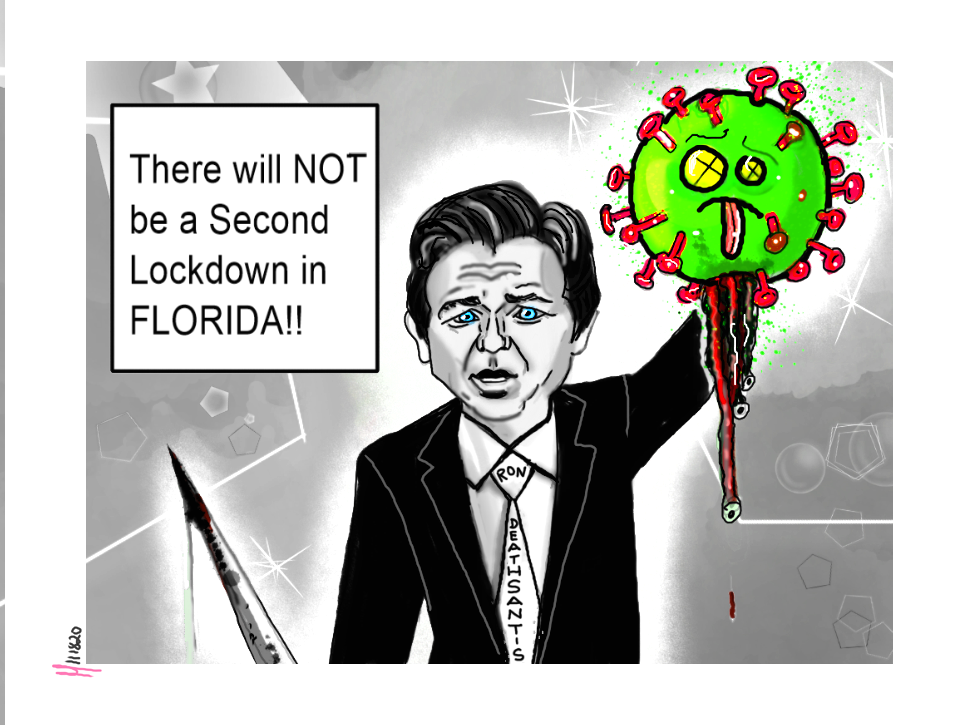 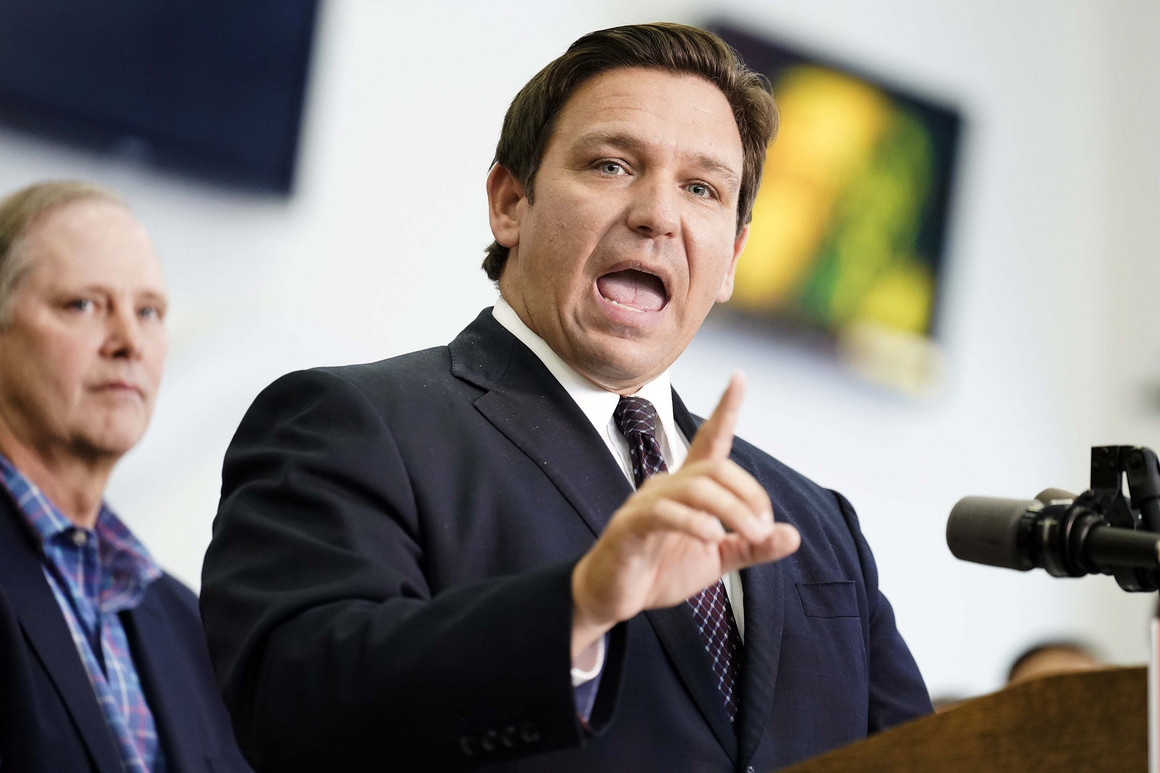 Is disappearing demagogic Florida Governor RON DeSANTIS a disgrace to the Nation? Is he a barnacle on the underbelly of our Ship of State?

Does he deserve re-election as Governor of Florida?

What is the Governor's COVID performance art all about? Is it flummery, dupery and nincompoopery?

Is this all about RONALD DION DeSANTIS cadging more millions of secretive PAC contribution dollars and pandering to extremist votes to run for President in 2004?

You tell me. l

Is DeSANTIS a one-term Governor?

You won't be reading this story in the Incredible Shrinking St. Augustine Record, which once subscribed to the Washington Post News Service under prior conservative ownership by Morris Communications.  That subscription disturbed some local bumptious Bubbas, who flexed their muscle and complained.  Undeterreed, Morris continued printing occasional Post stories.

Is GANNETT's thin St. Augustine Record a shadow of its former self?

Is GANNETT's SAR failing to fulfill the watchdog function our Founding Fathers intended in writing the First Amendment and our Bill of Rights?

As Florida reported nearly 47,000 new coronavirus cases, again shattering its single-day record since the start of the pandemic, Democrats and critics called on Gov. Ron DeSantis (R) to do more to address the state’s spike in infections driven by the highly transmissible omicron variant.

The state on Wednesday reported 46,923 new cases from Tuesday, as the omicron surge nearly doubled Florida’s previous peak over the summer. The state, which broke the record for new daily infections that was just set on Christmas Eve, is averaging more than 30,300 new coronavirus cases a day, according to data tracked by The Washington Post — second in the nation to New York.

While deaths continue to decline in Florida — an average of 18 a day as of Wednesday — the number of cases has exploded by 182 percent compared with the previous seven-day period. Florida now has reported 4 million total cases since the pandemic began, joining California and Texas as the only states with at least 4 million coronavirus infections since 2020.

Tracking U.S. covid-19 cases, deaths and other metrics by state

Amid the surge, some in the state have argued that DeSantis, who recently signed multiple bills into law to curtail vaccine and mask mandates, has not done enough to help against the omicron variant. Orange County, Fla., Mayor Jerry Demings (D) said at a news conference this week that counties have yet to receive funding for increased coronavirus testing during the holidays. He also questioned why DeSantis has been largely absent during the state’s record-breaking period.

“We have not received any assistance from the state of Florida at our testing sites,” he said on Tuesday. “Our residents, all Florida residents, should be outraged and they should ask the question, ‘Where is our state? Where is our governor? Where is Ron DeSantis now?’”

"Where is our governor? Where is Ron DeSantis now?" — Mayor Jerry Demings, Orange County, Florida

Many are wondering where the Florida governor is as COVID cases surge by more than 1,000% since DeSantis's last COVID press conference on 12/17. pic.twitter.com/xLoKdLMDfV

DeSantis, one of the most prominent Republican critics of President Biden’s handling of the pandemic, has not made a public appearance since a Dec. 17 news conference, according to Florida Politics. DeSantis also appeared on Fox News on Dec. 19, saying that he had yet to receive a coronavirus booster shot.

“I’ve done whatever I did, the normal shot, and that at the end of the day is people’s individual decisions about what they want to do,” the governor told Fox News host Maria Bartiromo at the time.

Christina Pushaw, a spokeswoman for DeSantis, told The Washington Post on Thursday that the omicron variant is responsible for most of the new cases in Florida, adding that many of the new infections appear to be “asymptomatic or mild.” She noted how states such as California and New York are also breaking records for new infections, saying it is “evident that the vaccine passports, mask mandates and other heavy-handed government interventions did not achieve their stated goals.”

“In Florida, we are continuing to emphasize the importance of early treatment and doing everything possible to expand access to clinically effective treatments,” Pushaw said in a statement. “Governor DeSantis is not imposing any mandates or lockdown policies that have already proven ineffective in other parts of the country.”

More than 4,400 people in Florida are hospitalized with covid-19, the disease caused by the virus, including 498 in the intensive care unit. Although the hospitalization rate has increased by more than 100 percent compared with last week, Pushaw argued that “the percentage of cases requiring hospitalization as of now is lower overall than we saw with previous variants.”

The spike in Florida comes as coronavirus cases are soaring nationwide, with the United States averaging about 240,000 new infections a day. Ahead of New Year’s Eve, Anthony S. Fauci, the nation’s top infectious-disease expert, has urged Americans to rethink any potential party plans and encouraged smaller gatherings to help prevent the spread of the virus.

Rochelle Walensky, director of the Centers for Disease Control and Prevention, told reporters Wednesday that hospitalizations remain “comparatively low,” noting that those totals tend to lag behind infections by about two weeks. She emphasized that omicron appears to cause milder symptoms, especially for vaccinated people.

In Florida, 63 percent of the population is fully vaccinated, which is just above the national rate of 62 percent.

Since DeSantis’s last appearances, cases have skyrocketed in Florida and across the country thanks to omicron, which is now the nation’s dominant coronavirus variant.

The DeSantis administration has recently focused on the federal government’s pause on distributing monoclonal antibodies that have been used as treatment for many coronavirus patients who have not been vaccinated. Florida Surgeon General Joseph Ladapo recently accused the Biden administration of “actively preventing” the distribution of the monoclonal antibody treatments from Regeneron Pharmaceuticals and Eli Lilly. The government noted that the treatments were unlikely to be effective against the omicron variant.

The state on Wednesday reported 46,923 new cases from Tuesday, to Health and Human Services Secretary Xavier Becerra, Ladapo wrote that the pause from the administration would cause an “immediate and life-threatening shortage of treatment options.” DeSantis has touted monoclonal antibody treatments, specifically Regeneron, as an effective way to keep people out of the hospital.

Many of the new cases are coming from South Florida, where the state’s three most populous counties — Miami-Dade, Broward and Palm Beach — saw their case totals increase by close to 400 percent in the week ending Dec. 23, according to the Miami Herald. Jason Salemi, an epidemiologist with the University of South Florida, told WPTV that omicron outpacing the delta variant could be cause for concern for the state’s hospitals. It took more than a month for delta to average 21,000 daily cases.

For perspective, it took about 36 days from the initial increase in cases until we eclipsed 21,100 average daily cases during #delta.

It's happened in one-third of that time - 12 days - during #omicron.

Our 7-day avg right now is only ~500 cases below our all-time high.

Pushaw said that the Jackson Health System in Miami reported Thursday that more than half of its patients who tested positive for the virus were “incidental positives” — “people who were admitted to the hospital for other reasons (not covid-19 symptoms) and incidentally tested positive upon admission.”

More than 776,000 new coronavirus tests have been administered in Florida over the past seven days, the second-highest total in the nation, according to data tracked by The Post. Twenty-two percent of those tested were positive. Raul Pino, director of the Florida Department of Health in Orange County, acknowledged the lack of resources for even more testing in the area. Not even adding more testing sites could prevent the department from being overwhelmed, he told the Associated Press.

“A lot of people are wanting to get tested,” he said.

Some on social media documented the long lines for in-person testing in the state. A video posted to Twitter by Brian Entin, a journalist with NewsNation Now, showed the miles-long line of cars waiting to enter Miami-Dade County’s 24-hour testing site on Wednesday night.

“This is the wait before you even get into Tropical Park where you have to zig zag around cones before the testing area,” he tweeted.

The line to get into Miami-Dade’s 24 hour COVID testing site is miles long right now. This is the wait before you even get into Tropical Park where you then have to zig zag around cones before the testing area. pic.twitter.com/4VpPzR7glf

Democrats and critics were quick to accuse DeSantis of being “MIA.” State Sen. Annette Taddeo (D), who is seeking the Democratic nomination for governor in 2022, shared a message that she purportedly received from a friend about a difficult situation at a hospital in her district.

“And where’s Ron DeSantis?” she tweeted.

On MSNBC, Florida Agriculture Commissioner Nikki Fried, who is also running for the Democratic gubernatorial nomination, was asked by host Tiffany Cross on Wednesday whether she knew why DeSantis had not made a public appearance during the holiday surge.

On Thursday, as DeSantis’s name trended on Twitter, Pushaw tweeted that the governor “has a wife and 3 kids ages 1-5, and it’s not surprising if he wants to take a few days off at Christmas to spend time with his family, especially as his wife is battling cancer.”

“I don’t criticize Biden for going to Rehoboth Beach all week, right?” she wrote.

Biden spent two days at Rehoboth this week before traveling to his family home in Wilmington, Del., on Wednesday. The president canceled plans for a holiday trip to Puerto Rico in the face of the omicron surge.

By Timothy Bella
Timothy Bella is a staff writer and editor for the General Assignment team, focusing on national news. His work has appeared in outlets such as Esquire, the Atlantic, New York magazine and the Undefeated.  Twitter
Posted by Ed Slavin at 4:00 AM