New Flagler College President John Delaney recently quoted about his late friend, Bishop Desmond Tutu, who was a scholar in residence at University of North Florida during Delaney's term as President.

Flagler College is recovering from the era of Jim Crow segregationists like Vice President A.H. "Hoppy" Tebault and disgraceful maladroit "Massa Proctor," WILLIAM LEE PROCTOR.  PROCTOR was Chancellor and before that, President.

Perhaps the meanest man in St. Augustine, PROCTOR "retired' abruptly after giving his deposition in a case involving his coverup of sexual harassment of students and retaliation against the acclaimed professor who reported it, only to be fired.

His "retirement" was not reported for multiple months for the reliably lazy, louche and lackadaisical St. Augustine Record, but was reported on this blog.

The case was settled. 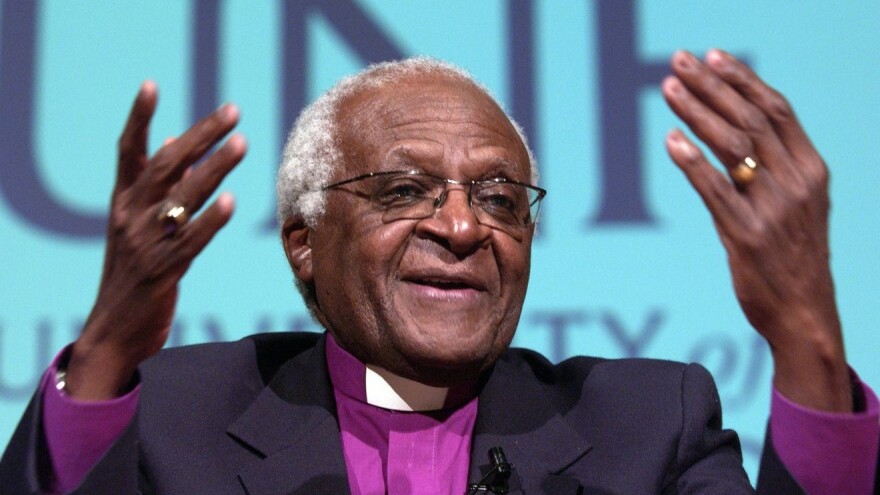 The late Nobel laureate and respected anti-apartheid leader, Archbishop Desmond Tutu, receives an honorary degree in 2005 at the University of North Florida. He previously taught at UNF and also donated his collection of manuscripts and other documents to the university.

The late Nobel laureate and renowned anti-apartheid leader Archbishop Desmond Tutu had strong ties to Jacksonville, especially the University of North Florida where he served as a scholar in residence for a semester.

John Delaney, former Jacksonville mayor and past UNF president, was among those mourning the passing of the global civil rights leader on Sunday.

Tutu was a man of integrity, wisdom and compassion with a sense of humor, Delaney told The Florida Times-Union.

Tutu had brilliance and compassion that never dimmed.

"He could say something funny and profound and religious in one sentence. …He knew what he was and what he believed. And he had an instinct to find the right way to convey it," Delaney said.

On the level of Tutu: Bishop translated 'Silent Night' poem into a song

UNF President John Delaney: What Jesus might do on gay rights ordinance

Tutu won the Nobel Peace Prize in 1984. The South African cleric's ties to UNF dated back to 1999 when he first came to the university to deliver a Presidential Lecture.

In 2003 he returned to UNF as a scholar in residence for a semester teaching classes for students as well as speaking at numerous Jacksonville churches, schools and community activities. He emphasized helping those less fortunate.

Tutu came back in 2005 to accept an honorary doctorate of humane letters degree. Delaney presented the degree to him.

"He had a grin, and a wit and a sense of humor about him and was whip-smart. He was just a fascinating man, just a giant," said Delaney, who was mayor when he first met the archbishop.

In 2018 Tutu donated a collection of his most significant writings — manuscripts, letters and notes — to UNF's Thomas G. Carpenter Library. Tutu authored many of the writings while he was a scholar in residence there.

A special connection between Tutu and Delaney

Retired and in frail health, Tutu was unable to travel to Jacksonville from Cape Town to make the presentation.

But his representative told the audience that Tutu was giving the writings to UNF in honor of Delaney whom Tutu described as "a wonderful friend." The donation came as Delaney was preparing to retire from UNF after guiding it for 15 years.

Humbled by that praise, Delaney said Sunday that despite his respect and admiration for Tutu, "it would be too presumptuous of me to say Tutu was a friend."

But in those short few hours and days that Delaney knew Tutu, he said "I loved the guy."

Tutu kept in touch with Delaney over the years.

"I just marveled that I'd get a text or an email once or twice a year just kind of out of the blue from him for no reason," Delaney said. "It would be just a quick sentence or two maybe."

"Mr. Prez is how he'd start it," he said. "Of the hundreds of thousands of people in the world that he knew, why he would do that. We didn't go into long exchanges, but he would say 'God bless or thanks,' and then six to nine months later, another one would pop up." 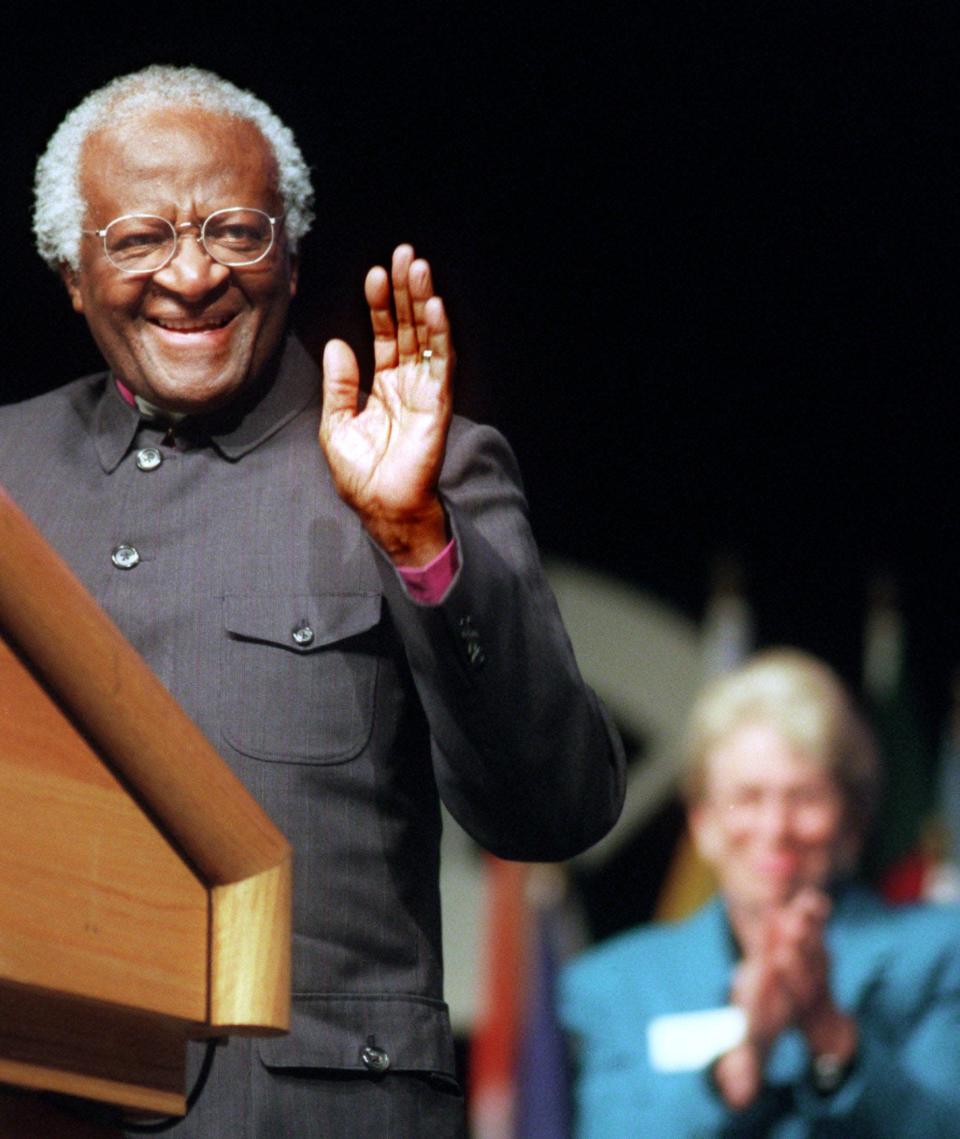 The late Archbishop Desmond Tutu gets a warm welcome in 1999 during the Presidential Lecture Series at the University of North Florida including by UNF President Anne Hopkins in the background.

Tutu never backed down from speaking the truth about contentious subjects, Delaney and others said.

"I’ll never forget when Archbishop Tutu spent some time teaching at @UofNorthFlorida. And he was so gracious - he wrote a letter in support of the #jaxHRO when asked by@JaxEquality," Midyette said on Twitter.

Delaney recalled Tutu noted that Jesus didn't speak on sexuality except to condemn lust and adultery.

Delaney also quoted Tutu as saying "who would choose to be among the most hated people in the world. Clearly, it's not a choice. It's how gay people are born and God loves all the people."

Delaney added that Tutu voiced his beliefs "so simply and succinctly with clarity. He knew who he was and what he thought."

He wanted his writings placed in the university's archives and made available for institutional research by faculty and students, his longtime friend, Kamele "Oupa" Seane, UNF associate director of outreach for the Commission on Diversity and Inclusion, said at that time. 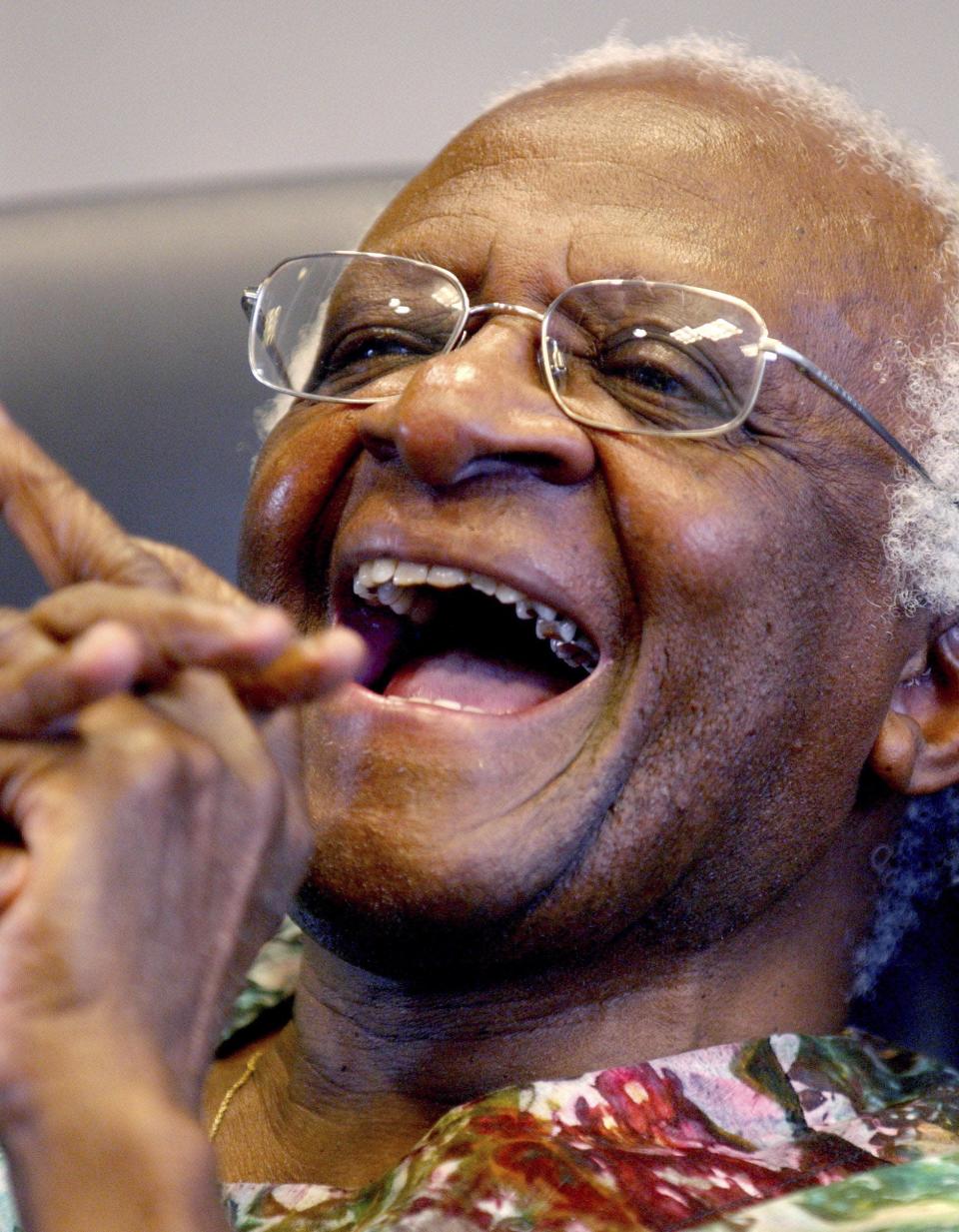 The late Archbishop Desmond Tutu laughs after answering a question about local reaction to his speech at a peace rally in Jacksonville in 2003. Tutu spent a semester as a visiting scholar at the University of North Florida.