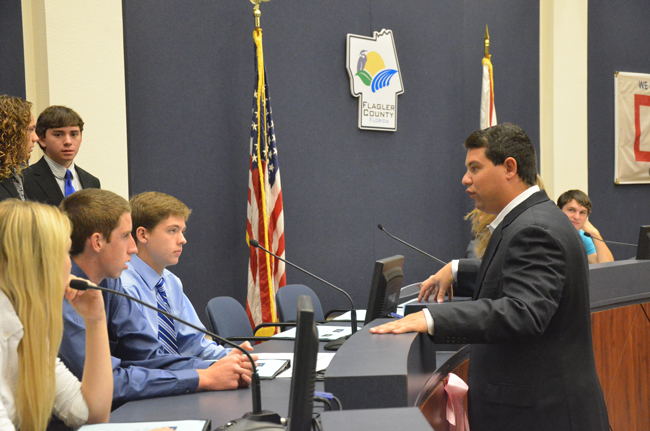 Here's yet another dull, shallow, censored news story vaguely reporting on developer codlock on St. Johns County Comnmission, omitting the role of blowhard bully State Senator TRAVIS HUTSON (R-HUTSON COMPANIES) in SILVERLEAF.
Pitiful Dull Republican local news media won't eeven talk about the appearance of impropriety and conflicts of interest inherent in spoiled scion TRAVIS HUTSON sponsoring legislation to curb our rights by allowing business owners to sue governments for dqamages if their profits fall 15% as a result of any government action, while curbing local government rights to regulate polluters.
From News4Jax: St. Johns County commission approves 2,300-acre SilverLeaf expansion despite opposition Commission voted 4-1 in favor of 5,600-home expansion A massive housing development in St. Johns County is getting even bigger. ST. AUGUSTINE, Fla. – A massive housing development in St. Johns County is getting even bigger. The St. Johns County Board of Commissioners on Tuesday morning approved a controversial expansion of SilverLeaf, a new development located in northwest St. Johns County. The new plan will add more than 2,300 acres of land to the development, providing room for up to 5,600 more dwelling units to the development and another 250,000 square feet of office space. The added units would be split into 3,000 single-family units, 600 multi-family units and 2,000 age-restricted units. There was plenty of pushback from the community surrounding the proposal. People in the area sent dozens of emails to commissioners to oppose the expansion, and some spoke at Tuesday’s commission meeting about potential problems like traffic and environmental impact. “Do you have any specific factual evidence today that if we approve this project, we’re going to endanger lives on the highway?” St. Johns County Commissioner Jeremiah Blocker asked one of the public speakers. “Well, of course not, but how could I?” said Al Abbatiello, chairman of Bartram Scenic & Historic Highway Corridor Management Group who was there representing about 35 community members. “But the fact of the matter is traveling requires vehicles on the roadway. We’ve talked about currently, with the total approved, you’re looking at 16,300 residents, and that means approximately 2.3 vehicles per home. You’re looking at thousands of new vehicles on roadways, which are already congested, which you have to admit they are already congested.” A representative for the developer — The Hutson Companies — said traffic won’t be a major issue because the expansion will coincide with the addition of the First Coast Expressway, which is expected around 2030. Approved expansion of SilverLeaf development in St. Johns County. (Copyright 2021 by WJXT News4Jax - All rights reserved.) The sprawling community is located between County Road 210 and State Road 16, and hundreds of homes have been built in the last few years. The expansion approved Tuesday will take the development across State Road 16 and expand past County Road 13. Ad When completed, the project will include: 16,300 residential units 2 million square feet of retail space 900,000 square feet of office space 300,000 square feet of hospital space Around 10,900 acres in total land use All of the plans were approved by a 4-1 vote, with commissioner Paul Waldron being the only “no” vote. Construction will be going on for a long time. The development won’t be completed until 2047. Copyright 2021 by WJXT News4Jax - All rights reserved.
ABOUT THE AUTHOR: Travis Gibson Digital reporter who has lived in Jacksonville for more than 25 years and focuses on important local issues like education and the environment.
Posted by Ed Slavin at 3:25 AM